Not down for the count 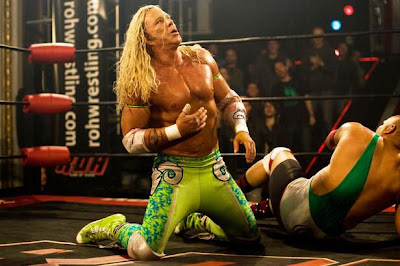 By Edward Copeland
On one episode of TV's M*A*S*H, Maj. Charles Emerson Winchester remarks that he does one thing at a time, he does it well and then he moves on. In a way, that applies to Randy "The Ram" Robinson in The Wrestler as well, only he can't move on because wrestling is the only thing he's ever done well, even though he's far past his prime.

Recent evidence would make you think that might be the case with Mickey Rourke, who plays Randy, as well. With the exception of being the best part of Sin City, he's toiled for decades in mediocre films, small parts or odd appearances that made moviegoers ask, "Is this the same guy who was so great in Diner? Angel Heart? Barfly? The Pope of Greenwich Village? What the hell happened?"

The scars show on his face in The Wrestler, but Darren Aranofsky's film also uncovers that a great actor still breathes beneath the bruises. It's 20 years since The Ram's heyday and while he still draws fans at smaller wrestling circuits, he has to make ends meet by working at a supermarket.

The closest thing he has to a friend is a pole dancer (Marisa Tomei) he occasionally pays for a lap dance. When some bad health news changes the outlook for Randy's future, he looks to make amends by reconnecting with his estranged daughter (Evan Rachel Wood) and charting a new course for himself.

Aranofsky tells a tough yet tender slice of life in The Wrestler, with nothing that resembles the man who made Pi and Requiem for a Dream. In perhaps the most brilliant shot of the film, Aranofsky pays homage to Scorsese's tracking shot in Raging Bull as Randy hears the growing sound of the crowd in his head only to come out not to the arena and the ring but the grocery's meat department.

Tomei and Wood both are good, but this is Rourke's show from beginning to end. Comebacks happen often, but few seem as deserved or as worthy of adoration as Rourke's. Let's just hope it continues beyond The Wrestler. We missed you, Mickey.