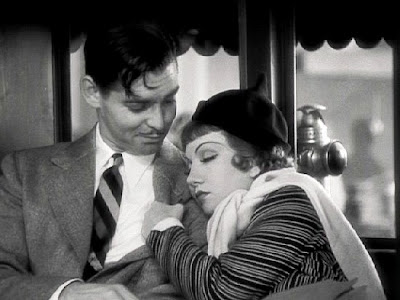 By Edward Copeland
One thing is certain when Hollywood gathers tonight to hand out the Academy Awards for the 81st time: No film has a chance of sweeping the top 5 categories of picture, director, actor, actress and writing. Seventy-five years ago today, a film was released that would be the first to achieve that feat and only two other films have equaled it since. Though It Happened One Night may be 75 years old, it may be the best of the three films that have pulled off the sweep.

Director Frank Capra won the first of his three Oscars for It Happened One Night. Capra, at least as far as I'm concerned, always has had an unfair reputation as a corny sentimentalist as a director and while that description could certainly apply to some of his movies, it by no means apply to them all and, in his best films, that sentimentality is usually earned. It Happened One Night certainly doesn't fit into that pigeonhole: It's just a solid romantic comedy — and the romance comes late, sentiment is in very small doses and there's nary a trace of corniness to be found.

What you do find though is the very essence of romantic chemistry between its Oscar-winning stars Clark Gable and Claudette Colbert. As individual characters, the actors are just as winning. Colbert's portrayal of Ellie Andrews, the spoiled heiress determined to marry a man her father despises is great, even though she speaks the truth when she tells her dad (the great Walter Connolly) that they come from a long line of stubborn idiots. You can hardly blame her dad, since the man Ellie wants to run off and make her husband is King Westley (Jameson Thomas), a too-old dandy of a playboy. Gable is a comic dynamo as Peter Warne, the reporter we first see stinking drunk in a phone booth telling off his editor in front of a crowd of spectators. Re-watching the movie, it occurred to me how, even when it was a negative portrayal of yellow journalism, old films seemed to have a better take on the newspaper journalist than any films made today. So few are even made today and when they are, they usually are laughably ridiculous. (I'll give only one example: Drew Barrymore in Never Been Kissed who is supposed to be a copy editor and has her own office. That's funny enough, even before she gets her undercover reporting assignment.) When fate gets in the way of the last seat of a bus bring Peter and Ellie together, so comes the road trip and the sparks. The memorable scenes pile up one after another. There's the encounter on the bus with the now-forgotten character actor Roscoe Karns as Shapeley. There's the hysterical hitchhiking scene (remember, the limb is mightier than the thumb). The car ride with Alan Hale Sr. The Walls of Jericho, built out of blankets. Perhaps the most magical scene is when Ellie asks Peter if he's ever been in love while they are on opposite sides of the blanket and the wiseacre gets serious for a moment, wistfully describing the kind of woman that could capture his heart while we see Ellie slowly melt on the other side of the blanket. Seventy-five years later, the performances are still great, the laughs are still solid and the romance is still earned. If there are Walls of Jericho that prevent modern moviegoers from letting themselves enjoy the charms of It Happened One Night today, I say, "Let them topple."

FUN NOTE: I finally saw Clint Eastwood's Changeling last night and Angelina Jolie's character puts two dollars on It Happened One Night to win best picture in an Oscar pool, which is the first time I can remember an Oscar pool ever being referred to in any film.