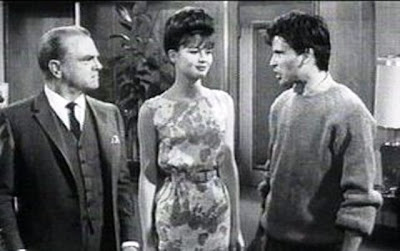 By Edward Copeland
Certainly there are other films that Billy Wilder made that I love more than One, Two, Three (Sunset Blvd. is in my all-time Top 10), but the more I see it, the more I realize that Wilder may never have made a movie that's as much fun. James Cagney may have achieved stardom in gangster films, but if you put all those together, I doubt the machine gun fire contained within would come close to equaling the speed of the rat-a-tat-tat dialogue that he fires in this Cold War (and cola war) comedy. No wonder Cagney decided to quit movies for 20 years after this — he must have been exhausted and needed that long to catch his breath.

Cagney stars as C.R. MacNamara, a Coca-Cola executive in Berlin with a penchant for philandering and a dream of being put in charge of Coke's entire European operation. His wife Phyllis (a great Arlene Francis) longs to return to Atlanta, which C.R. describes as "Siberia with mint juleps." C.R.'s dream of European success had been scuttled once before when Benny Goodman missed a plane. Now, C.R. finds his life complicated when a top Atlanta executive (Howard St. John) assigns him to keep watch over his free spirit daughter Scarlett (Pamela Tiffin), who has been wreaking havoc throughout Europe.

C.R. reluctantly agrees to put Scarlett up, seeing it as his springboard to the top. Unfortunately, Scarlett finds romance, though she insists it's with a "Republican" only she means from the Republic of East Germany. He's Otto, an honest-to-God committed communist revolutionary (Horst Buchholz) who doesn't recognize that Coke is, as C.R. puts it, "a blessing of democracy."

While Scarlett's romance gives C.R. nothing but palpitations, it pleases his unhappy wife to no end, declaring that when word hits Atlanta it will "be the biggest thing in Georgia since Sherman threw that little barbecue." She's also wistful for the romantic spell bewitching Scarlett. When Scarlett asks her if she's "ever made love with a revolutionary," Phyllis replies, "No, but I nekked with a Stevenson Democrat."

Needless to say, C.R. is not nearly as pleased, promising to work Otto over "with a hammer and sickle." Soon, C.R. plots to get rid of Otto, employing Communist contacts on the east side of Berlin to help set Otto up. As you'd expect, things go awry, but boy do they go awry in a most entertaining manner. No Wilder film moves like One, Two, Three does with pacing that is downright remarkable.

On top of that, there are subtle messages about capitalism, communism and just about everything in between. When a jaded Otto realizes that one of his communist comrades is ready to leap to the west side of Berlin, he asks, "Is everyone in the world corrupt?" to which the defector replies, "I don't know everybody."

With One, Two Three, Wilder bottled a concoction with more fizz than any bottle of Coke. Really, it was Wilder's last truly great film, yet many people haven't seen it. They don't know what they're missing. One, Two Three is the real thing.

Comments:
I didn't realize that was Cagney's last picture before his hiatus. He was definitely clicking on all cylinders. This film reminds me a great deal of Wilder's mentor, Ernst Lubitsch - particularly Ninotchka. It's definitely one of my favorite Wilder films.

I love this movie too. It is so wonderfully fast, a cross between a 30's screwball comedy and a 60's satire. Both Cagney and Arlene Francis deserved Oscar nominations. She is absolutely hilarious, and has one of the best lines Wilder ever wrote. Cagney is so exhausting that I wanted to retire after watching him.

If he had been going to open a Pepsi plant, that would have been even better. Imagine Cagney having to answer to Joan Crawford...

I loved this movie so much that after I first saw it I turned right around and watched it 2 more times.

It's unfortunate that Cagney had so few opportunities to do full-out comedy in his career, something which can be attributed in part to the extent to which he was typecast as a tough guy(Yankee Doodle Dandy is a musical, of course, but the role of George M. Cohan was essentially a dramatic one). One, Two, Three shows that he could be devestatingly funny when given the chance.

Another big, big fan here. "One, Two, Three" is I guess Wilder's cult comedy. It's not on a lot of lists, but it seems like almost everyone who sees it has a kind of special connection to it. Cagney's performance during the last half of the movie belongs in some kind of comic Taj Mahal. And you guys are right about the underrated Arlene Francis -- known to some of us as that classy lady on "To Tell the Truth." (I, of course, was watching the show from the womb.)

One of the things I love about this one is the kind of layering of even throwaway jokes that Wilder uses. There's even a delicious tri-lingual pun around the German word "schmuck" (pronounced "schmook") which means jewel in German and, of course, something related to the term "family jewel" in Yiddish. Cagney's reactions as he briefly thinks he's being insulted but then quickly realizes that he's being presented with the engagement ring he requested is priceless.

And was there ever a more apt use of "The Sabre Dance"?