All aboard the Overland Stage 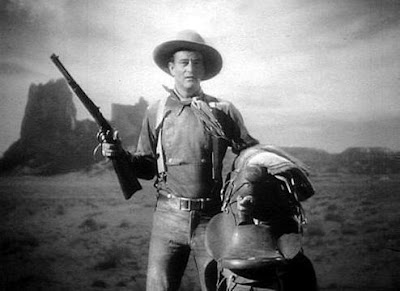 By Edward Copeland
Western lore had been around a long time in 1939, in dime novels and below-B grade movies and Gene Autry shorts. Then, 70 years ago today, John Ford's Stagecoach opened and it practically invented the genre from scratch (though that's a bit mythical as well since Destry Rides Again would gallop into theaters just mere months later) as well as introducing one of the biggest movie stars of all time. Given the iconic shot that Ford used to introduce the Ringo Kid, the director had to know that his film was giving birth to a star.

While Stagecoach remains a great film and a landmark in motion pictures, it was a somewhat odd experience re-watching it as it came as I continued my journey through the Deadwood box set that I received for Christmas meaning that, even subconsciously, I was ready for a different kind of Western. Every time one of the snobs turned their nose up at "fallen woman" Dallas (Claire Trevor), how I longed for Ringo to call someone a cocksucker.

Then again, when you get down to it, the Western never has been a simple type when you think about it. Stagecoach begins and ends in Western towns with the trail ride in between; Deadwood remained almost exclusively within a town, as did High Noon and Rio Bravo; Red River rode its story along a cattle drive; Fort Apache took its stand at a military outpost; The Wild Bunch went all over. All would be considered Westerns.

Still, Stagecoach unofficially created a certain form of template. There is one actual link between Ford's film and Deadwood. You can still admire its great b&w cinematography and early use of deep focus and that was the work of its d.p., Bert Glennon, whose son, the late James Glennon, was the director of photography for the bulk of the episodes of Deadwood. 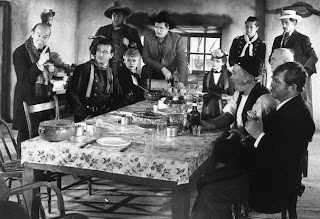 One thing that does set Stagecoach apart from most in its vast genre is that it's an ensemble piece. It may have launched John Wayne's career into high gear, but he wasn't the lead and neither was anyone else in the cast really and what an assortment it was. There was Andy Devine providing abundant comic relief as the stagecoach driver Buck. John Carradine as the gentleman gambler Hatfield who joins the ride to protect the lovely gentlewoman Lucy Mallory (Louise Platt) on the way to join her Cavalry husband. George Bancroft as Curly, the marshal who literally rides shotgun because of reports of attacks by Geronimo and Apache forces as well as to deliver the Ringo Kid to jail. Donald Meek (has there ever been a more appropriate last name for a character actor?) as the whiskey drummer Mr. Peacock. Then there is Berton Churchill as Gatewood, the banker who, at the thought of another lunch with his wife and her society of female do-gooders, decides to grant himself a bit of a bonus and skip town. It is funny how the women who drive Dallas out of town in the opening and try to regulate morality make the Margaret Hamilton character in My Little Chickadee even more of a pitch-perfect parody.

Finally, there is Thomas Mitchell as the boozehound Doc Boone, a performance for which Mitchell won the 1939 Oscar. Mitchell had one helluva year of performances from which to choose from too. In 1939, he also played Scarlett's father in Gone With the Wind, Jean 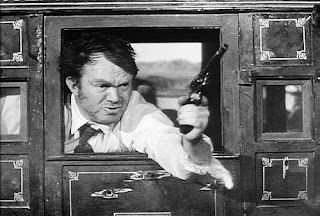 Arthur's fellow reporter in Mr. Smith Goes to Washington, Cary Grant's pal in Only Angels Have Wings and Clopin, king of the beggars in Charles Laughton's Hunchback of Notre Dame. Unlike this year with Kate Winslet, the Academy chose the proper Mitchell role as Doc Boone is a great one, never overplaying the drunkenness and then when the time comes, making the inner wisdom and strength convincing when he has to sober up and perform his medicinal duties. In fact, for some first-time viewers today, much of Stagecoach's plot will seem predictable and trite. You know the alcoholic doctor will overcome his weakness to come through when he's needed. You know the woman with her nose in the air will come to see that the fallen woman is just another human being. You know the marshal will be an old softie. However, it's important to remember that in 1939, all these cliches weren't the cliches they are now. Other parts of the film will seem oddly prescient, particularly those dealing with the banker Gatewood who says, "What's good for banks are good for America," complains about taxes and Washington wanting to install examiners to look over bank books. Then you remember that when they were filming this in 1938, it was still recovering from the last time that a lack of regulation allowed the nation's financiers to drive our economy into the ditch.

Finally though, this is Ford's show and he makes the most of it. In addition to the aforementioned photography and mythic introduction of the Ringo Kid, there are other iconic shots, most set in Monument Valley. Landmark camera work such as the whip pan from the stage riding through the valley to the Apaches perched on a hill. Finally, there is the amazing nine-minute chase sequence as the Apaches pursue the stage, punctuated with the remarkable stunt work of the legendary Yakima Canutt. Stagecoach may be 70 years old, but it's still sturdy enough to carry passengers today.