BLOGGER'S NOTE: This post is part of the Ambitious Failure Blog-a-Thon being coordinated by William Speruzzi at This Savage Art. 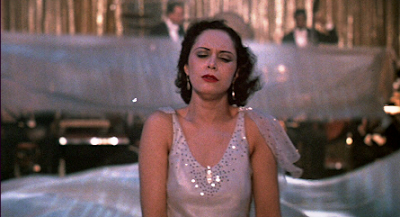 By Edward Copeland
Having not seen The Cotton Club in more than 20 years (and remembering it fondly), I suspected that it might fit the bill for an "ambitious failure." Boy, was I right. It's hard now to see how I gave this film a pass in the first place except that I was young and naive and may have been giving Francis Ford Coppola (who for some reason dropped the Ford for this film) way too much credit. 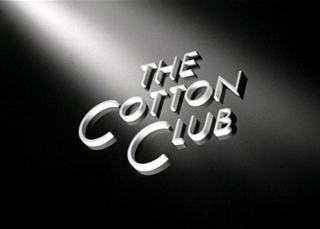 In a way, I can excuse my initial exuberance: The Cotton Club had a helluva pedigree: The Godfather team of Coppola and Mario Puzo and produced by Robert Evans, who was Paramount Pictures' production head at the time of The Godfather. It also was co-written by William Kennedy, fresh off his Pulitzer Prize for the novel Ironweed. Music, mobsters, what could go wrong? Looking at it again now, just about everything. Perhaps if it had been a novel, it might have made some sense with its multitude of characters and storylines but in a barely over two-hour running time, the film sadly lacks focus. It also hurts that while there are some good performances, the cast doesn't come close to the talent assembled for The Godfather films. The movie overflows with atmosphere and great technical details but sorely lacks momentum. It starts out well with a great looking credit sequence (which notes something I forgot, that Richard Gere did his own cornet solos) before convincingly placing the viewer in 1928 Harlem, where Gere's musician gets more than he bargained for when he saves the life of Jewish gangster kingpin Dutch Schultz (James Remar, still menacing but a few miles removed from his bad guy in 48 Hrs.). 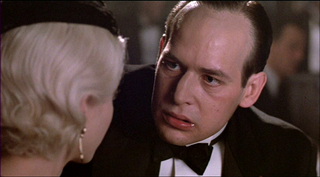 Rewatching it, it's interesting to compare the portrayals of Schultz and his numbers man Abbadaba Berman in this film and Billy Bathgate, the botched adaptation of E.L. Doctorow's good novel. I actually think Remar proves more interesting that Dustin Hoffman did in the later film but Allen Garfield's Berman here doesn't even seem like he's the same guy played so memorably by Steven Hill in the later movie. I digress: We're here to discuss the failures of The Cotton Club and there is no way around blaming it on its ambitions. 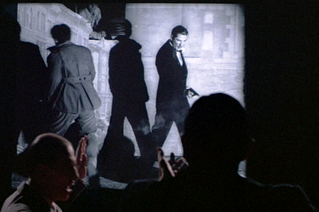 Here is a short laundry list that the film tries to encompass: racial discrimination where African Americans could perform in The Cotton Club, but not attend the shows; the waning influence of Jewish and Irish mobsters; tensions between Dutch's Jewish hoods trying to hone in on the action of African American crooks in Harlem; the approach of Lucky Luciano and Italian mobsters; light-skinned African Americans trying to pass for white; and the transition of silent films to sound. That's not even counting the tacked on plot strands of thwarted romance and brotherly conflict, among both Gere and Nicolas Cage as his aspiring hood brother and Gregory and Maurice Hines as a dancing team with different goals. That's a bit much for any movie to bear, especially without clocking in around four hours in length.

At times, Coppola does handle the transitions between his characters and story deftly, as in an early scene where we pass from Hines' storyline to Gere's simply by having the characters pass each other on the street. It doesn't help that the most interesting characters are the smallest ones while the leads come off as stiffs. There's a nice small role by Laurence Fishburne when he was still known as Larry who describes himself as a pimp, thief and gambler who only has two things to do: "One is to stay black and the other is to die." There's also interesting moments provided by Lisa Jane Persky as Dutch's angry wife, Gwen Verdon as Gere's former showgirl mom and Tom Waits as a manager at The Cotton Club. There's also the wonderfully droll performance of Julian Beck as Dutch's aging strongarm Sol, who is given to saying odd things such as when asked about his parents, saying he had no parents, "they found me in a garbage pail" and tossing nonsequiturs such as "I used to race rats as a kid." 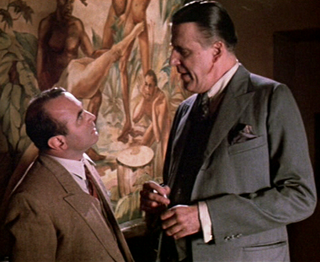 Still, two actors alone probably deserve the credit for me liking The Cotton Club as much as I did then and providing what I like best about it today: Bob Hoskins as Owney Madden, the Irish gangster who owns the Cotton Club, and Fred Gwynne as Frenchie, his right-hand man. As he usually was in those days, Hoskins is a real spark plug as Madden. When Dutch bursts out in an act of violence, he declares that someone "needs to cut out your brain and pickle it." When he acts as a mediator between Dutch and a rival gangster, he forces them to seal the deal by shoving their hands together and declaring "Shake fucking hands." Ultimately, it's his comic, touching relationship with Gwynne that remains the best thing about the movie. Frenchie advises Owney never to trust anyone with a nickname. When Owney points out that Frenchie is a nickname, Frenchie replies, "That's different — I'm trustworthy." When Cage, desperate for cash abducts Frenchie, Gere is forced to deliver the ransom and tries to convince Frenchie he's not involved with his brother's scheme. "I see what I see, I hear what I hear, then I make up my mind," Frenchie replies. When Frenchie mistakenly believes that Owney only offered $500 for his release when Madden really coughed up $50,000, their reunion ends up with Frenchie smashing Madden's pocket watch to smithereens, then pulling out a wrapped box containing a platinum replacement. Truly, Frenchie and Owney are the only love story in The Cotton Club that works.

Coppola does provide many nice set pieces, especially among the musical numbers such as Lonette McKee's rendition of "Ill Wind," the climax of all the stories in the train station and the nice followup to a scene of violence as blood drips onto Diane Lane's cheek before she realizes it's coming from the chandelier. However, he's also capable of creating some ridiculous scenes as well, such as when Gere and Lane start slapping each other as they dance and the people around them start aping the move, assuming it's a new dance. That worked well and with laughs years later, when Twin Peaks did a similar scene with a crazed Leland, but it seems completely out of place here. Also, some of his connections don't quite work. Gregory Hines' conflict with The Cotton Club's backstage enforcer (Ron Karabatsos) leads him to tell Fishburne that he's going to "kill him with his tap shoes" but when the sequence come that contrasts Hines' tap number with a death, it's not Karabatsos on the receiving end, but Remar, so it doesn't make sense. Overall, The Cotton Club had so much going for it, it's a shame that it didn't work out better. Hell, the making of the movie itself inspired a real-life murder among would-be movie producers. Even in real life, The Cotton Club proved to inspire failed ambitions.

Comments:
I agree about The Cotton Club, although it was overly praised at the time of release ... much to my confusion.

I had the privilege of having worked on the film as an extra character. With this having been my first movie experience, the expectation of it having been in the same caliber as "The Godfather", and being under the direction of Francis Ford Coppola, what more could I ask for! I have the movie on DVD and occasionally go back and still enjoy it even though it may have been over rated!