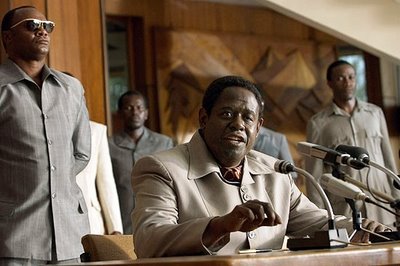 By Edward Copeland
OK, The Last King of Scotland doesn't include the much-told tale of Idi Amin serving up the head of an opponent during a dinner while he ruled Uganda, but I couldn't resist using that as the title of the review anyway. In the major critics' awards so far, Forest Whitaker has managed a nearly clean sweep of best actor prizes for his work as Amin and seeing the film, it's easy to see why.

If you are old enough to have seen footage of the real Idi Amin, Whitaker perfectly captures the bluster and charisma of this brutal tyrant who longs for good P.R. while dispatching his enemies in the most vicious fashion possible.

As a general rule, I find the vast number of movies about real-life African or African-American characters that are told through the eyes of some white guy (Think Kevin Kline in the Steven Biko story Cry Freedom) a bit disconcerting. However, here, where Amin is seen through the eyes of a Scottish doctor (James McAvoy), it seems necessary. You almost need an outsider to tell Amin's story because it would be difficult to focus a tale exclusively on him. As great as Whitaker is, a little Idi goes a long way, even if McAvoy's protagonist is a bit of a bland one.

Co-written by Peter Morgan, the same screenwriter who produced this year's gem The Queen, The Last King of Scotland is far from a perfect movie and director Kevin MacDonald lets it drag on a bit too much at times, but it's another case of something that seems to be more and more common: Films that are worth seeing for performances alone and Whitaker certainly provides one of those here.

Sure, some of the machinations of the plot are a bit much — it says it's based on real events but it's also based on a novel so who knows if the doctor really knocked up Amin's wife (Kerry Washington)? Still, Whitaker's turn provides such a powerful punch that it's easy to overlook The Last King of Scotland's flaws.