Altman at his loopiest 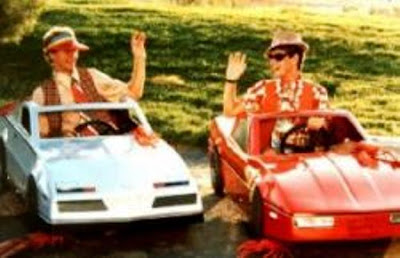 By Edward Copeland
Earlier this year, when the Academy announced that it would finally honor Robert Altman, albeit with an Honorary Oscar instead of a competitive one, I made a concerted effort to start catching up with those films of his I'd never seen and to revisit some of the ones that I had. That journey has brought me to the really odd comedy O.C. and Stiggs.

I'd first caught most of this eons ago on late-night cable, when it attracted my attention simply by the inclusion of the political candidate Hal Phillip Walker from Nashville — giving the face of Thomas Hal Phillips here and not just a voice. Watching the entire film, his presence seems like an inside joke because there isn't much to it, just as there isn't much to the film itself.

Imagine Altman trying to make one of those Savage Steve Holland teen comedies from the 1980s — and doing it badly — and you get the idea. In fact, on the DVD, Altman acknowledges that he really had little interest in making O.C. and Stiggs except as a satire of all those 1980s teen comedies which he admits to despising.

O.C. and Stiggs isn't awful, the way Beyond Therapy was, but it's just really weird. However, it does have some pluses — namely an early appearance by the wonderful Cynthia Nixon and one of its two leads is Daniel Jenkins, son of Ken Jenkins of Scrubs fame, both of whom would find their way into a much better Altman project — the first great HBO series, Tanner' 88.

For that alone, we should be glad that O.C. and Stiggs came to fruition, as odd an unsuccessful as it may be.