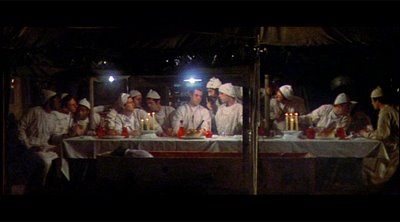 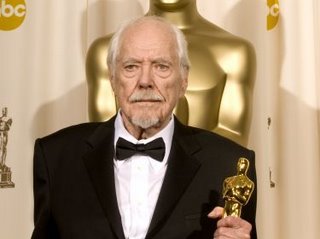 This is an appreciation that I hoped I would never have to write but one that I knew would come eventually. I’m grateful that the Academy gave him his due, albeit honorary, last year before it was too late because film lovers are unlikely to know a true original like Robert Altman ever again. His revelation about his heart transplant also made for one of the most touching moments on one of the Oscar telecasts in years.

I was fortunate enough to interview the great man in 1994 for a press junket for Ready to Wear, one of his least successful efforts but one which he repeated a line he often said about many of his films:

"I think it's a lot better film than anyone will discover until about a month after it's opened and played. I find that all of these films are like your children and you tend to love your least successful children the most, but they're finished and the cord's cut and it's out there and it ... doesn't belong to me anymore."


Now, Altman himself belongs to the ages as well.

When I wrote about A Prairie Home Companion earlier this year, I said how the film, though light in tone, seemed like a career summation of sorts for Altman. The Associated Press even reported that at the Minnesota premiere of the film earlier this year, Altman said, "This film is about death." Even though he had made plans for a fictional version of the documentary Hands on a Hard Body, I guess this has proved to be the case. 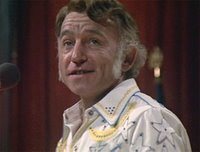 I’ve written so often on this site about Altman and many of his films, that I feel as if I’d be repeating myself if I went much into specifics here when you can readily access my thoughts in my indexes. I do think it’s worth remembering his contribution as the director of Tanner ’88, which really was the first great HBO series when he collaborated with Garry Trudeau on a fictional Democratic presidential candidate and got many real-life politicos to play along. It even earned him an Emmy. Sadly, its sequel, Tanner on Tanner, didn’t reach the same heights. I’ve never talked about some of his other works such as The Long Goodbye, Secret Honor and California Split. 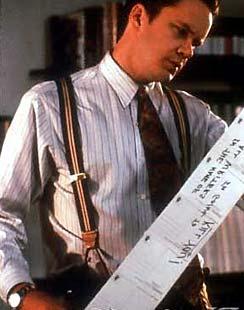 I think in many ways Altman stands alone among our greatest filmmakers in that for every masterpiece he produced, he also conjured up real clunkers like Quintet and Beyond Therapy, but I think it was more a symptom of his willingness to take chances more often that most working directors would ever dare. So many moments from so many films rush through my mind. Barbara Harris finally getting her shot in the spotlight in the most tragic of circumstances in Nashville. The hilarious reveal that Tim Robbins is a cop in Short Cuts. Elliott Gould feeding his cat as Philip Marlowe in The Long Goodbye. Warren Beatty slowly, ultimately fruitlessly, fleeing gunmen in the snow of McCabe & Mrs. Miller. The long closing in on the diner at the opening of A Prairie Home Companion accompanied by Kevin Kline's hilarious voiceover.

I’ve mentioned it before but in that same 1994 interview, Altman said that he always felt that most movies, especially his own, improved on a second viewing because the viewer could relax and stop worrying about the plot and just let the movie unfold. Now that Altman’s entire career is before us, it’s a good time for those of us who loved him and those unfamiliar with much of his work to take the opportunity with the prolific body of work he’s left us. This doesn't even take into account all the films he produced for others, especially Alan Rudolph, such as Afterglow and Mrs. Parker and the Vicious Circle, or films I didn't even realize he produced such as Rich Kids and The Late Show.

The online tributes should be plentiful so I'll include some as I learn of them. Also, please leave some thoughts here as well and join in the communal mourning. Dennis Cozzalio at Sergio Leone and the Infield Fly Rule has a superb remembrance up. Keith Uhlich has one as well at The House Next Door. John Maguire at Confessions of a Film Critic also joins in the mourning. David Hudson at GreenCine Daily is compiling a multitude of salutes. For links to my writings on Altman and some of his films:
Beyond Therapy
Brewster McCloud
Buffalo Bill and the Indians or Sitting Bull's History Lesson
Fool for Love
interview (1994)
MASH
McCabe & Mrs. Miller
Nashville
O.C. and Stiggs
A Perfect Couple
The Player
A Prairie Home Companion
quick takes
Quintet
Ready to Wear
Short Cuts
Tanner '88
A Wedding

Comments:
Edward: Thanks for being one of the first to let me know about this sad event. As Brian said on my site, sometimes it's hard to get too worked up over the death of a man who has lived such a long life and done so much. But I don't think Altman was finished, and his work was as vital in 2006 as it ever had been. There were tears shed this morning. Thanks for a lovely tribute.

This is the first I've heard of Altman's death and, yes he's lived a long life and many years have passed since his last really great film, but this is still horribly depressing. I've never worshipped him in the way that so many others have, but I have admired him enough to go out of my way to track down as many of his films as I possibly could.

Not that long ago I came across Thieves Like Us, which I'd never heard of previously and which may very well be his best film. If somehow you've managed to miss out on that one, please go and hunt it down straight away. It's as evocative a depiction of the Depression era as just about any other.

It's a story as old as the hills - The Hollywood Hills, to be exact. An enterprising young filmmaker from the fringes bursts upon the scene with edgy, challenging work that resonates with critics and audiences, expanding the boundaries of what cinema is capable of. Flush with success, and tempted by the lure of big paychecks, the artist is gradually, or sometimes precipitously, integrated into the world of mainstream commercial filmmaking, and forfeits his or her renegade status to become part of the establishment. The work inevitably becomes less challenging, crassly engineered to maximize profit, or worse still, created specifically and for no greater purpose than to win Academy Awards. Hollywood is a competetive town, ruled by status and the desire for recognition, and it's not uncommon for a talented artist to allow the questing for little golden goodies to not only override their better instincts, but to determine their very choices and reshape the arc of their careers. Most of Robert Altman's contemporaries - Spielberg, Coppola, Scorcese and Bogdanovich, to name a few - have been guilty of this to varying degrees. You can call it what you will - career development, mainstreaming, Oscar-baiting - but what it basically amounts to is selling out.

Robert Altman could have won an Academy Award if he'd wanted to. He could have made big-budget special effects pictures, "important" historical epics, or fluffy escapist comedies. He could have condescended to his audiences and deferred to the judgement of his betters ("Get rid of the overlapping dialogue and you'll add 20 million to the gross"). He could have dumbed it down, gone for the gold (box office and Oscar), and watched his bank account grow. Following M*A*S*H, he basically could have written his own ticket. He could have, but he instead chose to tell stories he felt passionately about, and tell them the way they ought to be told. Even his bad films stand as proof of his personal courage and conviction - can you imagine anyone else even attempting something like Images or Quintet? He is the only major modern American filmmaker I can think of - excepting John Sayles, who learned from his example, and arguably Woody Allen, although my feeling is that he's now motivated more by profits than by passion - who never sold out in any way, shape or form.

It's hard to think of another filmmaker of the last 30-odd years who's work has been more challenging or provocative. M*A*S*H, made at the height of Vietnam, depicts the insanity and absurdity of warface in a way few other films have ever dared before or since. McCabe & Mrs. Miller casts a wary eye on the encroachment of civilazation, viewing it as a corruptive influence - in its own way, providing a metaphor for the culture of corporate conglomeration stamping out the enterprise and initiative of the individual. Three Women is an surrealist discourse on the nature of identity that prompts many questions without offering any easy answers. Short Cuts examines the effects of moral rot in the polis - when divine retribution comes, in the form of an earthquake, it's the innocent (a child, a rape victim, a bicyclist, a sucidal depressive) who die and the guilty who are spared.

Nashville is a direct assault on the American culture of commercialism - it's no accident that the opening title sequence takes the form of an actual commercial, a illustrated sales pitch loudly hawking the film and its cast. Everyone in Nashville is selling a bill of goods - politicians blast their campaign promises from trucks with loudspeakers, singers push themselves, their scrupulously groomed images and their music, a woman even sells her body at a political smoker as a means of getting ahead. Hell, when Keith Carradine sings "I'm Easy", even that's a sales pitch - aimed right at Lily Tomlin, the woman he aims to screw. Commercialism - the way the public is manipulated, or the way people allow themselves to be the object of such manipulation -has never been probed to such startling, disquieting effect. The performers don't know much about the candidate they're stumping for, but it's a case of one hand washing the other - power and votes in exchange for visibility and money. Pathetic Barbara Jean, sold to the public as a backwoods sweetheart singing homespun ditties about her simple Idaho home (this from a woman with her own private jet), has become so lost and confused by years of being packaged as a commercial commodity that it's led to crisis of identity which has eroded her sanity. She's the only one in the film not acting from greedy, grasping self-interest - she really believes in what she's singing, or at least she wants to. When she has a breakdown in front of audience telling rambling anecdotes from her kinder, simpler childhood, it feels like a last ditch search-and-recovery effort. She's been used to sell records, candidates, the image Nashville wants to create for itself - and she becomes the film's scarficial lamb, the target of confused, hurt fan who knows he's been spoofed years of premeditated packaging in lieu of something real and knows he's been manipulated.

I could go on and on and on - but I've used up enough space, and really, no amount of space is really adequate when discussing the life and legacy of Robert Altman. He stuck to his guns, and global cinema is infinitely richer as a result.

Impressive tribute, Edward. I can't claim to be Altman's biggest fan, but he still made plenty of great movies and there's no denying that he was a giant. The zoom lens will never be the same.