You have to have faith for this to work on you

BLOGGER'S NOTE: This appreciation of the 1985 film Fright Night was originally part of the October 30, 2006 Vampire Blog-a-Thon coordinated by Nathaniel R. at The Film Experience. 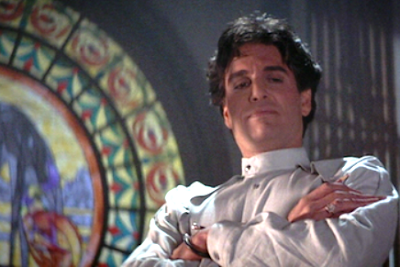 By Edward Copeland
NEW INTRO FOR AUG. 19, 2011: At theaters today (in 3-D no less), they will be opening yet another example of a needless remake of a film that was great to begin with, isn't that old (26 years) and didn't need to be done over except for the complete lack of originality in Hollywood. I'm sure the CG effects will be impressive and some of the performances (particularly Colin Farrell, though I bet Chris Sarandon still will be preferable) might be good, but there's no way that an actor younger than I am such as David Tennant can 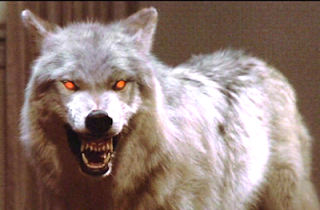 bring the same background and depth to the Peter Vincent character that Roddy McDowall did (I take it this Peter Vincent isn't a retired actor of Grade B horror films from the past who introduces those movies on late night TV). Needless to say, I will not be seeing the remake because I stick by my principle: If the original was great, it's a bad bet to see the remake. Sure, there have been notable exceptions. The winning Front Page of 1931 turned into the even greater His Girl Friday of 1940, but the two subsequent remakes, 1973's The Front Page and especially 1988's Switching Channels, missed the mark or just plain stunk. Here Comes Mr. Jordan proved winning and its 1978 remake Heaven Can Wait equaled it (and surpassed it in many areas. The third try, Chris Rock in Down to Earth, should have stayed buried. The remakes that really work are the ones where the originals left lots of room for improvement such as Ocean's 11 and True Grit and Steven Soderbergh and the Coens did just that when they remade them, though the Coens also have a bad remake on their resume when they tried to redo Alexander Mackendrick's The Ladykillers starring Alec Guinness. So, in my pointless protest, I'm re-running the tribute to the real Fright Night that I wrote in 2006. 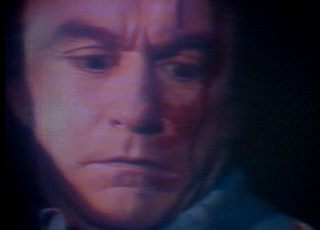 Sinking my teeth into today's vampire blog-a-thon, I thought I'd give long overdue appreciation to the best example of a cinematic tale of the undead from the mid-1980s. No, not Joel Schumacher's bore The Lost Boys. Not even Kathryn Bigelow's overpraised Near Dark. No, for my money the best vampire tale of the mid-1980s was Tom Holland's scary and funny Fright Night from 1985. Thanks in no small part to two great performances: Chris Sarandon as Jerry Dandridge, the vampire next door, and an Oscar-worthy turn by Roddy McDowall as a ham B-movie actor reduced to hosting horror flicks on local TV who finds himself fighting vampires. For real.

This is that era's vampire film that's worth inviting into your home. (I'm not joking about McDowall and Oscar either. Klaus Maria Brandauer in Out of Africa and William Hickey in Prizzi's Honor earned their supporting 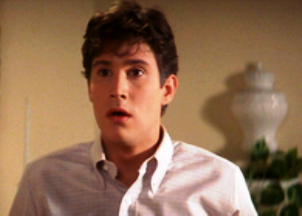 actor nominations, but McDowall deserved recognition over Don Ameche in Cocoon, Robert Loggia in Jagged Edge and Eric Roberts in Runaway Train.) As the notes in the Fright Night DVD indicate, the movie is a variation on "The Boy Who Cried Wolf" and the boy in this question is high school student Charley Brewster (William Ragsdale, before he vanished into the Fox sitcom world of Herman's Head). He's a huge fan of the horror movie TV show hosted by Peter Vincent (McDowall), has a girlfriend named Amy (Amanda Bearse, also in her pre-Fox sitcom days before Married…With Children) and a goofy friend named Evil Ed (Stephen Geoffreys, whose post-1980s credits, according to IMDb, consist mainly of hardcore porn). Charley also has a new neighbor moving in next door. 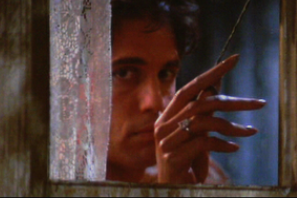 One night while fooling around with Amy in his bedroom, Charley notices the new neighbor, Jerry Dandridge, and his Renfield-esque handyman Billy (Jonathan Stark) carrying what appears to be a coffin into the house. Amy, who finally was ready to surrender her virginity to Charley, leaves the house in a huff. You would think that a horny teen about to get laid wouldn't have been paying attention to what's going on in the yard next door with a willing woman lying in wait, but all vampire films require some suspension of disbelief. What Charley saw convinces him to turn voyeur and while he misses his chance to see Amy nude, he happens to catch Jerry in the window of his house about to have a sexual tête-à-tête with a hot topless woman — something that reignites the libido he so easily abandoned earlier. Only in this case, the penetration that Charley almost witnesses isn't sexual — it's Jerry's fangs about to plunge into the young woman's neck. Unfortunately, Jerry spots Charley as well and quickly closes the shade before finishing his kill.

Needless to say, Charley's friends and his mom don't buy Charley's story — Amy even thinks that it may be a ploy to win her back into his good graces. Charley doesn't have better luck with the police either, who can't believe they fell for this kid's story about a murder when he's really claiming it's the work of a vampire. Jerry, however, knows what Charley saw and that he's a threat. Easily finagling an invitation into Charley's house from his man-hungry single mom, Jerry pops in for a visit — laying the groundwork for his plan to take care of Charley. When he arrives later that evening, whistling — "Strangers in the Night" no less — he insists to Charley that he doesn't want to kill him and he's going to give him something Jerry didn't have — a choice. Charley doesn't agree to stay mum and manages to escape Jerry's murderous intentions and decides to turn to Peter Vincent for help.

Charley catches the actor on a particularly bad day. He's just been fired from his TV job because his ratings have dropped. As he laments to Charley, kids don't want to watch vampire killers anymore. They prefer 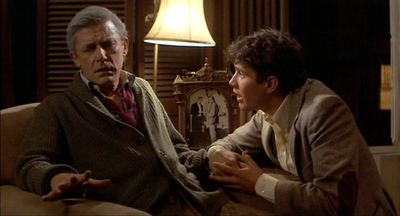 "watching demented men in ski masks hacking up young virgins." Vincent feels sorry for Charley, but he's also convinced that the kid needs psychiatric help. When Ed and Amy discover Charley setting up his bedroom for defense and sharpening stakes for a planned assault on Jerry's house, they decide to give Peter Vincent another try, hoping he can talk sense into their friend. Vincent agrees to help prove to Charley that Jerry isn't a vampire — for a $500 savings bond. The actor and the three teens visit Jerry with the intention of faking a vampire test so that Charley will back off — only something happens that manages to convince Peter that perhaps Charley is telling the truth. 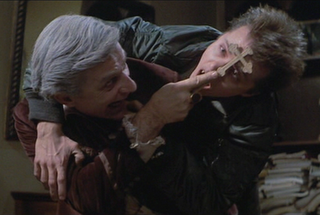 Peter — a coward at heart — hastily makes plans to leave town, but not before Jerry has abducted Amy, who bears a startling resemblance to a past love, and turned Evil Ed into a vampire, who stops by Vincent's for a visit. Later, Charley shows up and convinces Peter that they are Amy's only hope and it leads to the nearly 30-minute climax that takes place almost exclusively inside Dandridge's house as Charley and the ham actor prepare to battle the undead. What makes Fright Night such a hoot to this day, on top of the great performances, is the deft blending of humor and suspense that Holland manages to build in his story. Peter's lament about what kind of horror movies kids want to watch in the 1980s seems a direct criticism of the endless Friday the 13th installments and similar films that seemed to be Hollywood's main attempts at horror in the 1980s. Those dreadful wastes of celluloid about Jason helped to make Fright Night such a refreshing change of pace.

What also set Fright Night apart from other mid-1980s horror efforts is that it didn't look cheap. It had an estimated budget of merely $9 million, but it looks as if it was much larger with sharp visuals, effects and sets. It also has a great techno score by Brad Fiedel aided by some typical 1980s technopop-type songs that certainly date the film but don't in any way diminish from the film's fun. 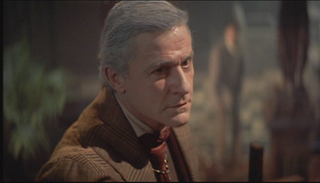 The film also manages to revitalize many cliches, from a fallen hero's redemption (in the case of Peter Vincent) to brief asides to teen sex comedies and truly modernizing the role of the charismatic vampire through Sarandon's witty and wicked performance. While Ragsdale, Bearse and Geoffreys are serviceable, Fright Night wouldn't work at all if it weren't for Sarandon and McDowall, two old pros who could have phoned it in for a paycheck but who raise the film to the level of a true, if underappreciated, classic of the horror and vampire genres. 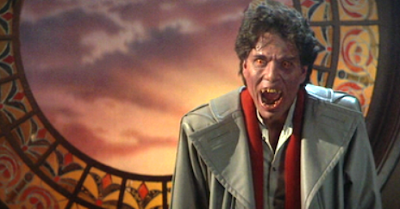 The one question I sought to answer when I decided to select Fright Night for today's vampire blog-a-thon (and still have no answer for years later) was what happened to Tom Holland. He later wrote and directed the original Child's Play, another film that blended horror and humor, though not nearly as well as Fright Night. Since then, most of his credits on IMDb consist of writing and directing many of the TV adaptations of Stephen King works. As a sidenote: He had nothing to do with the sequel, Fright Night Part II, which should be avoided at all costs.

Comments:
Excellent post about a great 80s movie! I wrote a little about Fright Night in my Blog-a-Thon entry today as well, but I didn't cover it in depth as you have.

I can distinctly - with chills - remember hearing the line in the movie that you've used as your title, and how it turned a rather tired vampire cliche onto its ear at a rather crucial plot moment.

It's a great movie moment that I'll always remember - completely unexpected and terrifying!

I saw this in high school and forgot all about it; it's past due for a revisit.

Ok, I really need to get this. If I'd see then as recently as 'Vamp' I would've blogged about this too.

Bwa-hahaha!! You know this is one of my favorite movies of all time for exactly all the reasons you said!

Okay. Thank you. "Fright Night" is one of the most under-rated horror films. It succeeds because it takes teen angst and twists it until it screams.

One precious moment in the film? How do you really hurt a teenage boy where he lives if you're a vampire? You beat the crap out of his car.