"I didn't know one man could bleed that much"

BLOGGER'S NOTE: We're a little late to the fest here, but Wagstaff has produced a great piece on Attack for the Robert Aldrich blog-a-thon being coordinated over at Sergio Leone and the Infield Fly Rule.

THIS IS A STORY OF MEN AT WAR… THE STORY EVERY SOLDIER KNEW, BUT NONE WOULD DARE TELL… THIS IS YOU’VE NEVER SMELLED IT… TASTED IT… SEEN IT BEFORE…

THIS IS THE RAW, NAKED FACE OF … WHERE NOT EVERYONE IS A HERO… AND NOT EVERY GUN IS POINTED AT THE ENEMY!

THIS IS WAR STRIPPED OF EVERYTHING BUT THE TRUTH! THE WAR STORY SO HOT NO ONE DARED FILM IT TILL NOW! 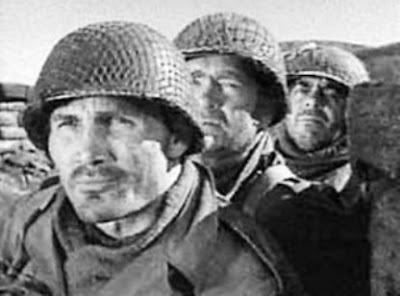 By Wagstaff
All caps aside, the preceding sales pitch that runs over the trailer for Attack! (1956) is remarkably accurate. Producer-director Robert Aldrich took Norman Brooks’ play Fragile Fox about men functioning (and not functioning) under the stress of war, and ventilated the drama with mortar shells and machine gun fire. In doing so, Aldrich turned this surprisingly frank and straight-forward war story into one of the best combat films of the 1950s.

The setting is the battle-torn Europe of 1944. Fox Company is having serious morale problems due to the incompetent leadership of Capt. Erskine Cooney (Eddie Albert). The captain’s fecklessness and ostrich-like dereliction of duty got several of his men killed during their last action, and has cost him the respect of his company.

It also has made him the target of the everlasting mistrust and vengeful wrath of one Lt. Joe Costa (Jack Palance). Lt. Costa’s pal, Lt. Woodruff, played by William Smithers, hatches a plan to convince the Battalion Commander, Lt. Col. Clyde Bartlett (Lee Marvin), to kick the captain upstairs with a promotion in order to get him out of the way. Lt. Costa, however, doesn’t see the efficacy of any of this; the political maneuvering of the officer class has increased his cynicism to the point where he only cares about the safety of his own men. Lt. Woodruff tries to convince the colonel anyway, over poker and a bottle of Kentucky bourbon, but fails. Lt. Col. Bartlett is a battle-hardened and competent soldier that harbors no illusions about Capt. Cooney’s character, but they both hail from the same small town; and Bartlett plans to use Cooney’s father’s political connections to run for office once the war is over. He tells the disappointed Woodruff not to worry, though; the scuttlebutt from on high says it’s a hundred-to-one that the company will see any more action. They’re out of the shooting for the rest of the war.

Lt. Costa doesn’t find any comfort in the hundred-to-one odds, and of course he’s right; that very day the company is ordered to take a town as part of a broader offensive. Capt. Cooney’s piss-poor plan is for Costa’s platoon to traverse 400 yards of open, vulnerable ground to test the enemy’s strength, and then to take refuge in an old farm house if things get hairy. If the operation does get ugly, he promises on his word to come in with reinforcements. Lt. Costa isn’t fooled by any of this, and promises to come back and kill Cooney if he goes back on his word. “I’ll shove this grenade down your throat and pull the pin.”

Things do go wrong and get plenty ugly. The town is heavily occupied by Germans, with mechanized support and Panzer tanks. Only five men from Costa’s platoon make it to the farmhouse. Lt. Costa’s desperate radio calls for reinforcements are ignored by Capt. Cooney, as he drowns his despicable inaction in a bottle of bourbon with deadly consequences. Lt. Costa’s men are surrounded — trapped; and I will stop here to keep from spoiling the rest of the movie. 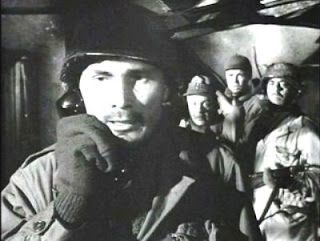 Jack Palance’s performance in Attack! is a revelation. What kid scared out of his wits by Palance’s portrait of an evil killer in Shane would ever guess that the actor could show the kind of tenderness and anguished vulnerability that he does here. Outside, Jack Palance looks like the perfect dogface grunt — his face and large presence look like they were carved from a block of granite by blasting it with dynamite — but inside, a sensitive soul that the heart aches for shines through. When Jack Palance hobbles down a stairway, his arm badly mangled after being partially run over by a tank, and seeks his revenge on Capt. Cooney; his demeanor is positively ghostlike. The scene reminded me of a Creepshow-style tale of morality, comeuppance, and revenge. His acting is great even after his character’s demise; if they ever gave out Academy Awards for the best performance as a corpse, then Jack Palance would have won hands down in 1956.

Eddie Albert also is good in a way we’ve seldom seen him. His Capt. Cooney is a man eaten away by the consciousness of his own inadequacies and cowardice. He’s crippled by the fact that he never became the man his father wanted him to be. Imagine Maj. Frank Burns from the TV show M*A*S*H, subtract the humor and put him in a situation that makes him 20 times more dangerous to those around him, and you’ll get the idea of his characterization.

Lee Marvin is great as always. What couldn’t this actor do with the utmost naturalness? The movie’s trailer describes Lt. Col. Bartlett as “a cigar-chomping brass hat, who played war like he played poker: hard and dirty” and I can’t improve upon that description.

Robert Aldrich directs the combat scenes in a ways that are easy to follow. The soldier’s objectives are easy to grasp so that we can keep our bearings after the chaos of battle begins. Between the action scenes, he never soft-pedals the philosophical implications of the dramatic situations. During the climactic final act, there is a bewildering array of ethical conundrums, and nothing is black or white; yet the moral and philosophical conflicts remain clear. We witness how the agreed upon reality of what happens in combat goes through three or four drafts and revisions before it even leaves the principle players involved, and after that, once it leaves and goes out into the broader world… who knows? Attack ends on a righteous note of idealism and defiance, when Lt. Woodruff decides to tell the truth about what happened, against his own best interests, but I doubt the viewer carries this note away. After all we’ve seen preceding it — the twisting and turning of the officially sanctioned narrative of what transpired as reality, and the many conflicting agendas that are served by it — the whole riddle of perceived reality feels like it could go on ad infinitum.

Comments:
Wagstaff, once again, a terrific piece. Attack! has been on my shelf for a long time now and it's going in the DVD player tonight. You write of Aldrich:

"Between the action scenes, he never soft-pedals the philosophical implications of the dramatic situations. During the climactic final act, there is a bewildering array of ethical conundrums, and nothing is black or white; yet the moral and philosophical conflicts remain clear."

This is a quality that I think is consistent throughout his films, even, to a certain degree, in his biggest commercial hit, The Longest Yard. And it's certainly a quality that is central to his status as a great American film director. I only hope that his status as such gets to be a little less under-the-radar than it is today, and I'd like to think that we all made a little step toward that for him with articles like these.

Thanks again for taking part. And though I never got a chance to comment underneath the piece itself, I absolutely loved your appreciation of The Old Dark House. I've already linked to it once, and I may do so again next week! Great work!

The Self-styled siren recently made me be interested in "Attack" and, after reading your review, I'm definitely interested in seeing it. If only to see Palance in that role (My image so far is a bit biased from some of his "Spaguetti-western" type of roles).

No Netflix in my distant shores, but I will keep an eye on it being on TV or released in DVD around here.

A great little gem I found in the library. I carped a bit over the lame tanks Aldrich used, but I read the US Army vetoed the script so he was uanble to use real units or even footage. Palance and Albert definitely hammed out their parts but that made it more interesting/