Holds that aren't easy to escape 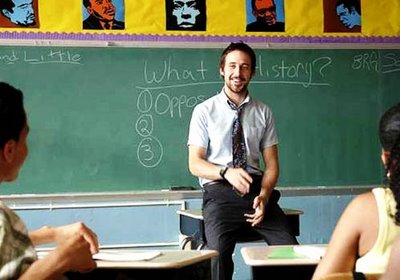 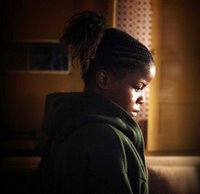 By Edward Copeland
Dan Dunne tells his Brooklyn junior high history class that history is the study of change, of turning points, of the clash of opposing forces, much like the ones that make him a good educator while he secretly nurses a drug habit. Ryan Gosling's performance as Dan provides the bulk of the energy for Half Nelson, but neither the film nor his performance would be as strong if it weren't for young Shareeka Epps as Drey, one of Dan's students who discovers his secret and develops an odd friendship with the educator. Their relationship, both as characters and actors, provide the best selling point for this small indie, which would seem slight and incomplete without them.

Directed by Ryan Fleck, who co-wrote the film with Anna Boden, Half Nelson in many ways reminded me of HBO's great series The Wire this season. Imagine Prez (Jim True-Frost) as a drug addict and the similarities are apparent. In fact, two of the young actors on The Wire this year, Tristan Wilds and Nathan Corbett (Michael and Donut to Wire fans), play students in Half Nelson as well.

Unfortunately, as a film, Half Nelson isn't nearly as strong as its acting or its ideas. While Gosling is great as Dan, the film doesn't give you a sense of what personal demons drove him to his addiction and a brief sequence involving a visit with his family does little to fill in the blanks.

Drey, on the other hand, does get the development that Dan lacks. The adolescent girl is a tough customer, with an older brother in jail and the drug dealer who helped put him there (played well by Anthony Mackie) offering her friendship, hoping to use her as a drug runner.

One of the best scenes in Half Nelson comes when the two men confront each other, the drug-addicted teacher and the drug dealer trading accusations of "inappropriate" relationships with Drey.

While the solid acting holds your attention, the film doesn't offer any sense that it has a destination in mind and, for me, the film just seems to stop.

The movie, in a way, resembles the wrestling hold it lifts for its title: It grabs part of the viewer but fails to get both hands firmly around the moviegoer's neck.

Comments:
i appreciated your review...i just recently watched this film and wanted to see if i was missing anything.

i picked up on much of the social, political, and most importantly philisophical ideas in the film but the pacing was just so slow that the screenplay left me wanting more, and there was plenty of ways to fit it in.