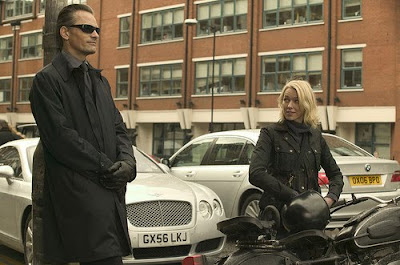 By Edward Copeland
David Cronenberg's latest film Eastern Promises presents a bit of a conundrum for me. I really liked it for the most part and it contains superb performances, especially from Viggo Mortensen and Armin Mueller-Stahl, yet somehow, it keeps you from completely embracing it. It's a film I enjoyed, if that's the right word, yet somehow it left me feeling empty and I'm not sure I'd rush out to see it again anytime soon because it seems to lack layers that deserved to be plumbed further.

The film takes place in a section of London dominated by exiled Russians, many of whom have transferred their criminal enterprises to England after having been chased out of their homeland years ago under Communist rule.

Mortensen stars as Nikolai, a driver for a prominent mob family who run their operations beneath the cover of a high-scale Russian restaurant. Nikolai mainly works for Kirill (Vincent Cassel), the ne'er do well scion of the family's boss Semyon (Mueller-Stahl).

Mueller-Stahl is a great character actor whom I forget about far too often for his consistently fine work until I see a performance like this. He perfectly knits a kindly yet sinister aura around Semyon and employs many nice touches, such as a scene where the mere click-click-click of his tongue proves ominous.

The essential story concerns a young Russian girl who dies while giving birth, prompting a hospital midwife (Naomi Watts) to try to find her family by translating her diary. Watts' character is half-Russian, with a British mom (Sinead Cusack), a late Russian father and a feisty and racist Russian uncle (Jerzy Skolimowski) who believes the dead deserve their secrets.

Watts is fine, but her character is very underdeveloped. There is a thread mentioned of a lost child of her own, but it, much like her entire character, seems more like a plot device than a person. However, the male actors such as Skolimowski and Cassel really get to shine.

Still, the star is Mortensen and this may be his finest performance, even if the film itself doesn't equal his collaboration with Cronenberg on A History of Violence. This is Cronenberg's second film in a row that downplays the gore a bit as well as his obsession with female genitalia, both real and symbolic. Now, Mortensen does get the well-publicized fight scene where he's fully nude, but this definitely is Cronenberg on slow simmer.

In fact, that's part of the problem with Eastern Promises. Nikolai is icy cool and it seems very appropriate, but the entire film seems to be set at the temperature of a Siberian gulag, depriving the audience of some expected payoffs. In fact, at times Eastern Promises veers perilously close to parody, but it never crosses the line. (I do have to admit though that the first shot of Watts riding her motorcycle in black reminded me of the introduction of Steve Martin in Little Shop of Horrors.)

In the end, I'm not sure where to come down on Eastern Promises. It was worth watching, if only for the performances and some of Cronenberg's touches, but the icy chill it cast on me left me as ambiguous about its worth as its ending.

Comments:
Naomi Watts on her bike also made me think of Little Shop of Horrors. I expected her to start singing "When I was younger, just a bad little kid..."

I liked this more than A History of Violence, which I found enjoyable, well acted and overrated. This has something AHOV didn't have, and you point it out. It's more ruthless and less apologetic. Giving someone a gun in a Cronenberg movie wastes the director's affinity for intimately close destruction of the human body. You have to get personal with someone to shiv them, which is what makes the butt naked Viggo fight so cringe-inducing. It has nothing to do with nudity. People keep pointing out that the nudity is the uncomfortable aspect of the scene, but that's ridiculous. This isn't even the first full frontal fight scene in movies, but it is the most violent one. The throat slashings and knife play here are more brutal than anything in AHOV, and I think AHOV really cops out at the end with its bullshit dinner table scene.

I liked this one a lot more.

i have no problem w/your saying watts's character was not developed. but to say her uncle's was more developed is silly. all we know is the b.s. about the kgb. david even holds back on viggo's background more than watts's for obvious reasons. the script was tight at 1hr40min so he wished to have as little background as possible. undoubtedly watts was the 2d lead, then cassel. w/o watts's character, it is merely an exercise in violence. she is our
conduit. she is the protagonist who drives the action of the film until viggo takes over. & she is brilliant because she is able to hold back & let viggo go--as penn did for watts in 21g, & del toro did in the 2d half of that film. or as all characters did in mulholland dr. few viewers appreciate subtlety. i always go a 2d time, or more, to see what i missed the first in her expressions. this is film, afterall, where as more is displayed by those expressions than words. & no one is better than she at that--from md & 21g to king kong & painted veil.