From the Vault: Crumb 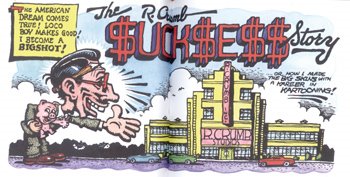 Year after year, like clockwork, the annual announcement of the Oscar nominations brings the expected ritual of bellyaching about omissions. In the past decade, critics directed their most consistent shouts at the documentary branch which repeatedly overlooked films they'd actually seen and praised but didn't make the nomination cut. In the 1994 contest, most of the whining commenced on behalf of the impressive sports documentary Hoop Dreams, but there was a better documentary that similarly got the shaft: Crumb, which takes a look at the family and life of underground comic artist Robert Crumb, creator of Fritz the Cat and the "Keep on Truckin'" guy of the late 1960s and early 1970s. Crumb's revenge on the Academy may take the form of box office as it now has received wide theatrical release this year. Gaining an audience for this remarkable film is a much greater reward.

It's also indicative of how, as Hollywood's formula machine churns out more predictable, escapist fare, it has almost become the exclusive responsibility of documentarians to produce real-life stories with the ability to surprise. 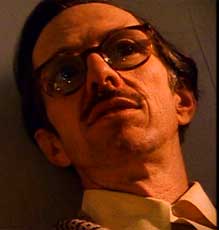 David Lynch is one of the producers of Crumb, produced and directed by Terry Zwigoff, and it's easy to see the appeal of this subject matter to that unique filmmaker. The documentary doesn't just plunge into the sometimes racist and nearly always misogynistic work of the eccentric Crumb, but it also focuses on the environment that produced such a mind and shows us his brothers, also artistically inclined but lacking R.'s knack for turning his dysfunction into a career. What makes Crumb so fascinating is that it's more than just a portrait of the artist as a sick man, it's a look at family as well as the pomposity of so-called experts who pontificate about the meaning, both good and ill, in Crumb's work while Crumb stands next to them, shrugging, smiling and arching his eyebrows in humorous exasperation.

The opening shot perfectly illustrates what lies ahead as Crumb sits, rocking on the floor of his house listening to music, one of the few times, he later explains, that he feels any love for humanity. When you first hear R. Crumb's voice, it almost resembles Dustin Hoffman as Rain Man, but R. exhibits more savant than autistic.

The film chronicles Crumb's life and career as the artist and his second wife, Aline, pack up their Winters, Calif., home to move to France, which Crumb describes as "slightly less evil" than the United States, though he insists that's not why he's leaving. It's his disgust with advertising and a lack of intellectual curiosity on the part of Americans.

During the course of the film, Crumb returns to his mother's home where his older brother, Charles, dependent on antidepressants to combat suicidal tendencies, still resides with their mother. Even in Charles' chemically altered state, the hero worship that R. holds for his older brother still shows.

R. Crumb escaped the house, made a name for himself, married and had children, but he's still clearly envious of his troubled brother, something which Charles attributes to Crumb being "so detached from humanity."

What impresses most about Zwigoff's film is that even if you go into it knowing next to nothing about R. Crumb, as I did, you leave feeling you are intimate with the man and all aspects of his life. While his work easily riles a lot of people, the film clearly shows why he's worth studying and, more impressively, raises the idea that art doesn't always come from the purest of intentions.

Comments:
I've meaning to come over here and comment on this for the past two days.

Great piece on probably my favorite doc ever made (granted, I'm hardly an authority on the genre). This is one to treasure; something I've watch over and over and never tire of.

The thing about the Bugs Bunny cartoon that turned Crumb on as a kid, his observation about power lines and how they can't be drawn from memory because they're so insidious we don't even notice them sprouting up around us, his assertion that we live in a culture where everyone wants the newest, hippest cool thing - and many, many more.