When the Levees Broke, Acts III and IV 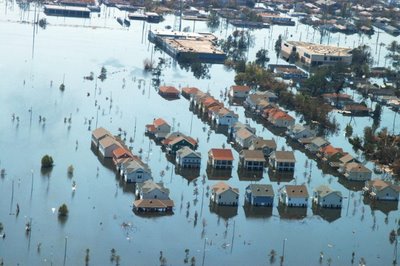 "We are destroyed. I've seen Beirut. I've seen Calcutta. I've seen downtown Jakarta. I've seen Aceh.
They have nothing on us."
Garland Robinette, radio host and resident of Uptown 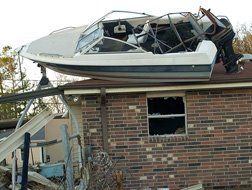 By Edward Copeland
Building on what he started in the first half of his documentary When the Levees Broke: A Requiem in Four Act, Spike Lee brings home the human and emotional toll in Acts III and IV. Some of the political bungling detailed in Acts I and II are still present — Dubya takes hits for failing to arrive on the scene of the disaster until weeks after it occurred and then sapping the already fragile electrical services to power his photo op. Still, most of the HBO documentary's second half concentrates on the devastation, both physical and human.

A doctor reports the startling rise in what can only be classified as post-traumatic stress disorder among the survivors. Louisiana's state medical examiner discusses the number of Katrina-related deaths that can't be classified as such because they weren't directly caused by the hurricane, ranging from suicides to suspended cancer treatments. The film also shows the families ripped apart, with rescues that would whisk moms to Utah while their children went to Texas. Some New Orleans residents remain determined to return while others have no intention of heading back to a city that was fairly dysfunctional even before the storm. If Lee makes a misstep in the documentary, it is the inclusion of a brief segment about the cultural traditions of New Orleans, wholly appropriate to the discussion, but which seems out of place stuck in the middle of Act III. It plays like an excuse to have Lee's frequent composer and New Orleans resident Terence Blanchard walk through the rubble playing his trumpet. It would have been better to have placed this sequence either early in the first half or perhaps at the beginning of Act IV, which shows this year's Mardi Gras celebration giving the city a badly needed boost of energy of hope.

Mardi Gras not only rejuvenated the dispirited residents, the footage of the festivities also provides viewers of the documentary a much-needed respite from the sadness and horror evoked by the tragedy. My favorite sight: a reveler wearing a T-shirt which reads, "FEMA EVACUATION PLAN: Run Motherfucker Run." Perhaps Mardi Gras is the best medicine.

"It was as if I'd walked through a time warp and I was in Europe following a bombing in World War II. Everything was gray. There was no green, no flowers, no birds, no dogs, no people, no children."
Louella Givens, an attorney and Lakeshore resident 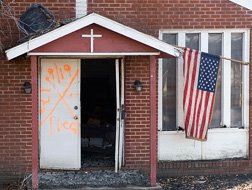 The relief offered by the Mardi Gras sequence doesn't last, preceding some of Lee's strongest emotional punches to the gut, detailing the true human toll of the incompetence and indifference of FEMA and the Army Corps of Engineers. The Corps, who built the poorly designed levees that led to the deluge that devastated the city, also was assigned the task of removing the piles of debris — only they didn't show up until four months after the hurricane hit. One lawyer suggested suing the Corps for causing the calamity, but found they are legally immune from lawsuits. He turned to suing the insurance industry that went out of its way not to pay off people's claims, a suit in which the insurers recently won a court victory. Other stories that break your heart are the tales of how crews responsible for marking houses as having been searched and finding no bodies did a half-assed job that ended up with people discovering the corpses of their loved ones as many as months later. On top of that tragedy, official identification of the dead was delayed by a lack of funding for the state ME's office to conduct DNA tests, funds he requested in September 2005 but didn't receive until December. As the first anniversary approaches next week, bodies still turn up, debris still stands and residents remain homeless, waiting for help that an Associated Press story released last night reports Louisiana state officials still haven't distributed. Spike Lee's masterwork reminds you of the anger and heartache many, even those not directly affected by Katrina, felt as they watched the events unfold on television. As one resident says, it wasn't just the levees that broke, so did people's spirits, but as the Mardi Gras celebration shows, healing can begin even under the worst of circumstances.

My favorite moment too.

The human spirit will bend but dammit it won't break.

I'm too angry right now for anything else.

We need to ask ourselves for at least another generation, "How did this happen?