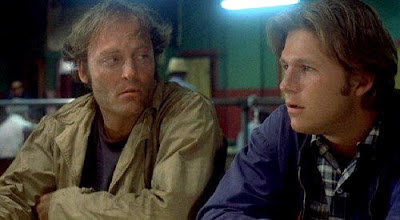 By Edward Copeland
Overhead shots swoop across the decaying urban landscape of 1970s Stockton, Calif., briefly passing a billboard noting that it is an "urban renewal district." The depressing cityscape sets the stage for John Huston's 1972 film Fat City. Huston would have turned 100 on Saturday, a fact I missed until I read it at That Little Round-Headed Boy, but as luck would have it the anniversary of his birth coincided with Fat City's passage from the GreenCine vaults to my mailbox. Promoted as a boxing film (and what I was expecting just from what little I knew about it), Fat City is more accurately a slice of underclass life, ricocheting its characters between desperation and hope and back again.

With a screenplay by Leonard Gardner, based on his novel, Fat City plays like a short story — it's not about plot, it's about observation. Stacy Keach stars as Tully, an aging low-rung boxing has-been with a tendency to drink too much, a failed marriage and a reliance on odd jobs, usually field work, to keep him from starving (or sobering up). His life changes, for good and ill, after encounters with two people: Ernie (a young Jeff Bridges), a promising young fighter, and Oma, a committed barfly (Oscar nominee Susan Tyrrell). He begins to mentor Ernie and to date Oma, an incredibly annoying creature that Tully tells his former manager Ruben (Nicholas Colasanto) will drive him out of his mind if she ever opens her mouth again. I can sympathize. Tyrrell's performance made me feel much the same way, but thankfully she's not on screen that much. 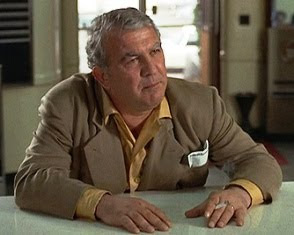 Speaking of Colasanto, I want to take some time saying what solid work he does here. I couldn't find any art of him in his Fat City role. Though Colasanto's billing is low, Ruben nearly has as much screentime as Tully (and probably more than Ernie) and it's time well spent. It's always slightly jarring to see an actor so identified with a single role (in this case Colasanto's great work as Coach Ernie Pantuso in the classic TV sitcom Cheers) in another context, but really, Ruben is the most finely drawn character in Fat City. Not that Huston ever was very grandiose, but his direction is in particularly lean, fighting shape in Fat City with many nice touches, especially in the final, lingering scene. The movie itself isn't one of his best, but as a portrait of people, place and time, it works fairly well. The performers, with the exception of Tyrrell, whom I found annoying, all are very naturalistic. It makes sense that her over-the-top characterization would be the one to earn an Oscar nomination since, as someone once observed, acting Oscars usually go to the person who acts the most, not the best. Keach's performance doesn't really resemble any other work I've seen from the actor (he's almost unrecognizable sans his usual mustache) and young Bridges shows a lot of the promise he displayed early in his career before turning into one of our finest, most underrated actors. However, I keep being drawn back to Colasanto's work here — it's not flashy, but it works and it's a far cry from Coach Ernie Pantuso.