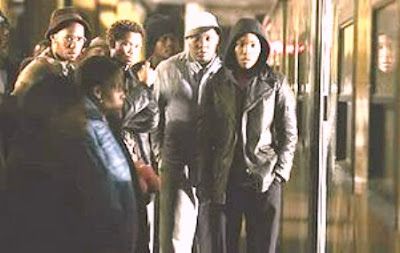 By Edward Copeland
Silence can sometimes speak volumes and that is certainly the case with Presley Chweneyagae's performance in the title role of Tsotsi, the South African film that won the Oscar for foreign language film in 2005 but didn't get a theatrical release until 2006 and is now available on DVD. I'm hard pressed to remember the last time I've seen a performance with this little dialogue that proves to be this powerful.

In many respects, Tsotsi, written and directed by Gavin Hood and based on acclaimed South African playwright Athol Fugard's sole novel, carries many familiar elements, yet they still manage to seem fresh through the different locale and emotional underpinnings.

In the DVD commentary, Hood actually says that he storyboards not for camera shots but for emotional beats and that certainly shows here. Tsotsi, which translates loosely to thug, is a young gangster from a South African shantytown whose life is transformed when during a carjacking he unwittingly takes a 3-month-old child with him and finds his humanity bubble to the surface over his concern for this child.

It seems that many movies, especially non-American ones, return again and again to the story of adults whose lives are changed through interaction with children, but Tsotsi doesn't overplay the sentimentality or let the audience off with easy answers. In fact, the DVD contains two alternate endings that would have brought the film to a more concrete resolution, but Hood opted for the more ambiguous one and he made the right choice.

In the film, Tsotsi's concern for the child prompts him to force another young mother (Terry Pheto) to breastfeed the infant at gunpoint and her relationship with Tsotsi, while contained in relatively few scenes, really stands at the heart of the movie, as she gains the power in the relationship and subtly guides Tsotsi to do what's right.

In another great ambiguous choice, Hood doesn't overplay their relationship either, refusing to let the audience know if there is a true friendship or even romance burgeoning between the two. Tsotsi also is amazingly concise, clocking in at about an hour and a half.

The only other foreign language Oscar nominee from last year that I've seen, Paradise Now, also managed to pack strong drama in nearly the same running time and it truly makes me wonder why American filmmakers can't seem to do the same, feeling compelled to bloat their films past the two hour mark as if shorter films can't be taken seriously.

Gavin Hood's commentary does provide some insights into Tsotsi and the choices he made. It also drives home how prevalent the use of CGI has become, when even this low-budget, South African film used special effects to make it appear as if ants were crawling all over the baby's face.

Hood also explains that the movie has updated its time period to current times whereas Fugard's original novel was set in the 1950s under apartheid, when the white government was really beginning to be oppressive. He said Fugard approved of the changes and I think Hood again made the right call because by making Tsotsi a contemporary story as it adds a universality to it that might not have been possible if set in the bygone time.