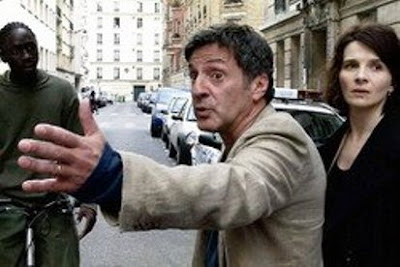 By Edward Copeland
Making films that purposely choose not to spell everything out for the audience is a difficult thing, but Michael Haneke is becoming a master of it, as exemplified by his 2005 film Cache (Hidden), which I just caught up with on DVD. I've only seen three films by Haneke (the others being Code Unknown and The Piano Teacher), but I'm fast becoming a fan of his style. He reminds me of Lars von Trier with a head that isn't full of mush.

It's almost beside the point to try to describe what his films about, especially Cache (Hidden) which at its heart plays like a mystery, but one where the solution is besides the point except to spark discussion among its viewers.

In an interview on the DVD, Haneke says the film is basically how people deal with guilt, as seen through the character of Georges (Daniel Auteuil). However — in an almost mysterious way — Haneke grabs your interest despite the fact you're never quite sure what is going on or where the film is headed. Somehow, you don't mind the lack of equilibrium.

Cache (Hidden), if it resembles any other movie at all, shares ideas with David Lynch's Lost Highway, only without the supernatural angles and with a much more cohesive tone.

Joining Auteuil as his wife is the great Juliette Binoche, who also appeared in Haneke's Code Unknown. Binoche also took the lead in Krzysztof Kieslowski's great Blue, another film that demands more of its audience than most movies. Perhaps we can forgive her for Chocolat.

My first exposure to Haneke was The Piano Teacher, which really tells a fairly straight-forward story and contains an absolutely fearless performance by the great Isabelle Huppert. Of the three Haneke films, it may be my favorite, but that's only because Cache is freshly dancing around my mind and I will probably need to go back to it again. Though, you have to be careful not to go overboard with your praise for Haneke's films — they are not everyone's cup of tea (as I'm sure Josh R might chime in about in comments), much in the way that not everyone is bowled over by Terrence Malick.

My fascination with Haneke's films may be a side effect of my jaded view of many films after a lifetime of seeing too many. After watching so many movies that don't even bother to try to challenge you, his movies are a welcome change-of-pace.

Comments:
Edward, I hope you will excuse an off topic post, but I saw you had linked to my weblog when it was still under construction.

Just to let you know it's officially inaugurated now :)