The Prime of Dame Maggie Smith 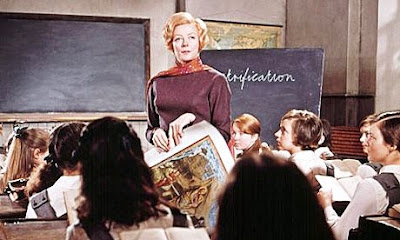 By Edward Copeland
I recently audited The Prime of Miss Jean Brodie for the first time in a long time — and for the first time in its proper widescreen ratio. While the movie was about how I remembered it, what definitely stood the test of time was the Oscar-winning performance of the great Maggie Smith. While in her later years, she has settled into a certain mode of role for the most part, she's still one of our greats and I regret that I've never been able to see her perform on stage.

As for the movie itself, it's more notable for its acting than its drama, though chunks of the dialogue are quite good. In addition to the great Maggie, there is solid work from her real-life husband Robert Stephens as the caddish art teacher, Celia Johnson as the prim head of the private school and Pamela Franklin as one of her most-seemingly devoted pupils with an agenda all her own.

In fact, the final faceoff between Smith and Franklin may be one of the best acting duets ever put on screen and really gives the film an emotional payoff that it might not otherwise deserve.

Of course, by now the setup of an eccentric, iconoclastic teacher has become a cliche in films such as Dead Poets Society, The Emperor's Club, Mr. Holland's Opus and far too many others to mention by name. Jean Brodie gets by because Smith makes her into such a force of nature that you can't help but stay tuned. Nowadays Maggie Smith is probably best known to younger viewers as Minerva McGonagall in the Harry Potter films, but there is so much more to her worth looking into. (Besides, all British actors are required by law to appear in a Harry Potter film — in fact I believe Paul Scofield is fighting that in court.)

Just three years after Jean Brodie, she earned another Oscar nomination for the delightful Travels With My Aunt. Six years after that, she scored another Oscar win for supporting actress — one of the best supporting wins in my opinion — playing a boozy Oscar-nominated actress on her way to her big night — and she loses. Her scenes with Michael Caine are really about the only thing worth recommending in this otherwise lame Neil Simon outing. Smith had better luck with Simon two years earlier, playing a parody of Nora Charles in the fun spoof Murder By Death opposite David Niven.

She even showed she could do "serious" murder as well, appearing in two Hercule Poirot outings Death on the Nile and Evil Under the Sun with Peter Ustinov. Now, it seems as if Dame Maggie has settled into a groove of upper-crust British roles, earning supporting nominations for Merchant Ivory's A Room With a View and most recently Robert Altman's Gosford Park.

She's not above being a little daring as well, as in her great work in the HBO movie My House in Umbria where she seemed to have no hesitation at flashing viewers a bit of her aging bosom.

Smith is a class act, equally adept at comedy and drama. I hope she can still get some really juicy parts because she deserves them. I still regret that I've never had the chance to see her on stage, so I really hope that she's got some great screen work ahead of her to satisfy me.

Comments:
Folks who haven't seen Jean Brodie - don't read this if you don't want to know to much about it, even though I don't discuss specific plot points.

As you know, Edward, I am a big Brodie booster - and while I agree that it's the acting which really makes the film soar, I'm not sure you give enough to the content, which is infinitely more subversive than anything in the Dead Poets family. What really sets Brodie apart from tepid "inspirational" teacher films like Dead Poets Society and The Emperor's Club is the way it examines how a dynamic teacher can exert a negative influence over her pupils rather than a positive one. In that respect, it holds kind of a unique position among films of the schoolroom genre - thematically, the others you've mentioned don't really deviate much from the template set by Goodbye Mr. Chips (which is really the granddaddy of all of them), showing how a great teacher can change his or her students for the better. I find the end of the film very interesting - it's a shot of Franklin's character walking away from the school, presumably of the last time, with tears streaming down her cheeks, as we hear a voiceover of lines from Smith's opening monologue: "Give me a girl at an impressionable age, and she is mine for life". The delivery is more sinister than when we first heard it - it's clear that, even though Franklin's character is the ostensible winner, has vanquished her foe, she's also the loser. We see her morph from a wide-eyed schoolgirl to a hardened cynic who has the ability to destroy another person without blinking, and it's the direct result of how Brodie's influence has shaped her. She has been irrevocably damaged by her contact with the woman she both loves and hates, and may never fully recover what her mentor has taken from her - not just her innocence, but a measure of her soul.

Three more great Smith performances worth checking out: First, as Peter Ustinov's dithery girl Friday in 1968 comic heist film Hot Million, for which Ustinov received an Oscar nomination for screenwriting. Second, as a small-town Lady Macbeth who drives her hapless podiatrist husband, played by Michael Pallin, to pig-knapping during the era WWII food rationing in Alan Bennett's screwball farce A Private Function, which is on dvd. Third, and one of her best dramatic performances, there is her heartbreaking performance in The Lonely Passion of Judith Hearn, as a spinster who becomes the helpless target for a sheming opportunist played by Bob Hoskins - a film that bears some similarities to The Heiress.

I didn't mean to imply that it was exactly like the later ones -- I agree it's definitely about a teacher exerting a negative influence, but it should be expected that later accounts of teachers would choose the inspirational path over the more morally ambiguous one.

I saw again recently "The Honey Pot" and Miss Smith was one of the main attractions!

Re: Britons playing stock Upper-crust roles every then and now, I'm sure there must be a curse related!

Josh - I share your high opinion of this film. I saw it at an impressionable age, and I was Miss Brodie's for life. Great summary of its unique qualities. It's also a superb example of literary adaptation, jettisoning some major plot points of Muriel Sparks' novel without diluting her wit or deleting any of her major themes.

i think your absolutly right about younger audiences knowing her for harry potter.

i think she's absolutly wonderful in Gosford Park. I love her role.