BLOGGER'S NOTE: The list of posts has been updated as of 9:30 A.M. CDT May 29. The list grows longer and longer. Thanks to everyone who is participating. 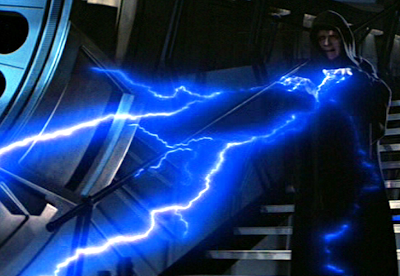 I have a confession: the photo above tells you all you need to know about what it would take to get me to join the Dark Side of the Force. The ability to fire lightning from your fingers? Sign me up. I can just imagine the joy it would bring the next time I'm in a theater and some yammering idiot won't shut up or takes a cell phone call. That would be sweet. On that note, let's officially begin the Star Wars blog-a-thon, marking 30 years since the landmark film opened in the United States and the world of cinema was changed forever, for good and ill. Please e-mail me your links (and put Star Wars in the subject line so I don't think it's spam) or leave them in comments on this post. Thanks to everyone who is participating. Look below for links to our contributions here and contributions elsewhere as they come in. Also, Jason at Petulant Ramblings has posted some classic magazine covers related to the films, Andrew James at MoviePatron.com is opening their blog to anyone who might like to post something and doesn't have a site of their own. The Palm Beach Post also has posted photos and memories of the series' fans. crazycris also has posted a tribute.

AND STILL I PERSIST
Bruce F. Webster talks about Paradise Lost (not the Milton poem)

BOHEMIAN CINEMA
Pacheco writes that It's Quiet in Space

CINEVISTARAMASCOPE
Andrew Bemis writes about experiencing the trilogy for the first time on the small screen.

CULTURE SNOB
Jeff suggests the failure of the second trilogy has to do with physical space.
A negative take on Revenge of the Sith.
On George Lucas deleting history.
Jeff also has a poll question to ask.

DVD PANACHE
Adam Ross asks, "Can't we all just enjoy Attack of the Clones?"
Adam also talks about the order he now prefers to watch the six films in.

THE EXPLODING KINETOSCOPE
Chris Stangl brings his original Sith review out of mothballs.

THE FILM EXPERIENCE
Nathaniel R. continues his series of screengrabs from 20 minutes and 7 seconds into films and finds himself on Tatooine.

gee bobg
Bob Glickstein says that a more important date for him was Aug. 5, 1977.
Bob goes contrarian on The Empire Strikes Back.
He also talks more about being a recovering Star Warsaholic.
Finally, he goes so far as to propose a remake.

I AM SCREAMING AND PUNCHING MYSELF
Catherine Cantieri on the infamous Star Wars holiday special.

JURGEN FAUTH
A close look at the first 90 seconds of Attack of the Clones.
In praise of Revenge of the Sith.
Finding similarities between Sith and 1963's Cleopatra.

LAZY EYE THEATRE
Pat Piper discusses how the taint of the second trilogy has colored his viewing of the original three.

MOSTLY HARMLESS
The Constructivist provides a brief history of Star Wars blogging at their site.

OLD IS THE NEW NEW
Rob MacDougall says that Old is the New Hope.

100 FILMS
Lucas McNelly asks if he's the only person who doesn't care about Star Wars.

SCREENGRAB
Repeats an interview with the director who made a series of Star Wars-inspired lozenge commercials in the U.K. a few years back.

STAINLESS STEEL DROPPINGS
Carl V. has had a week's worth of posts:
1. Invites memories of seeing the original.
2. Talks Star Wars swag.
3. Moments that make you giddy.
4. Looks at various Star Wars art.

THE SUBURBAN SCREENWRITER
He says, "May the (Ambiguous Mental Power) be with you.

TADHG.COM
Tadhg O'Higgins suggests What Episodes II and III Should Have Been, Part 1 (Episode II).
Part 2

waagnfnp
The Constructivist offers what he claims to be "The Best Star Wars 30th Anniversary Post Ever."

YESBUTNOBUTYES
Miss Celania shares her and others' memories of the first time they saw Star Wars.

Here's my first post of the day. The Best Star Wars Video Games!

Here is my contribution, Ed. :)

Here's my contribution, Ed:
What Episodes II and III should have been (I had to divide it into two parts, the second part will arrive tomorrow).

Ed, I just want to thank you for putting this blog-a-thon together. It's been great fun reading the articles.

I already e-mailed Mr. Copeland, but my post is up. Greedo doesn't live!

oops! I think I commented on an older post... here's my contribution! (from a personal blog, don't have a "movie" related one), I'm coming in through "The FIlmExperience" page... thx to Nat for the tip! ;o)
http://cristinabeans.bebo.com

I'm guess I'm surprised and delighted to see so many different types of entries. There don't seem to be any repeats in here.

I can't get the HTML to work for some reason, but here's mine:

An open letter to George Lucas

Why a live action version should be like the role playing video game.

My contribution to the anniversary is an article where a dozen writers share their memories of the first time they saw Star Wars.

An interview with Jedi Master Yoda

A poem on Revenge of the Sith

Thanx for the coolest blog a thon idea...had a blast contributing. Here is my post at http://thesuburbanscreenwriter.blogspot.com/2007/05/may-ambigious-mental-power-be-with-you_26.html

link got cut off--

sorry for the second try I suck at this :P

I found this great clip on jokes.m3Rlin.org. It's a great claymation movie about Darth Vader and the Emperor: http://jokes.m3rlin.org/funny/darth-vader-calls-the-emperor-claymation . I laughed so hard!!!

This is interesting I love starwars and you have this interesting blog site. But I am more interested to the Darth lords...they are so mysterious.
http://hubpages.com/hub/Why-the-Dark-lords-are-cool-than-Jedis-in-Star-Wars

I have a confession: the photo above tells you all you need to know about what it would take to get me to join the Dark Side of the Force. swtor credits swtor credits