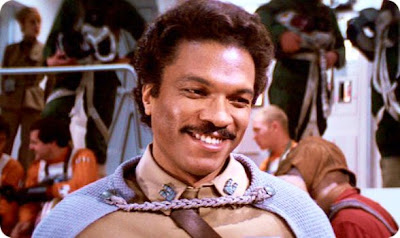 By Odienator
In 1978, when Rio Bravo screenwriter Leigh Brackett turned in her first draft for The Empire Strikes Back, the only brother who had been in a cinematic space ship was O.J. Simpson in Capricorn One. He wound up dead. A year later, Yaphet Kotto joined the Homeboys in Outer Space Club; this time they called it Alien. He wound up dead too. Leaving the earth was an unlucky thing if you had a permanent tan. George Clinton and Parliament landed the Mother Ship on Earth for a reason — it was safer.

Eighty-seven minutes into The Empire Strikes Back, Lando Calrissian made his first appearance, greeting his old buddy Han Solo on the landing pad in Cloud City. Lando was a brother, which meant his name must have been short for "Rolando Calrissian," and he was played by a smoother than silk Billy Dee Williams. At the Hudson Mall Twin, where I had seen the aforementioned dead brothers in space features, my cousins and I looked up at the screen and knew two things: Lando was going to be dead before the movie ended, and he was going to offer the Princess some malt liquor. We were wrong about the former; the latter is still open to debate. 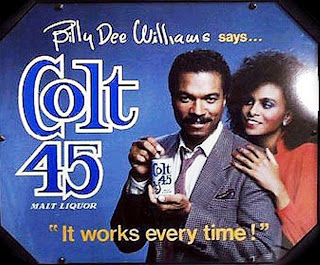 Before Billy Dee brought the ultra perm to the cosmos, he endeared himself to women with his suave performance in Diana Ross' Lady Sings the Blues. He was so smooth and sexy that some critics called him the "Black Clark Gable." He continued to endear himself to women by appearing with Miss Ross again in Mahogany, one of the worst movies ever made. His onscreen persona was ladies' man, and we wanted to be as good with the women as he seemed to be. We could never get as lucky as Billy Dee, but he was willing to help us find an alternative: Colt 45. Mr. Williams looked at us from our TV sets during Soul Train and told us that Colt 45 malt liquor "works every time." I was an adult when I realized he was telling me that, after about 10 Colt 45s, a woman would look at me and see him instead.

But I digress. Lando Calrissian is the only human character in the entire Star Wars series who is allowed to acknowledge his horniness. He's not onscreen 30 seconds before he makes a beeline for Princess Leia. He completely forgets about pal Han Solo, whom he hasn’t seen in ages, and starts running his game. "Hello," he says to Leia, "what have we here? I'm Lando Calrissian, the administrator of this facility. And who might you be?" Reading it won't do justice to Lando's delivery. The man is wearing a cape, for God's sake, and it's blowing in the wind like a superhero. If John Williams wrote soul music, there'd be a wah-wah guitar on the soundtrack. When Leia introduces herself, Lando says "Welcome, Leia," then slowly takes her hand and kisses it. It takes an eternity for him to give her hand back; in fact, Han Solo has to retrieve it. As Leia walks away, C-3PO tries to introduce himself, but Lando's too busy watching the Princess leave to care. The Empire Strikes Back is rated PG, but Calrissian's intentions are a hard R.

Later, Billy Dee reminds us of his commercial aspirations. "Would you join me for a little refreshment, Princess?" he asks after a come-on line that puts Anakin's ridiculous "I don't like the sand" come-on speech to shame. Walking into the room, he coos to Leia "you look absolutely beautiful. You truly belong here with us in the clouds." Cloud City even sounds like something that comes in a 40 oz. bottle. Leia remains suspicious of Lando, and with good reason. Said refreshments turn out to be a giant swig of Darth Vader. In a move that made our jaws drop in the theater, Lando sells out our heroes to the enemy. For us, it was almost as big a shock as that OTHER revelation in the movie.

Lando shares his "Hot for Leia" with Jabba the Hutt, but he shares his arc of redemption with Darth Vader. In the first trilogy, they are the characters who do awful deeds yet make up for them with later actions. Lando realizes that, in betraying Han Solo, he has also betrayed a much nobler cause that was on his side. Seeing the error of his ways, he joins a resistance that thankfully doesn't hold a grudge, and becomes one of the heroes of Return of the Jedi.

In Empire, we learn that the Millennium Falcon was once Calrissian's, but was won by Han Solo in a card game (shades of the Western genre to which Star Wars truly belongs). The end of Empire and most of Jedi puts Lando in the driver's seat of his former ship, making his plotline an integral part of the series. As Luke confronts Vader and Han and Leia have fun with my favorite non-human characters in the first trilogy, the Ewoks, Lando leads his squadron to the skies above Endor to destroy the new, improved Death Star. He gets to blow stuff up, bark commands and ooze the kind of cool Sam Jackson's Mace Windu wasn't allowed to exude. He doesn't get the Princess, but he gets to kick serious ass instead.

Falcon earlier in the series. It would have been fascinating, as they are both rogues and smart-asses, and he would have bested Walter Hill by two years, creating the popular Black guy/White guy partnership that films such as 48 Hrs. would emulate. I would have given anything for him to run a parallel storyline like this in any of the prequels instead of all that boring political nonsense he crammed into them. Han and Lando, the early days. What the "prequels" were missing was the sense of fun brought to the earlier series by characters like Han Solo and Lando Calrissian. Perhaps Lucas was so mired in his desire to make a statement that he forgot the series was supposed to be fun, even in the darker installments like Empire.

Until Will Smith came along, Lando Calrissian was the most popular Homeboy in Outer Space. If anything, he remains the smoothest ladies man in a galaxy far, far away.

Comments:
I always wondered what it would have been like if when Luke took off Vader's mask at the end of Jedi he'd have really found James Earl Jones there.

Edward, I fully expected to see James Earl Jones and was angry when I didn't. Talk about Nooooo...

Odie, the only other work in the Lando Calrissian analysis genre I know of is by Elvis Mitchell. His is witty; yours had me rolling.

Oh, brother, yes, the cape! When Empire came out, I hadn't yet seen any blaxploitation, but the pimp who admired Superman's cape a couple years earlier should have been a tipoff. That cape was more interesting than any character in the prequels.

EC: I always wondered what it would have been like if when Luke took off Vader's mask at the end of Jedi he'd have really found James Earl Jones there.

Woman in theater: Hmph! Look like somebody lied to Luke!

They need to dedicate an episode of Maury to James Earl Jones; he's EVERYBODY's baby daddy. He's Akeem's father in Coming to America. He's Simba's father in The Lion King. He's Luke's father in Star Wars. This man gets around, I tell ya!

Boone, I never read Elvis Mitchell's take on Lando, but my friend tells me there's an entire series of Star Wars books that follow his exploits through the galaxy.

As a side note, Tim Burton screwed Billy Dee over in Batman. If you recall, he played Harvey Dent in the first one, but when Two Face showed up in a later installment, he was played by Tommy Lee Jones. Imagine how cool it would have been to see someone known for their face play a character like Two-Face? "This works every time, Batman! BOOOOM!"

Odie, as Darth would say: Impressive!

It was called Lando Calrissian and the Mind Harp of Sharu.

Now THAT should be on a double bill with Cleopatra Jones and the Temple of Gold!

I started to read one of the Lando books. I can't remember if that was the one. All I remember is it described in great detail some kind of card game (Sabbacc maybe?) that I wanted to try to figure out how to play in real life.

Odie, this is the sweetest STAR WARS blog-a-thon entry... But don't blame poor Tim Burton for what happens in a Joel Schumacher Batman movie! The man made Jim Brown and Pam Grier the heroes of MARS ATTACKS! and fried Glenn Close, so he's obviously down.

Even though I panned Mars Attacks, I agree with you about Burton being down enough to make Jim Brown a hero. Any director who fries Glenn Close, especially for Cookie's Fortune, gets an extra point from me. So I shall blame Mr. Sparkle himself, Joel Schumacher. Booo!

I'm an idiot for not leaving this earlier:

My mom's favorite nickname for me is "Rylando Calrissian"...