By Edward Copeland
I admit it — DVD has decidedly changed my movie-viewing habits. Granted, fatigue has a lot to do with it, but it's rare that I watch anything from beginning to end anymore. The surprising thing to me is how little it seems to affect my opinion on the movie in general — and if something is really good, it will hold my attention no matter how tired I am. 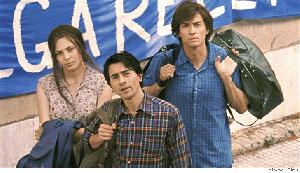 As I mentioned previously, it took me more than two weeks to get through Pat Garrett & Billy the Kid, but I'm not sure my opinion would have been much different if I'd seen the whole thing in a more reasonable period of time.

However, this was certainly not the case with The Best of Youth, Marco Tullio Giordana's six-hour story of two brothers spanning the years 1963-2000 in Italy. Because of its length, it's divided on two discs, which unfortunately no rental services seem to want to send out at the same time. As a result, I finished part 1 back on April 7 and didn't get Part 2 until a few days ago, finishing it last night.

Miraculously, I did remember most of what had happened before, but something was definitely lost by the interruption and it's a shame, because I think this is probably a very good movie. The leads — Luigi Lo Cascio and Allesio Boni — are both good as are most of the supporting cast, especially Sonia Bergamasco as Giulia and the great Adriana Asti (so memorable in Vittorio De Sica's 1970s film A Brief Vacation) as the men's mother. I really can't craft a coherent review of the film, due to the way I had to watch it, but even under those less-than-perfect circumstances, I could tell there was much to admire.

Perhaps some day I'll try it again when I can watch it in a more compressed time period. Mail rental services should really take steps to prevent this sort of delay.