In praise of South Park 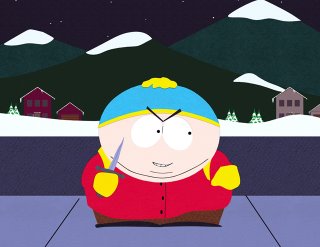 By Edward Copeland
I'm digressing from my usual film focus to sing the praises of television's South Park, which amazingly grows more assured and more satirically biting the longer it goes on — and Wednesday's night's episode was a supreme example and the best of this season's new offerings so far. This episode aired the same day the series won its first prestigious Peabody Award for being a show that "pushes all the buttons, turns up the heat and shatters every taboo. Through that process of offending it reminds us of the need for being tolerant." Always the rebel, they quickly produced a promo for Comedy Central simultaneously promoting their win at the same time they mocked the idea that they deserved a Peabody through quick clips of some of its edgier and more scatalogical moments. 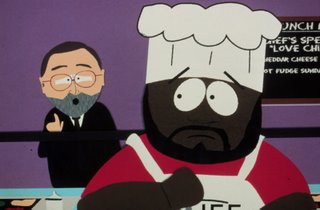 The series faced somewhat of a controversy before this latest season began when Isaac Hayes, who voiced the character of Chef, announced he was leaving the show because of "religious intolerance." Of course, he had no objections in the past when the show would skewer Catholicism, Mormons, Muslims and just about every other religion under the sun, but when they made fun of Scientology and Tom Cruise in a brilliant episode last season, it was too much for Hayes, also a practicing Scientologist. It also was apparently too much for Comedy Central, which has refused to re-air that episode since. The show dealt with the issue of Chef's departure in the premiere episode, substituting the "Super Adventurer Club" for Scientology and being generally hilarious — even to the point that they emphasized that Chef/Hayes wasn't to blame, the crazy religion was. This week, South Park went further, creating a premise that was firing at so many targets at once that the mind would positively boggle if you stopped laughing long enough.

The main story emphasized the climate of fear of reprisals of angry Muslims, taking the riots over the Danish Muhammad cartoons as its launching point. However, on top of that, they layered the censorship of their own program by substituting as the cartoon threatening to set off Muslims as Fox's Family Guy. On top of that, they included dead-on parodies of Family Guy and on-the-mark criticism of how bad that show is. (My favorite: a reputed al-Qaida tape by al-Zawahiri where he is supposedly saying, "and the writing isn't that good.") The townspeople of South Park, seeing a way to protect themselves from the oncoming attacks, pick the only method they can think of: they literally bury their hands in sand. 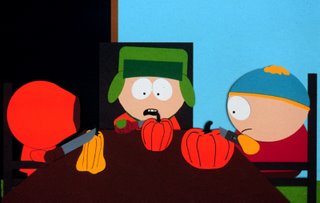 Personally, I was late in coming to South Park. When it first became a phenomenon, I couldn't get into it because I found it hard to understand some of the dialogue. However, when South Park: Bigger, Longer & Uncut hit theaters in 1999, I became a permanent fan. It's amazing how Trey Parker and Matt Stone's satire becomes even more on the money (and timely) as the series goes on. When I did catch up with older episodes, it's no contest. South Park is one of those rare series that gets better with age.

Contrast that to The Simpsons, which used to be the high-water mark for animated television comedy but for the past few seasons has been so lackluster, that I finally gave up watching it. I admit it — I'm a sucker for anything that frequently makes the case for freedom of speech, especially when it's funny, not preachy and even when it comes from potty-mouthed animated kids.

Cheers to South Park, Parker and Stone. Keep it up.

Comments:
I totally agree the show is awesome and the ideas that Trey and Matt come up with get better with age. South Park is one of my favorite shows up there with The West Wing and Twilight Zone (original, of course). Hey eddie I was hoping you could do me a favor if on one of your posts you could kindly mention the Top 100 here at Oscardiary I would very much appreciate it because I don't think we're getting the feedback that we want, I would be humbly pleased and I think people would like the idea remeber Oscardiary.blogspot.com Top 100 deadline's April 18.

Tell Comedy Central to grow a pair, and Tom Cruise to eat a fat one.. Sign the Petition