"It's not satire, it's sheer reportage" 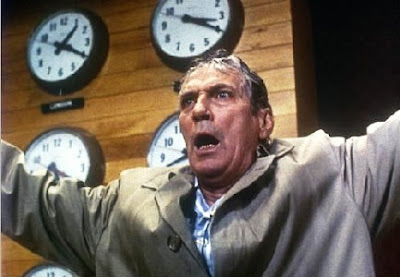 By Edward Copeland
Those words are Sidney Lumet's frequent replies to people who have complimented him over the past 30 years on his great film Network and his words grow truer with each passing year. Each time one revisits Paddy Chayefsky's masterpiece, you are startled by yet another section of near prophecy within it.

With the recent release of a sparkling 2-disc DVD set of the film, I returned to Network once again. I've watched this movie countless times, but it seems I always learn something new. The moment of prescience in the 1976 film that grabbed my attention this time is when Howard Beale urges his audience to stop an Arab front company from buying the corporation that owns the TV network and mentions in passing all the U.S. entities Arabs control including, "The Port of New Orleans." Gee — how about the for pre-9/11 mentality? I wonder if Dubya had watched the movie before the port deal went bellyup, he might have tried to deliver a rousing Ned Beatty-esque speech on corporate cosmology, but I imagine that speech contained far too many big words for Dubya to wrap his mouth around.

I've loved Network for a long time, but I'm curious as to how it would play to fresh eyes today when so much of what once seemed absurd, seems commonplace today. That's what makes George Clooney's screwball notion of remaking Network as a live TV event even nuttier. Clooney himself argued that he was shocked that kids today didn't get the satirical elements — so how exactly would re-doing it fix that — especially on network television, where the language would be sanitized — and he would try to find ways to update allusions to things such as Patty Hearst to today's audience. George, you've got your undeserved Oscar for supporting actor, now go back and make Ocean's 13 and leave well enough alone.

Excuse my rant, but it seems only appropriate when revisiting Network to let a little ranting shine through. You can almost follow the throughline from the appearance of Howard Beale to the likes of Morton Downey Jr. into the right-wind radio ravers of today.

One thing I learned from this new DVD set that I didn't realize before, since even the previous laserdisc version wasn't of the best quality, was the conscious decision Lumet and his great cinematographer Owen Roizman made to corrupt the image as the characters in the film are corrupted. It starts with almost all-natural lighting, then by the end it grows more and more artificial until it resembles, as Lumet says in the commentary track, "a Ford commercial."

Lumet also mentions in his commentary that everything the film foretold has come true except for the killing of a network anchor over lousy ratings. When you think about it, when CBS had to dump Dan Rather, weren't you a little surprised that they didn't kill him live on the evening news?

The acting is still as great as ever. William Holden, Peter Finch, Faye Dunaway, Ned Beatty and Beatrice Straight all deserved their Oscar nominations (and in the cases of Finch and Dunaway, their wins). The only regret to me is that Robert Duvall's great work in the movie always has been lost in the praise.

What's more amazing to me than Chayefsky's prescience is the brilliance of his dialogue. Has there ever been a movie with this many great, memorable lengthy monologues? When is the last time you saw a movie that had any lengthy monologue comparable to the bountiful supply Chayefsky's script produces. Of course, Finch gets the bulk of the great ones, but Beatty and Straight were essentially nominated for one great monologue each. Holden gets a couple as well. Really, Faye Dunaway's character is the only one who doesn't really get a lengthy monologue — and that makes perfect sense because, as Holden's character puts it, she is "television incarnate" and lacks the attention span for such lengthy language.

One criticism I've often heard made against Network is that it's preachy and really, I don't think that is true at all but stems more from people viewing it through the prism of what television is like today. It may seem like it's taking easy swipes at news as entertainment and reality TV — but those things, especially the latter, weren't as prevalent or widespread in 1976.

As for the DVD set itself, it's a must for any fan of the film. Not only is it the best copy of the film I've ever seen, Lumet's commentary is great — even if he repeats a lot from the excellent documentary on Disc 2 and his Robert Osborne TCM interview. The real find on the set though is an appearance by Paddy Chayefsky himself on The Dinah Shore Show surrounded by guests like Steve Lawrence. Unless you are a Kevin Smith or Quentin Tarantino, when is the last time you saw ANY screenwriter as a guest on a talk show (and George Clooney doesn't count).

Network has been on my all-time 10 best list for a long time — and I don't think it's going anywhere anytime soon.

OSCAR ADDENDUM: Coming off this year's Oscars, where four films tied for the most wins with three each, it's worth noting that in 1976 Network and All the President's Men tied for the most with four wins each — but best picture winner Rocky only managed to take home three.

Comments:
What can you say? It's just a great movie, and a true expression of 70's angst. No one even comes close these days to writing dialogue that literate, and you're right about the photography. I think it's Lumet's most accomplished film visually. He tends to be either workmanlike (excellent) or insufferably pretentious (not so excellent).

All that stuff about being prophetic has been bandied around so much, though, that it does feel a little calcified, and ceases to have much meaning now. If I put my nitpicking hat on, I'd say that the "mad as hell" scene goes on a bit long, a few too many windows open with people yelling. It feels to me like one of those "come,come Travis,every night?" moments. Even for the 70's, this famous sequence overplays its hand a little bit.

Network is good example of a film I've come to appreciate more with time. When I originally saw it as a high schooler, it seemed to me that Chayevsky's nightmarish version of television as the gateway to the downfall of American civilization was overly paranoid and ridiculously far-fetched. As it turns out, Chayevsky had only scratched the surface - when you look at the level on which television functions these days, Network's version of TV hell looks relatively subdued. It's not just the proliferation of exploitative reality shows which trade on the humiliation of desperate people looking for 15 minutes of fame and a quick buck (watch Joey eat a pig rectum to advance to the next round!) - but the way the media has given up on reporting actual news in favor of following tabloid tragedies (shout-out to Greta van Susteren) or, worse still, to engage in the dissemination of skewed political propoganda while falsely labeling as news (shout-out to Rupert Murdoch and his grisly crew of "fair and balanced" Dubya-boosters at Fox). As long as they can stay competetive in the ratings market, television honchos will continue to blur the line between news and entertainment, without much regard for the fact that they're doing a disservice to the American public.

I agree that Network offers a wealth of great performances, particularly by William Holden, who provides the film with its weary voice of reason and serves as Chayevsky's mouthpiece, and by Faye Dunaway, eyes burning with the glow of one possessed in a hyper-energized performance as the personification of television's amorality. Duvall, Beatty, and Peter Finch are great as well, although I agree with Dave that some of Howard Beale's on-air scenes are more shouted than acted. Speaking of which, I'm still a little befuddled as to how Beatrice Straight, who shows up and shouts for a bit, bested the likes of Jodie Foster in Taxi Driver and Piper Laurie in Carrie at the Academy Awards.

Sorry - Dave's point was that too many people were shouting out of windows, not that Finch was shouting too much.