From the Vault: To Die For 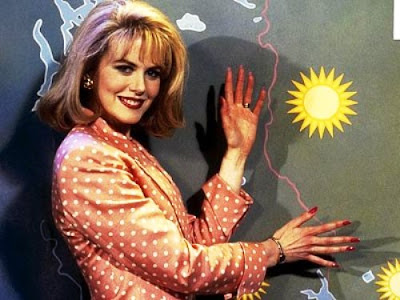 During the long, arduous O.J. Simpson saga, broadcaster Bob Costas made one of the most salient points of all. Costas said we've reached a point where being famous has become a virtue in and of itself and people no longer achieve celebrity for actual notable accomplishments.

The movie, based on Joyce Maynard's novel and featuring a brilliantly biting script by Buck Henry, turns out to be everything Natural Born Killers should have been and wasn't.

To Die For begins with one of the best title sequences in recent memory (created by Pablo Ferro and aided by Danny Elfman's kinetic score) that instantly tells the audience all it needs to know before the film dives into its subject matter. The novel was loosely based on Pamela Smart, the New Hampshire high school teacher who was convicted of seducing a teen in order to get him to murder her husband.

In To Die For, Suzanne is naive and ambitious, happily in love with her husband Larry Maretto (Matt Dillon). Suzanne bullies her way with charm into a weathercasting job at a local cable station. Eager to compile an impressive video resume, Suzanne starts a documentary on local teens, a project that brings her into contact with a trio of ne'er-do-wells: Lydia, an insecure 15-year-old (Alison Folland) and her classmates, troublemaking Russell (Casey Affleck) and dim bulb Jimmy (Joaquin Phoenix).

As Suzanne begins to feel that Larry impedes her electronic dreams (he wants a family), she coerces the already lovestruck Jimmy into her bed and her sinister plot to off Larry. With the points-of-view darting from person to person, Van Sant moves the action along briskly, resulting in a headlong rush through today's tabloid media, making its points without giving the audience a concussion (as in Natural Born Killers).

The actors form a terrific ensemble: newcomer Folland, bringing life to the typical role of the awkward teen; Illeana Douglas as Larry's suspicious, ice-skating sister; and Dillon as the dull but decent Larry. Phoenix also is fine, though he pushes his characters low IQ a bit too hard at times. Kidman, like Suzanne wants to be, provides the sun all the other characters revolve around. For those who dismissed her as merely superstar Tom Cruise's wife, be prepared for a shock: her performance as Suzanne Stone can't be ignored.

In perhaps the most illustrative example of Kidman's work here, and of the movie itself, watch the sequence where Suzanne receives the news of her husband's murder and welcomes the reporters to her front lawn. Aside from the fact that it's a swift, funny, well-acted film, To Die For reassures the audience that, even though the subject matter can hardly be called new, a good movie can still be made about it. This movie proves that talent can get you anywhere, even at the same time it shows that lack of it might not hurt you either.