From the Vault: Sexy Beast 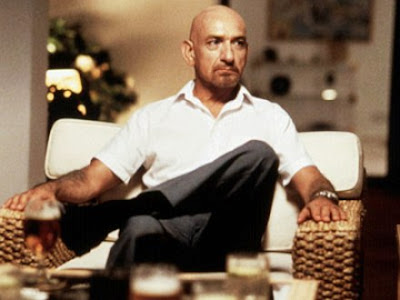 By Edward Copeland
Don Logans of the world, prepare: Anyone who meets you for the first time after seeing Sexy Beast will likely look upon you with a sense of unease. Ben Kingsley gets the blame for this, because the Don Logan he creates in Sexy Beast takes his place alongside some of the most fearsome screen creations ever summoned.

While Kingsley steals the picture, Ray Winstone stars. Winstone plays Gal, a retired British thief who has abandoned his life of crime for a cushy life in a Spanish villa with his ex-porn star wife Deedee (Amanda Redman).

One night at dinner, they learn from their friends Aitch and Jackie (Cavan Kendall and Julianne White) that Logan is en route to lure Gal back to London for a heist.

The sheer mention of Don Logan's name freezes the four in their tracks and with good reason. Logan is pure violence with a thick English accent. Gal is still determined to stay retired, but Logan doesn't plan to take no for an answer.

While the film is interesting throughout, it's when Kingsley takes charge of the screen that Sexy Beast comes to life. His ferocious performance will astonish anyone who thinks of the Oscar winner only as Gandhi. Even his stillness sends shivers down one's spine. His scenes are funny and frightening at the same time, making Don seem like a calmer version of Joe Pesci's Goodfellas character.

The movie turns out to be an odd hybrid of crime drama, dark comedy and terse conversation reminiscent of playwright Harold Pinter. While Kingsley is the standout, he's not the only actor giving a great performance. In addition to Winstone, Redman, Kendall and White, there is a wonderful performance by Ian McShane as a London kingpin who is as cool as Logan is fiery.

First-time director Jonathan Glazer keeps the film moving, though it does suffer when Kingsley isn't on the screen. However, Don Logan's presence reverberates even when he's not there in person and makes Sexy Beast worth a look.