From the Vault: Reservoir Dogs 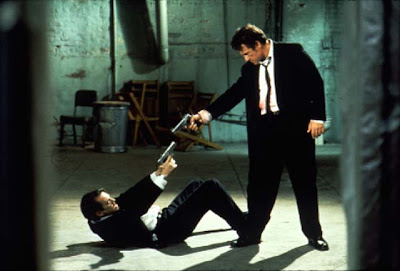 Eight men sit around a table, speaking the language of the streets while debating Madonna song meanings and the morality of tipping. Except for two of the men, they are all dressed in matching suits and ties. They could belong to any profession but in Reservoir Dogs they are criminals and in the hands of first-time filmmaker Quentin Tarantino, their story is one of the most all-out entertaining films of 1992.

The film mainly takes place in a warehouse, where the assorted crooks are supposed to meet following the robbery to collect their payment for jobs well done.

The problem is, someone apparently tipped off the cops to the heist and the surviving criminals begin to turn on each other in their attempts to discover the traitor in their midst.

Tarantino exhibits real flair in his direction and script, as the film takes on an unpredictable structure of flashback and straight narrative, letting the audience know just a little at a time until its blood-drenched finale.

Because of the language and violence in Reservoir Dogs, Tarantino has drawn comparisons to Martin Scorsese. It is another example of the attempt to pigeonhole artists early in their career, much in the way Spike Lee was declared to be "the black Woody Allen" following She's Gotta Have It. As Lee's career since has shown, he's much more multi-faceted than that, and Tarantino should be given the same opportunity to explore his artistic bents.

What can be said of Tarantino though, is he is another promising member of the next generation of filmmakers. The artists of the post-baby boom generation are making themselves known and Reservoir Dogs is the latest example.

In addition to the always dependable Keitel, the film boasts solid performances from Steve Buscemi as an acerbic member of the gang, Michael Madsen as a dangerous member of the team and, most notably, Tim Roth who gives a marvelous performance in the film's most brilliant extended flashback.

The script sparkles with wit, albeit dark wit, and the machinations are reminiscent of Deathtrap, as one wonders who will get the better of whom until its ending brings about the most appropriate ending to a film exploring criminal mythos that I can remember.