From the Vault: Mulholland Drive 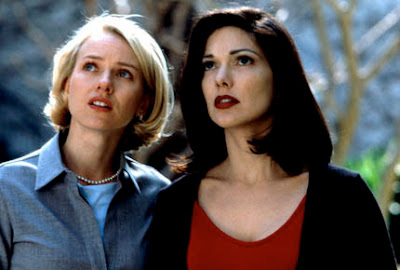 Twin Peaks co-creator Mark Frost once said the TV series he spawned with David Lynch was more about the journey than the destination. That sums up Lynch's film career, from Eraserhead through his exquisite G-rated surprise, The Straight Story, to his latest release, Mulholland Drive.

Mulholland Drive began life as a television series. After ABC passed on the two-hour pilot, Lynch got financing to expand the film into a stand-alone theatrical release. Lynch's new film returns to the land of dreams and nightmares, self-parody and general silliness that is a joy when it works (as in Twin Peaks on television) but unbearable when it doesn't (see Lost Highway).

In many respects, Mulholland Drive turns out to be his most satisfying excursion into this realm.

It's pointless to describe the story of Mulholland Drive, which, in vague terms, tells a story of Hollywood focusing on a troubled director and two women, one an aspiring actress, the other an amnesiac.

However, the plot is just an excuse to explore Lynch's recurring theme of duality and, in some cases, multiplicity.

As is the case in most of Lynch's work, his cast is at the mercy of his whims, so much so that you're uncertain about their talent. This time, Lynch proves his point within the same film, most notably with Naomi Watts as the naive, wanna-be starlet.

Watts' performance is so wide-eyed that she sparks laughs as she uncovers Hollywood's seamier side. The tables are turned on the audience when Watts replays a scene in a casting director's office, putting an unexpected spin on dialogue the viewer heard only moments before.

Mulholland Drive isn't perfect. The first hour and a half is spellbinding, but it wears out its welcome in its final hour as it spins in darker, less coherent directions.

Then again, Lynch has produced another movie as fever-dream, and logic doesn't apply. If you're not a Lynch fan, Mulholland Drive will prove frustrating. If you are, sit back and enjoy the ride.

Comments:
When I first saw the film this year, my reaction was similar to yours -- "this is often fun and powerful, but it's ultimately nonsense." But according to Wikipedia, "film critic David Sterritt spoke with Lynch after the film screened at Cannes and wrote that the director "insisted that Mulholland Drive does tell a coherent, comprehensible story," unlike some of Lynch's earlier films."

Then I spent some time on the "Lost on Mulholland Dr" website, particularly with Alan Shaw's essay, and I grew more and more fascinated. I think he errs on the side of over-interpretation, but still points out tons of seemingly deliberate things that I would never have noticed. The first half is definitely a "Wizard of Oz"-like dream of Naomi Watts' Diane rationalizing her failure at her career and at love, while the second half is the "darker" reality.r

Lynch. His very name says what should be done with him (grin) for having perpetrated so many monstrous time-wasters.