From the Vault: Miller's Crossing 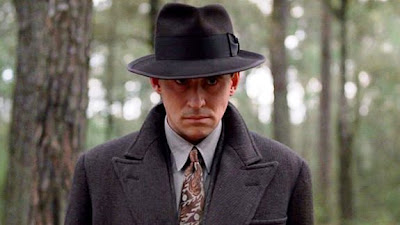 By Edward Copeland
The camera has calmed down, but the Coen brothers' craftsmanship proves better than ever in Miller's Crossing, their meditation on a corrupt town and the gangsters who run it.

Gabriel Byrne stars as Tom Reagan, right hand man to Irish mob boss Leo (Albert Finney). Tom keeps his emotions in check, never loses his cool, plays everyone against one another and prides himself on being a son of a bitch. Miller's Crossing's plot weaves such a labyrinthine story that it's futile to try to explain it here. Mood dominates this homage to the work of Dashiell Hammett. Some inconsistencies crop up, but the ride is too enjoyable to worry about them.

In Joel and Ethan Coen's previous films, Blood Simple and Raising Arizona, they built their reputation with manic camera moves and unusual angles. Miller's Crossing provides a more placid picture, making its mark with characterization and nice set pieces, particularly when two strongarms come to pick up Tom and a nice moment involving a dog, a boy and a body.

Byrne takes his central role and makes it the film's strongest point, completely becoming the enigmatic protagonist. Even by the end, his motivations remain cloudy but he's the pivotal player and gets some of the best lines such as "nobody knows anyone that well."

Marcia Gay Harden provides other fine moments as Verna, Tom's lover, Leo's girlfriend and the sister of Bernie Bernbaum (John Turturro), the character whose actions ignite the movie's momentum. Turturro, best known as Danny Aiello's racist son in Do the Right Thing, makes an indelible impression in his small role.

Finney, always excellent, shines even though his character barely appears though the sequence involving the attempted hit more than makes up for his absence. Jon Polito and J.E. Freeman get to have fun as a rival Italian gangster and his shadow. Polito blusters memorably while Freeman, who was frightening in David Lynch's Wild at Heart, adds another character to his gallery of ghouls you wouldn't want to encounter in a dark alley.

Joel's direction moves the films along well while managing to make the complicated plot fairly clear. "There is nothing more foolish that man chasing his own hat," Tom says at one point in the film and hats prove to be the major motif. People give and receive "the high hat" or take off their hats or lose them in poker games. Do the hats mean anything? The Coens say it is free of any plot connection. Who knows, but hats off to Miller's Crossing anyway.

Comments:
I dunno, I always thought there was a very low homosexual subtext going on here. I'm always surprised more people don't see it, unless I'm just chasing windmills. Leo and Tom are basically in love. And the way Tom spurns Verna, esp. in the scene where he holds his gun to keep her at bay. The way he's holding it... man! Yah, definitely a gay subtext going on there.

Even if there is a gay subtext, which I could certainly see, it doesn't make the film any less good.

I'm sorry I wasn't clearer. I didn't mean to imply it makes the movie any less good. I think the movie is amazing and remember talking about it for hours afterwards with my movie date. I've just always been intrigued by the Coen's employment of the gay-subtext. It's very clever on their part. And that most reviews I've read about the film don't mention it. I actually just googled it and only found a handful of reviews that jibe with what I saw - although I see that IMDB forum for the movie has long discussions about it. I think it just proves that the Coen's did a bang-up job on the film. Kudos to them.