From the Vault: Kevin Smith 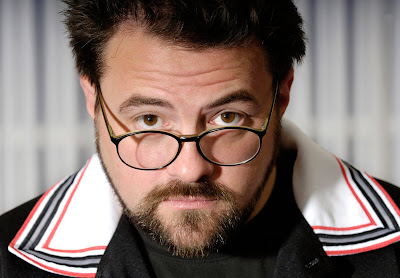 After five films (six if you count Scream 3), Jay and Silent Bob are retiring from the live-action realm with a cinematic swan song, Jay and Silent Bob Strike Back. No one seems more relieved at putting the New Jersey pals to rest that Kevin Smith, who created the two characters and plays Silent Bob. Now, Smith can concentrate on his real love — writing and directing — and leave the acting to others.

"I don't feel the need to be in movies if I'm not playing that character anymore, which is nice because then I can just sit behind the monitor and get really fat during production."

In the film, Jay and Silent Bob set out to stop production of a Miramax film adaptation of the comic book they inspired in the movie Chasing Amy. Though Jay and Silent Bob Strike Back is being released by Dimension, a division of Miramax, the studio's parent company comes in for a lot of ribbing, even though Miramax gave Smith his start with Clerks in 1994.

While the business relationship still is strong, it soured slightly in 1999 when Miramax — under pressure from its parent Disney — dropped distribution of Smith's controversial religious comedy Dogma. When Harvey Weinstein, half of the sibling pair that founded Miramax, saw Smith's script for Jay and Silent Bob Strike Back, he asked good-naturedly what the studio had ever done to Smith.

"Remember that movie of ours that you dropped? This is payback."

The plot is a loose excuse for a wild road comedy full of nonsequiturs and inside jokes. After the accomplished Chasing Amy and the ambitious Dogma, Smith admits the new film hardly is a step forward.

"This is a quantum leap backward. We've not matured. We've just gotten so much worse. After (what we) went through on Dogma, it was just kind of nice to make joke after joke after joke."

The characters of Jay and Silent Bob evolved into something much larger than Smith's intention. He based the sex-obsessed Jay on the man who plays him, Jason Mewes, or, more accurately, what Mewes was like when Smith met him 12 years ago, when Mewes was in his early teens.

"We grew up in the same town. He was kind of a kid of local folklore. I got to know him through some mutual friends who brought him into our fold and then they abandoned him. I guess they lost interest in him and I kind of inherited him. He'd just show up at my house and knock on the door and say, 'You want to hang out?'"

Originally, Smith resisted, but Mewes won him over.

Among the many Smith movie veterans returning for Jay and Silent Bob Strike Bob is Ben Affleck, who appeared in Mallrats, Chasing Amy and Dogma while making big-event features including Armageddon and Pearl Harbor.

Joining the Jay and Silent Bob family this time is Will Ferrell, who improvised a lot on the set. Affleck tried improvising in Mallrats, Smith recalled, but didn't get as much leeway with the script.

Still, most of Ferrell's best ad-libs ended up on the cutting room floor because, Smith said, no matter how funny, they often slow things down. Another special newcomer on the set was Smith's now 2-year-old daughter, Harley Quinn, who plays an infant Silent Bob in the movie's opening scene.

"Directing her was bad. They say don't work with children and they are absolutely right. The kid who played Jay in that scene was really well-behaved and my kid was like screaming. 'You're supposed to be Silent Bob, not Screaming Bob.'"

While moving on to non-Jay and Silent Bob film projects appeals to Smith, he's still involved with another great love, comic books. He's writing a 12-part series of "The Green Arrow."

"For me, it's great. It's wonderful to kick back and write something like 'Green Arrow,' where you don't bring any of your own baggage to it. You're playing in someone else's sandbox, so to speak, and you don't have to worry about ... telling their back story. It's also really good exercise in writing something that isn't comedic."

The New York Post has reported that Smith's next project will be a smaller comedy-drama, close in tone to Chasing Amy, about Smith's experiences as a father. Affleck has been signed to the project and Smith hopes to reunite him with Chasing Amy co-stars Jason Lee and Joey Lauren Adams. Smith said he also hopes to make a film "based on the Gregory McDonald book Fletch Won, which is kind of a year one story of Fletch, how he first got the job on the paper." If the project comes together, Smith hopes to cast Lee as the young journalist.

While Smith admits Jay and Silent Bob might surface in an animated Clerks movie or in comic book form, he's determined to make this movie their last live-action outing.

"Rather than beat a dead horse or have them overstay their welcome, it's time to leave the party before we're the last guys there. We need to get out while the getting's good. Remember when people used to love Pauly Shore? Then one day, everyone hated Pauly Shore. I don't want to be Pauly Shore."

Still, Jay and Silent Bob have their ardent admirers, one of whom implored Smith as he left the interview room not to end their tales.

"It's not a door closing, it's a door opening."