From the Vault: Fargo 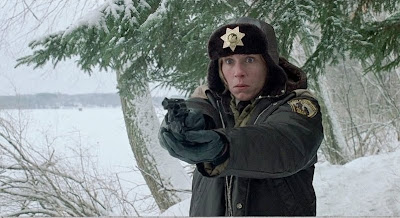 Throughout the Coen brothers' career some have criticized their work for being contemptuous of their films' characters. I enjoyed most of their movies (especially Blood Simple, Raising Arizona and Miller's Crossing) and never felt that their critics were right or that their attitude was a problem until their latest work, Fargo.

Fargo does mark a return to their smaller tales following the wondrous sets of Barton Fink and The Hudsucker Proxy. In a way, it seems like Joel and Ethan Coen have crossed Blood Simple with Raising Arizona without equaling either film's success.

Despite its title, most of Fargo takes place in Minnesota, where debt-plagued car dealer Jerry Lundegaard (William H. Macy) has devised a plan to have his own wife kidnapped in order to collect money from her wealthy father. The plan goes way off track as the hired thugs (Steve Buscemi, Peter Stormare) have a fatal encounter and Lundegaard botches his own plan to double-cross the crooks.

Their plot begins to come unraveled at the hands of a very pregnant local police chief (Frances McDormand) whose investigation into a roadside slaying leads back to Lundegaard's scheme.

For people unfamiliar with the accents of Minnesota, most of the characters' voices will seem mightily overdone. Coupled with the many dim bulbs, these factors contribute to the feeling that the Coens are just out to make fun of Minnesotans, not tell an interesting story.

The most flagrant example of this attitude is a scene in which the police chief has dinner with an old friend from high school who tells a sad story about his late wife. Unfortunately, the scene is played for laughs. When the punch line comes later, it makes the sequence seem all the more unnecessary.

Only two characters escape this trap. McDormand creates a winning character in Marge Gunderson, but arrives too late in the movie to save it. The other actor is Harve Presnell as Lundegaard's father-in-law, a smart tyrant who cares about his daughter and couldn't care less about his son-in-law.

The technical credits are adequate, including a nice score by Carter Burwell. Fargo is not without its moments of humor and tension, it just doesn't come together cohesively.

The strange thing is that the longer you're away from the movie, the more it lingers in your memory, especially McDormand's great supporting turn. It's worth a second viewing, just to see exactly what it's supposed to be.

Comments:
Well, Ed, as someone who took a long time to come around to this movie but now really admires and enjoys it on a lot of levels, I think this is an interesting review, with some statements I wholly agree with and some I find plain strange, namely your three-sentence summation of the Mike Yanagita character; why do you say that his scene is played for laughs? Surely it's deliberately awkward and painful at best, before you know the truth, and then it's powerful and tragic to reflect on after you DO know the truth behind the scene - and I guess if you didn't like the scene in the first place, you will consider that the punchline makes it seem unnecessary; I couldn't disagree more...Maybe because there were comic moments elsewhere in the film, you were unsure whether to laugh or not? I probably was equally unsure on the first viewing - and that brings me to the point of yours which I agree with: 'Fargo' does linger, and should be seen at least twice, so good on you for encouraging viewers to give it a second chance!

I was fortunate that I got to see Fargo well before it opened and all its acclaim hit, so my initial reaction wasn't to what everyone else was saying. When it did receive so much praise, I did revisit it, twice actually, my opinion didn't change much. In fact, I found more problems with the film. In the scene you refer to, I didn't so much feel as if it were played for laughs as if it were played to make you feel sorry for the guy, only to have that rug pulled out beneath you in a bit of throwaway dialogue for no good reason that made the entire sequence even more unnecessary to the film's story itself. I like to compare it to another 1996 film featuring Frances McDormand, Lone Star. Throughout the film, Chris Cooper makes a few references to his unstable ex-wife and then McDormand appears to play her in a single scene and blows you away. It's not particularly a pivotal or vital scene in terms of Lone Star's story, but it does deepen Cooper's character. The same cannot be said for the scene in Fargo.