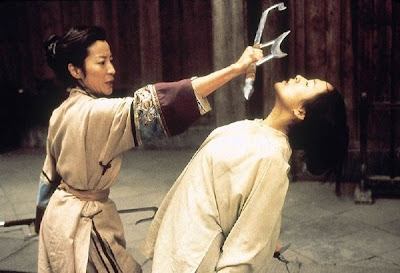 By Edward Copeland
All might be fair in love and war, but that rule doesn't always apply in the ancient China of Crouching Tiger, Hidden Dragon, 2000's most exhilarating film. Director Ang Lee, who gained notice with Taiwanese films such as Eat Drink Man Woman and English-language productions such as Sense and Sensibility and The Ice Storm, ventures to mainland China for this astounding reinvention of the martial arts genre.

When you spell out the plot elements of Crouching Tiger, it reads like a list of standard film scenarios — stolen artifacts, campaigns of revenge, star-crossed lovers, etc. In other hands, the story would be tired, trite and recycled, but Lee and scriptwriters Hui-Ling Wang, James Schamus and Kuo Jung Tsai infuse the movie with such passion and energy that everything old seems new again. Chow Yun-Fat stars as Li Mu Bai, a gifted fighter from the Wudan school who decides to hang up his sword — literally — by sending longtime friend Shu Lien (the great Michelle Yeoh) to give his beloved weapon, Green Destiny, to a respected friend, while Li pursues a path of peace. Things never go that smoothly for a movie warrior.

Someone steals Green Destiny, and its theft is linked to Li's nemesis, the Jade Fox, the female fighter who killed his mentor many years before. Complicating the situation is Jen (Zhang Ziyi), the young daughter of a governor that Shu Lien meets when delivering Green Destiny. The freedom of Shu Lien's fighting life fascinates Jen, who is pledged to marry a man she doesn't love.

Jen envies Shu Lien's lifestyle, despite Shu Lien's insistence that it's not all it's cracked up to be. Jen — and the breathtaking young actress who plays her — holds the film together. Jen harbors many secrets, the biggest of which is her apprenticeship with the Jade Fox herself. Unlike her evil mentor, Jen just loves the challenge of the fight, stunning those who encounter her with her amazing Wudan-like skills.

The Wudan school teaches a fighting style that allows its disciples to soar over rooftops and dance across walls as if flying, but Jen can't attend the school because of her gender. Yes, believe it or not, there's a strong feminist undercurrent to this romantic fight fest, but don't let the subtext preoccupy you — just enjoy the ride.

What's great about the film's fantastic martial arts technique is that the movie offers no explanation for how its practitioners defy gravity. Enraptured audiences won't care. It's similar to that moment in The Muppet Movie when Kermit the Frog rides a bicycle. You don't need to know how they did it — just sit back and watch in awe.

While the martial arts may be the film's main attraction, the romantic elements are nearly as strong. There is Li and Shu Lien's bittersweet relationship. Shu Lien and Li share, in addition to great fighting skills, an unconsummated love of many years. Shu Lien was once engaged to a comrade of Li's who was slain defending him, but loyalty to his memory forbids a romance.

Meanwhile, the unhappily engaged Jen pines for Lo (Chang Chen), a bandit she met when his gang attacked her entourage in the desert. In a glorious extended flashback, the film tells Jen and Lo's story, which starts as a brawl and ends in an embrace. Their courtship is even more exhausting than the real thing, with a payoff just as sweet and an end just as devastating.

Simply put, Crouching Tiger, Hidden Dragon is exquisite. When two warriors take their fight to the top branches of towering trees, they aren't as far off the ground as the moviegoers, whose joy has lifted them to film heaven.