From the Vault: Bonfire of the Vanities 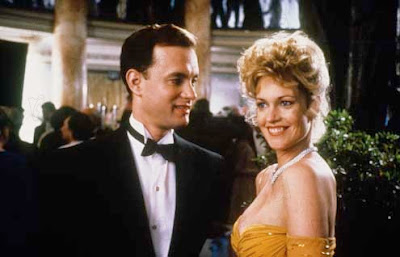 No pretenses: Being a huge fan of Tom Wolfe's best seller, it would have been impossible to be unbiased about this film. Particularly with one of the largest list of miscast parts in the history of film adaptations.

However, there was no way that I could be prepared for how bad Brian De Palma's rendering of Bonfire of the Vanities would be.

Even if someone hasn't had the benefit of reading the novel (and I very much recommend it. It's cheaper than the film's ticket price and infinitely more satisfying), it's obvious that the characters that appear on screen have no integrity.

For the unfamiliar, the story details the fall from grace of Sherman McCoy, a "master of the universe" on Wall Street with an aerobicized wife, a charming daughter and a lot of debt to keep up the appearance of upper-crust Manhattan wealth.

In addition to the trappings of success in the 1980s, Sherman (Tom Hanks) has a mistress, Maria Ruskin, the wife of an older, wealthy industrialist. After picking up Maria from the airport one night, the clandestine couple miss their exit and end up in the Bronx. Their well-bred WASP necks turn a bright shade of red as they suddenly find themselves surrounded by lots of African Americans.

While trying to find their way back to the expressway, the two find a tire in the path of Sherman's Mercedes. When Sherman gets out to remove it, he encounters two black youths and, thanks to his Caucasian paranoia, he ends up throwing the tire at them while Maria drives the two away, hitting one of the young men in the process.

This is one of the first large mistakes that De Palma's version makes. In the book, it was completely unclear if the men had dishonorable intentions. On film, it implies that they most certainly did. However, the biggest error this film makes is telling it from the point of view of tabloid journalist Peter Fallow (Bruce Willis).

Fallow was British in the novel, but he's just American in the movie, though for some reason all of his companions still have English accents. Willis' character, aside from the drinking, is not the same character that helped spark Sherman's fall in the book. In fact, Fallow's narration tries to turn McCoy into a hero. There aren't supposed to be heroes in this story. You have to develop a certain sympathy for McCoy by the end, but the changing of the film's ending even diffuses that element.

The most disturbing element of the film is its depiction of the angry African Americans. They aren't developed as human beings, tired of the two-faced way the justice system treats them as opposed to whites. Instead, they are portrayed as shrieking mobs, without a sense of outrage or purpose.

Even more disturbing about this aspect of the film is that the filmmakers, worried that it would be perceived as racist, cast the gifted actor Morgan Freeman as the judge. In the book, the judge was an older Jewish man named Myron Kovitsky. Wishing to have a positive black role, Freeman got the part, ironically renamed Judge White.

Then again, why should one worry about the clashes of culture and ethnic groups that were at the heart of the novel when the people who made this movie obviously didn't care about filming the novel's points? Instead, they chose to emphasize the comic aspects as slapstick rather than satire.

The performances are all particularly weak, though it is difficult to know whether to blame the actors or the bastardized script they were given. Hanks, glaring through capped teeth, doesn't have his inherent likability as a hindrance to a good performance, but his character was a realistic person who has been transported into a live-action comic strip. Dick Tracy's villains had more believability beneath their makeup.

Melanie Griffith has transformed the amoral but intelligent Maria of the novel into a bubbleheaded idiot. Willis sleepwalks through the ruined Fallow. Freeman is forced to deliver the most cloying, idiotic speech at the end of the film when it desperately seeks to find meaning in its one-dimensional world.

The worst casting is Kim Cattrall as Sherman's wife Judy. One of the few sympathetic characters in the book, this actress of Porky's and Mannequin fame turns Judy into a poorly acted caricature. In fact, only two characters come off well. F. Murray Abraham is good in an unbilled role as the district attorney and Geraldo Rivera is completely believable as an exploitive television journalist.

De Palma's direction is showy but without benefit. The script is horrendous and the actors suffer with the stick figures they've been given to play, wandering through vague interpretations of New York and the judicial system. One can't help but wonder if it's too soon to remake this film in an attempt to do it right. Wolfe hasn't commented publicly on De Palma's debacle, but at least he got $750,000 for the movie rights. All I got was a splitting headache and a nauseous stomach.