From the Vault: The Age of Innocence 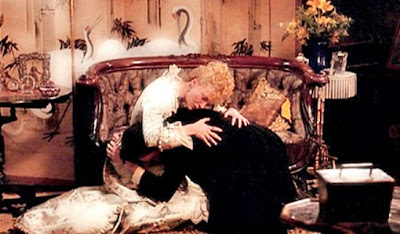 Flowers erupt sensually into bloom in the opening credits of The Age of Innocence, exploding with an intensity and passion that wasn't tolerated in the era it depicts. That time and place is New York's high society in the 1870s as Edith Wharton so beautifully described it in her Pulitzer Prize-winning novel.

With The Age of Innocence, director Martin Scorsese once again has staked his claim to the unofficial title of America's greatest working filmmaker, this time by making a film that would seem completely out of his realm but which, upon closer examination, turns out to contain many themes common to his other works. He substitutes grandeur for grit, psychological violence for physical brawls.

The Age of Innocence concerns the struggle between individualism and society and the complications of falling in love with on person when you've committed to someone else. A young lawyer named Newland Archer (Daniel Day-Lewis) is happily engaged to a seemingly dense woman named May (Winona Ryder). Archer practically bursts with joy at his impending nuptials — until he meets her cousin, Countess Ellen Olenska (Michelle Pfeiffer).

The social scene keeps Ellen at arm's length when she flees Europe and her philandering husband to return to New York. Society frowns upon her actions, not so much for making a bad marriage to an outsider but for admitting her mistake publicly and leaving the situation. In the 1870s, her social circle viewed it as better to be married and miserable than divorced and at peace.

Archer and Ellen's chaste and pent-up longing gives The Age of Innocence its emotional wallop. Adding to that, the film slyly depicts the social scene itself, including frequently funny passages culled from the novel itself and read in voiceover by Joanne Woodward.

Scorsese and co-screenwriter Jay Cocks were wise to include Wharton's prose, not only because it pleases the ear but because it actually aids the film's clarity. On all levels, The Age of Innocence succeeds resoundingly. From Elmer Bernstein's mixing of original and classical music to form a pulsating score to Dante Ferretti's production design, Michael Ballhaus' cinematography and Gabriella Pescucci's costumes, the film overwhelms.

The film shows the serving of so many elegant meals that it makes you long to have attended one of the dinners, despite the consequences. Scorsese's direction, which includes many of his most subtle touches, gets ample aid from his veteran editor Thelma Schoonmaker (as in a nice scene that literally goes beneath Archer's outer veneer to find a secret hidden in a shirt pocket).

The acting excels across the board. Day-Lewis and Pfeiffer draw their characters so well that the audience begins caring about them almost from the moment they appear. Ryder also does well playing a young woman who isn't as dim as she appears and Miriam Margolyes provides a nice comic turn as Mrs. Mingott, a grande dame of New York society.

However, the film belongs to Scorsese, who injects what could be a staid costume drama with an energizing passion. Sprinkled with Wharton's wry observations, it seems a perfect collaboration despite the fact that Wharton died long before Scorsese was born.

The Age of Innocence resembles the opulent meals it takes pleasure in recreating. It looks and tastes great and when it's over your hunger for exquisite filmmaking has been more than satisfied.

Comments:
When you took this out of the vault, I gotta think you knew what was coming...I can't think of any other film about which we disagree more vehemently, or which has provided the basis for more spirited debate over the years.

I more or less despise The Age of Innocence, which has always struck me as a beautiful but dramatically inert piece of cinematic taxidermy. To me the acting seems stiff and formal - as if everyone had learned their lines in elocution class - the pacing lethargic, the dialogue stilted, the characterization unconvincing and the narration annoying. I've been accused by certain parties (ahem) of disliking Age because it isn't a "Scorcese" film - something I would refute. I don't think Scorcese need limit himself to the mean streets of the boroughs with characters breaking each other's kneecaps while spewing obsenities in Noo Yawk accents - I love, for instance, After Hours, one of the more attypical films in the Scorcese canon. I also love literary period pieces when they're done well - I worship at the altar of Howards End, which is beautiful to look at but at the same feels true to life. It just seems to me that Scorcese can get too caught up in the epic aspects of filmmaking - his overindulgence with the design aspects occasionally has a somewhat masturbatory quality - and his loses sight of the small-scale human drama at the story's core. The result is a style of filmmaking which is visually resplendent but artificial and stilted - empty pageantry that seems specifically designed for no other purpose than to snag Oscar nominations.

And yes, I still think Scorcese is a genius.

Josh: The result is a style of filmmaking which is visually resplendent but artificial and stilted - empty pageantry that seems specifically designed for no other purpose than to snag Oscar nominations.

I'd agree with you if you were talking about The Aviator or Gangs of New York, but not here. Innocence is proof, along with Alice Doesn't Live Here Anymore that Scorsese can successfully get his usual themes across without resorting to his usual cussin' and tusslin'.

I'm not going to accuse you of disliking Age because it's not a Scorsese movie. This is as much a Scorsese movie as Taxi Driver (and I said so in this article a while back). The film has an internal quality that I liked; it's as if I were living inside the book. I was not distracted from the story by the sets and visuals. They felt right, and I, like the characters, felt suitably trapped within them. And while Anthony Hopkins did this kind of martyrdom for society much better in The Remains of the Day, Day-Lewis gives a better performance here than the one he got nominated for that year.

Emma and Helena notwithstanding, I think Age is better than Howard's End. (My favorite Merchant-Ivory is still A Room With a View which stars...ut-oh! Daniel Day-Lewis!)

And the only thing After Hours is atypical of in terms of Scorsese is that it's damn near unwatchable. Other than that, it pretty much hits all his usual points, so it's still Marty's movie. I kept praying that Brit werewolf thing would get Griffin Dunne again. My prayers were not answered.

And no, I'm not going to quantify that statement with "I still think Scorsese is a genius." As I learned from my own standing as a genius, being a genius means you only have to be preternaturally good at one thing. It doesn't mean you're perfect. As another genius director once wrote: "Nobody's Perfect."

Wow. I get to disagree with both of you. I love The Age of Innocence and After Hours.

Interesting, Edward, that in 1993 I had grudging respect, but not love, fo "Age," privately feeling that Scorsese had traded in Jake La Motta's boxing gloves for Newland Archer's opera gloves and that it was more about surface than about interiors, more an homage to Visconti's "Senso" than original Scorsese. The film's initial cut lacked Woodward's elegant voice-over narration, which was appended later. Each time I've seen it in recent years, though, the film rises in my estimation. Day-Lewis and Pfeiffer are transcendently moving at hiding the flames consuming their hearts and Ryder has never been better as the steel-reinforced, porcelain-pretty society princess. And I, too, love "After Hours."

I didn't realize that Woodward's narration was added later. I remember being disappointed when the film's release was delayed from 1992 until 1993, but if that was one of the changes that caused the delay, it was well worth the wait.