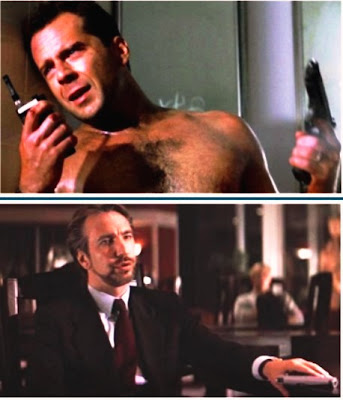 “People get involved here, and that’s the thing. If people are patronized, if a film is geared toward a short attention span, then it’ll have a short shelf life. Films that involve that audience and embrace that ‘once upon a time’ principle have a chance of lasting…We’re storytellers and we forget that at our peril.” — Alan Rickman

By Edward Copeland
That Rickman quote appears on the text commentary on one of the many DVD versions circulating for the movie Die Hard. When Die Hard exploded into theaters in the summer of 1988, I didn't rush to see it. The reviews were mostly mixed to negative, and the action films of that era were low on my priority list (especially since, back then, I had to pay to see movies). When I finally ventured out to see it, it had moved to a dollar theater and a group of my bored friends and I decided to check it out for lack of better options. We arrived late, so it wasn't until seeing the film again on video that I caught the foreshadowing of the airplane passenger advising John McClane (Bruce Willis), as they're arriving in L.A., that the best way to readjust to Earth after a long flight involves removing your shoes and socks and making fists with your toes in carpeting. It takes more than one viewing of Die Hard to truly appreciate how much work and thought went into its construction and composition and to catch all the allusions (not just the obvious ones) to classic films.

SEE REST AT THE HOUSE NEXT DOOR