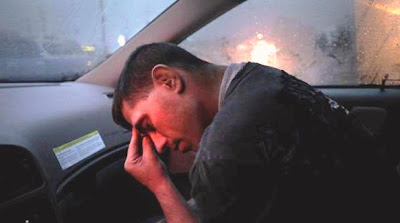 By Edward Copeland
Since we've been embroiled in our era of endless American combat since 9/11, moviewatchers haven't lacked in documentaries covering a wide range of aspects related to the conflicts in Iraq and Afghanistan. With the Oscar-nominated documentary feature Hell and Back Again, director Danfung Dennis and editor Fiona Otway achieve a great nonfiction film that's impressive on both technical and emotional storytelling levels.

Dennis had served as a photojournalist for years in both Iraq and Afghanistan but, according to the film's press materials, he felt that the public had grown "numb" to still photographic images of war so he looked into filming combat and became an embed with a company of Marines serving in Afghanistan in 2009. Wanting to capture the front-line military experience in a way he hadn't seen before, Dennis modified cameras and sound recording equipment to get as close to the sights and sounds of the fighting as they could.

Dennis, accredited as a photojournalist for The New York Times, joined up with Echo Company, 2nd Battalion, 8th Marine Regiment, far behind enemy lines shortly after the Marines launched a major air assault on a Taliban stronghold. The director hadn't gone in with plans to make a film. All he brought with him was body armor, his camera and a backpack. Within hours of hooking up with the unit, Dennis got to film his first firefight as troops he was with were surrounded by Taliban forces as the Marine unit tried to seize an area known as Machine Gun Hill. Temperatures reached 130 degrees and one Marine handed Dennis his last water bottle. That Marine was Sgt. Nathan Harris and that introduction led to this remarkable film.

What makes Hell and Back Again stand out isn't just the frighteningly close battle footage. That impresses to be sure, but I don't know that it brings a viewer closer to the combat and the carnage than what was shown in Restrepo, but while Restrepo is very good, Hell and Back Again is better because it zeroes in on a specific Marine in Nathan Franks.

Other documentaries also have focused on an individual U.S. fighter, but Hell and Back Again abandons a chronological narrative, jumping back and forth between the footage of Franks and his unit that Dennis filmed in Afghanistan and what Franks' life turns into when he returns home to his wife Ashley in North Carolina after being severely wounded on the battlefield — both physically and mentally.

The switches in time and location never jar the viewer thanks to the superb editing of Fiona Otway, who had a helluva task not only in forming the film's visual rhythm but culling more than 100 hours of footage into an 88 minute documentary. Many documentaries for a long time have shown the influence of narrative features on the way they are made — especially many of the works of Errol Morris — but Hell and Back Again might be the first nonfiction film the shows signs of Quentin Tarantino's influence, only minus the pop culture-laden dialogue. It even has an original song sung by Willie Nelson.

Now, I'm not trying to give the mistaken impression that Hell and Back Again provides a rip-roarin' good time at the movies. The techniques employed to tell the story do elicit a bit of enthusiasm within me, but the tale of Nathan Franks itself does not. War scenes tend to be harrowing, but watching a man readjusting to civilian life as a member of the nonwalking wounded can be even more saddening and scary.

Often when movies, be they fiction or nonfiction, toggle between two time and places, one inevitably ends up being more interesting than the other, but the filmmakers had the golden touch here, whether we're in Afghanistan watching Sgt. Franks try to calm Afghan villagers complaining about helicopters or back in North Carolina observing Nathan show an older woman at Wal-Mart also in a motorized chair like his the start of his battle scar on his ass.

Those at-home scenes contain the heart of the film. Hell and Back Again actually builds more suspense than many fictional thrillers do. I had no idea going in what happens to Nathan Franks other than he wasn't killed in combat. However, when you see him frequently breakdown and toy around with a gun and mock Russian roulette, you don't know, especially with the fractured chronology. It's a documentary that deserves a spoiler alert.

I've only seen two of the five Oscar-nominated documentary features so far, but between the two, Hell and Back Again leads by a mile.

Hell and Back Again is the first feature film to be shot entirely with a highly customized Canon 5D Mark II digital SLR camera rig. Canon most likely did not intend people to shoot feature films on it and certainly nobody could have envisaged [sic] the results this rig would achieve on the front lines.

I’ve (director Danfung Dennis) been inundated with questions asking what camera rig was used, so I will keep this technical to try to answer them. The Canon 5D Mark II is capable of unprecedented image quality, but since it is a stills camera, there are several limitations that I had to address before using this camera in a warzone.
The first problem is with audio. I used a Sennheiser ME-66 shotgun mic and G2 wireless system running into a Beachtek DXA-2s (I’ve since upgraded to a Juicedlink DT-454), which converts professional XLR mics into a minijack suitable for the 5D. I built custom aluminum ‘wings’ to hold this audio setup.
The second problem is stabilization. The design of the Canon 5D Mark II makes hand-held video shooting difficult. I mounted my whole system onto a Glidecam 2000 HD with custom rubber pads on the mount and a foam earplug to suppress the vibration of the lens. The rig is very heavy and it took about two months to get my arm strong enough to shoot extended shots. I cut up a Glidecam Body Pod to make it fit with my body armor and used it to rest my arm when I was not shooting.
To achieve a cinematic look when shooting in bright daylight, I shot at f2.8 at 1/60th or slower, which requires a drastic amount of reduction of light that hits the sensor. I used a Singh Ray Variable ND filter. While the filter can reduce the amount of light by 2 to 8 stops, I had serious problems with uneven coverage, so part of my frame would be darker than others. I have tried Fader ND filters, but also have the same problem.
Another issue is that all focus must be done manually after recording begins. The only way to address this was a lot of practice racking focus. I was not able to rack focus when running, so I often had to try to stay the same distance from my subject to keep them in focus. The most frustrating problem was that the camera would overheat after about 15 minutes of continuous shooting in 120-degree heat. I had no
option other than to turn it off and let it cool. I did not have a spare body.