How to Survive in South Central 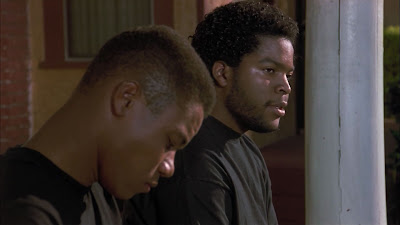 By Jonathan Pacheco
South Central Los Angeles, 1991. It’s not a neighborhood or a district, but rather a demon, a sadistic, permeating creature with a fierce grip on homes, boulevards and parks. Precious few slip from its grasp to find life and liberation while those who can’t find themselves possessed by rage, violence and misunderstanding. When we meet them in Boyz N the Hood, Tre (Cuba Gooding Jr.) and his childhood friends Doughboy (Ice Cube), Ricky (Morris Chestnut) and Chris (Regi Green) all find themselves in the clutches of South Central L.A., desperate to be free from the self-destruction it inspires within the black community.

Though writer/director John Singleton’s debut film makes its message perfectly clear to us from the opening moments (feeling a bit like a Spike Lee joint as it opens with statistics of black-on-black murder rates followed by a none-too-subtle camera push into a “STOP” sign), it does so with deft skill and trust in its audience to watch and understand what it’s trying to present. Singleton’s storytelling, while personal and timely when it was released, remains universal 20 years later not only in its call to end same-race violence, but in its promotion of the importance of father figures — the key, Singleton argues, to surviving the South Central demon.

The journeys of Tre, Doughboy and Ricky are ones we’ve seen many times by now, so a newcomer to Boyz N the Hood might have an easy time foreseeing what ends these characters will meet, but Singleton still handles the material better than most because he stays true to the world he’s depicting, never attempting to exaggerate or overdramatize for the benefit of his message. Unfortunate events don’t come as a surprise, as there’s a tension and sense of foreboding that comes across in every scene, even in moments of hope; you can feel the dark presence of South Central hovering over these lives — unrelenting and heartless.

But being shot on your way to the grocery store or finding yourself in the middle of a gang rivalry while hanging in Crenshaw isn’t the only thing these boys fear. When Tre confides to Ricky that he’s still a virgin, he explains that it’s out of fear — not of the sexual act, but of the possibility of becoming a father. He leaves his confession at that, but we can see that his worry stems from more than the usual difficulties of teenage fatherhood. We’ve seen Tre’s interaction with his own dad, Furious Styles (Laurence Fishburne, at that time billed as “Larry”), and we know he and everyone else respects him as a “real man.” At one point Tre teases his father, calling him an old man despite his mid-30s age, but we know he’s only half joking; he does see his father as an old man, just not in literal years. Furious has seen a lot and read even more. Equal parts wisdom and charisma, he’s a powerful, authoritative, but endearing presence. He knows people. More importantly, he knows his people, displaying the ability to relate to his teenage son, the dangerous hoodlums of Compton and a bitter, finger-pointing old-timer all with the same speech, each of them walking away feeling as if they just listened to Malcolm Farrakhan (as Doughboy puts it). How could Tre, if he were to become a father before getting out of high school, live up to the example of the one and only Furious Styles, who once spoke the proverb, “Any fool with a dick can make a baby, but only a real man can raise his children”?

The film reminds us repeatedly that a boy needs a true father to learn how to be a true man, which is why Ricky — an all-around good kid in contrast to his pistol-wielding brother — despite his mother Mrs. Baker (Tyra Ferrell) doing a fine job in raising at least one of her sons, is still missing some key lessons on the path to manhood. Singleton makes the point that if Mrs. Baker’s boys had a strong male presence during their formative years, not only would Doughboy have avoided the critical, crippling mistakes of his life, but Ricky may have avoided the few that have held him back as well (namely, becoming a young father and naively choosing to join the “white man’s army” to find his life purpose). When we first come upon Tre after the incidents of his childhood, he’s walking into a “Welcome Home” barbecue following Doughboy’s release from prison, and Mrs. Baker stops him at the entrance, asking him to spend more time with her son in hopes that the intangibles Tre possesses, the ones that seemingly protect him from the plaguing issues of South Central L.A., will rub off on her troubled son. But what Tre has isn’t entirely intangible, is it? He’s the only kid on the street with a real father hanging around; neither Doughboy nor Ricky nor Chris can claim the same, and it shows.

And yet, as written by Singleton and as pitch-perfectly played by Fishburne (who leads an excellent and exciting group of performances by Gooding, Ice Cube, and Chestnut), Furious isn’t beyond questioning. As Tre’s mother (Angela Bassett) points out, the man deserves credit for stepping up and raising his child, but that doesn’t make him special, especially when some of his parenting techniques can be questioned (like his surprisingly relaxed policy regarding his son’s sex life, which simply calls for protection from unwanted children and unwanted disease). While his eloquent views on eliminating black-on-black murder inspires his own race, his views on the white government — a government that supposedly encourages the elimination of blacks and whose army has no place for people of his color, as he tells his son — can only be dangerous to goals of interracial harmony. The important thing, however, is that Furious is there — flaws and all — and he cares, and that’s ultimately what enables Tre to survive that which his friends could not.

Comments:
It's been a long time since I've seen Boyz. I liked it a great deal at the time, though I thought at times Furious was placed as The Message more than a character as good as Fishburne always is. Then, when I saw Menace II Society two years later, I felt it was so much superior in covering many of the same issues without beating the audience over the head with its points. It's sort of sad though that after such impressive debuts, both Singleton and The Hughes Brothers have basically dropped off the film industry radar.