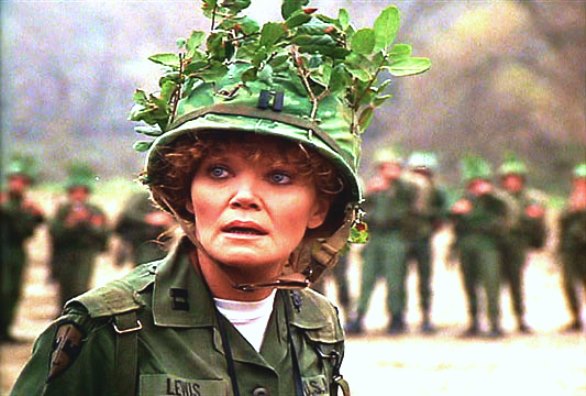 Eileen Brennan, one of our most treasured character actresses, particularly when it came to roles with a comic spin, lost her battle with bladder cancer Sunday at 80. Her death was announced today. The prolific actress turned in many memorable performances, but probably will be best remembered as Capt. Doreen Lewis in the 1980 comedy Private Benjamin opposite Goldie Hawn and the subsequent television spinoff where Lorna Patterson took over for Hawn. The role of Capt. Lewis earned Brennan her sole Oscar nomination and three consecutive Emmy nominations, one of which she won.

After moving from her native California, Brennan performed some stage work with the Mask and Bauble Society at Georgetown University in Washington before returning west and beginning her film and television career. In 1966, she made her first television appearance in a production of Maxwell Anderson's play The Star Wagon where she starred opposite Orson Bean and whose cast included Dustin Hoffman and Marian Seldes. The next year, she made her film debut in Bud Yorkin's 1967 comedy Divorce, American Style with a cast that included Dick Van Dyke, Debbie Reynolds, Jason Robards and Jean Simmons. She was a regular on the first 14 episodes of Rowan and Martin's Laugh-In in 1968 and put in guest appearances on the TV series The Ghost and Mrs. Muir and The Most Deadly Game. With 1971 came the release of her second feature film and a true classic. This showed more of Brennan's abilities on the dramatic side of things as Genevieve the waitress in Peter Bogdanovich's The Last Picture Show. She even earned a BAFTA nomination as best supporting actress, quite a feat given the spectacular assemblage of female performers Bogdanovich gathered for his film. Along with her many episodic TV appearances, around the same time she appeared in the memorable All in the Family installment "The Elevator Story." In 1973, she had roles in two significant films: Scarecrow starring Gene Hackman and Al Pacino and that year's Oscar winner for best picture, the delightful caper comedy The Sting opposite Paul Newman and Robert Redford.

Brennan appeared in both of Neil Simon's 1970s film spoofs, usually attached by the hip to Peter Falk, in Murder By Death and The Cheap Detective. She guest-starred in a particularly memorable episode of Taxi, "The Boss's Wife," and earned an Emmy nomination as lead actress in a comedy series (the same year she won supporting actress for Private Benjamin). To get even with her husband, Mr. McKenzie, once a year, Mrs. McKenzie (Brennan) picks an employee of the Sunshine Cab Company to have an affair with, resulting in her husband's anger and the worker's firing. Louie (Danny DeVito) delights in the annual ritual — only this time she picks De Palma. Guest appearances on Newhart, thirtysomething and Will & Grace also brought Brennan Emmy nominations. Back on the big screen, she brought the game piece Mrs. Peacock to life in Clue and reprised Genevieve in the 1990 Last Picture Show sequel Texasville.

RIP Ms. Brennan. When you appeared on screen, I knew that whatever I was watching would be getting a lift.

Comments:
She was simply splendid in so many films. She will be missed greatly. May she RIP. Fine tribute, Ed.