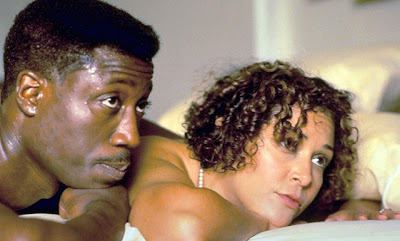 By Jonathan Pacheco
Spike Lee’s Jungle Fever is an uncompromisingly pessimistic examination of our society’s inability to accept two people of different races coming together in love or lust. Twenty years after the film was released, I’d like to think our society has progressed somewhat from the plaguing issues Lee harps on in the film, but no doubt, the problems remain simply as an extension of the greater racial misconceptions we still harbor, even if prejudices these days seem to be slightly more about culture than literal skin tone. Lee’s intentions, as usual, come from a place of passion and good will, but the director seems to get lost in his own film, becoming a little too self-involved to fully take care of his characters and his audience.

The interracial affair between Flipper (Wesley Snipes), an ambitious black architect in an all-white firm, and Angie (Annabella Sciorra), his new Italian secretary from the temp agency, is the catalyst for the rest of the film’s painful and occasionally violent events, but their relationship is unrealistic and unconvincing at best. Granted, Jungle Fever is indeed a melodrama occasionally bordering on allegory (the name “Flipper Purify” should tip you off to the character’s trajectory), so heightened emotions and exaggerated sequences of events should be expected, but even in that context, Flip’s head-spinning 180, going from trying to get Angie’s white butt fired because she’s not an African American to screwing her on his drafting table, all in near-record time, is absurdly comical in a way Lee probably never intended.

Lee’s passion and anger for the film’s topic is clear from the opening moments as the director dedicates the film to Yusuf Hawkins, a black teenager who, at the time of this film, was the latest victim of several New York City incidents of white mobs killing black men after they were suspected of dating white girls. The matter was fresh in Lee’s mind, so it’s understandable that his film might characterize people and events a bit more extremely to get his audience’s attention, but I fear that some of his tactics, namely portraying nearly every character as a shameless slur-slinging racist, makes his message slightly off-putting and less accessible to those who need to hear it.

Samuel L. Jackson’s much-lauded and award-winning turn as Flip’s crackhead brother Gator still ranks among his best (heck, whenever he’s at least tolerable I consider it an accomplishment), but it almost feels like a wasted performance since the subplot of Gator’s addiction and estrangement from the Purify family never jells with the rest of Jungle Fever. It always entertains, like the hellish sequence involving Flip desperately trying to find Gator in the “Trump Tower of crack houses,” and sadly, the arc is far more developed than the central Flip/Angie relationship, but it’s so ill-fitting in this particular film, lingering awkwardly even after the other main plot threads have been tied up.

Across all storylines, Jungle Fever examines how different people fight the adversity they face. Once Angie and Flipper become pariahs of their respective worlds, they shack up in an apartment together, half as a “screw you” to those who disapprove of their union, and half because it’s their only remaining option. Angie’s attitude toward the situation exhibits her defiance; sick of being pushed around by her father and brothers, she’s willing to ride out this taboo relationship to the end, perhaps seeing something in it that never was there. Flipper, however, needs the shelter of his racial community, the one that empowered him to stand up to his discriminatory bosses earlier in the film. Throughout Jungle Fever Flip has fallen back on race, always playing the victim to the white man’s oppression, so when he’s forced to live without that crutch, stuck in a relationship created by an affair of mere curiosity (or so he claims), he does everything he can to deny the relationship altogether, from secretly trying to reconcile with his wife to berating Angie for publicly acknowledging that the two are lovers.

Paulie (a wonderful John Turturro), the good-hearted neighborhood guy that Angie left for Flip, is a social punching bag for most of Jungle Fever and was often encouraged by Angie to push back against his own oppressors (usually her bullying brothers). He eventually fights adversity with defiance as well, but not one guided by sexual passion, curiosity, and confusion, but by logical thought and genuine emotion.

His regulars at the shop he runs bust his balls incessantly for one thing or another, and it’s during one of these sessions that Spike Lee hides the key to Paulie’s eventual personal liberation. The young, abrasive Italian and Jewish men in the shop land on the subject of New York politics one morning, in particular their displeasure with having a black mayor (David Dinkins, who referred to the city as a “gorgeous mosaic” of diversity when he took the oath of office) instead of their own personal white choice, Rudy Giuliani. When Paulie goes around the room asking how many of these knuckleheads even voted in the last election, every one had an excuse except for Paulie himself, who indeed voted — for Dinkins.

So when Paulie eventually chooses to ask the kind, encouraging, attractive black patron (Tyra Ferrell) out on a date, it’s not out of some “jungle fever” lust or curiosity, it’s because Paulie knows his heart and knows his reasons for being attracted to her are real, just as he knows his reasons for voting for David Dinkins are genuine, not color-based. Paulie’s defiance of racial taboos, both as an honest citizen and as a human being looking for a relationship with solid footing, may be the film’s most sustaining message after 20 years.

Comments:
I remember that being one of its main problems: Its side stories were so much better and more interesting than the central one between Snipes and Sciorra, though those diversions were so good it made it worth it. The Turturro and Jackson stories as you mentioned (until the ending of the Gator strand) and that great scene with Snipes' wife (Lonette McKee) and her friends sitting around bitching about black men leaving them for white women.