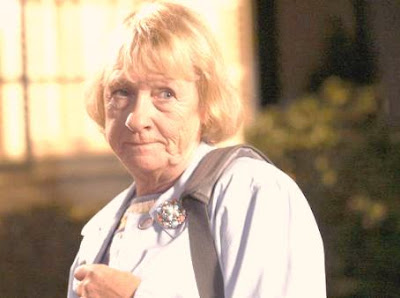 After an 11-year battle against lung cancer, character actress Kathryn Joosten died Saturday at 72. Joosten became one of the most recognizable faces on television following her two-season role as the president's secretary, Mrs. Landingham, on The West Wing. Eventually, she won two of her three Emmy nominations as guest actress in a comedy for her recurring role on Desperate Housewives. The amount of work and identification she garnered truly was remarkable given that she didn't pursue acting until she was 42 and didn't arrive in Hollywood until 1983 and did so without an agent.

Joosten relocated to the West Coast from Illinois where she worked with the acclaimed Steppenwolf Theatre Company. Her first television appearance came on the short-lived cop drama Lady Blue in 1985. The shows she landed small roles on in the early days of her career included Family Matters, Picket Fences, Chicago Hope, Grace Under Fire, 3rd Rock From the Sun, ER, Roseanne, Murphy Brown, Seinfeld, Frasier, NYPD Blue, Just Shoot Me, The Nanny, Tracey Takes On, Home Improvement, Buffy the Vampire Slayer, Becker, Ally McBeal, Spin City, The X-Files and a recurring role on Dharma and Greg. Then she landed Mrs. Landingham on The West Wing and if her name wasn't immediately a household one, her face certainly was. Unfortunately, it was soon after Mrs. Landingham reached her untimely end in a car accident at 10th and Potommac, Joosten received her cancer diagnosis. If anything, that increased her workload instead of lightening it. She did a few episodes of General Hospital then she began popping up all over prime time in series such as Judging Amy, The Drew Carey Show, Charmed, The King of Queens, Curb Your Enthusiasm, Will & Grace, Gilmore Girls, Grey's Anatomy, Malcolm in the Middle, The Closer, Monk, The Mentalist and a recurring role on Joan of Arcardia as "Old Lady God." 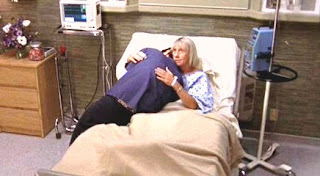 Two of my favorite Joosten appearances came in NBC comedies. The first, in the first season Scrubs episode "My Old Lady" as Mrs. Tanner, J.D.'s patient with the failing kidneys who chooses death over dialysis and whom Dorian (Zach Braff) tries to talk out of her decision only she ends up having to comfort him. She even appeared two more times, once when J.D. envisioned patients who died and wondered if any of the deaths were his fault, and in the show's finale as one of the many past character and guest stars who appear in the hallway to bid farewell to J.D. as he leaves Sacred Heart for the last time. The other series was an episode of My Name Is Earl when Earl makes it up to a former friend who went to jail for a crime he committed. Earl thinks his list item has been completed but the friend's mother (Joosten) knocks Earl out, demanding the years with her son back that Earl stole from her. I never watched Desperate Housewives, so I can't attest to her work there, but given all the other examples I've seen, I'm certain she delivered stellar work. Be it comedy or drama, Joosten demonstrated a modern example of the kind of old-style pro that you could plug into any character situation and end up with a better result.