Defeated by life, once again 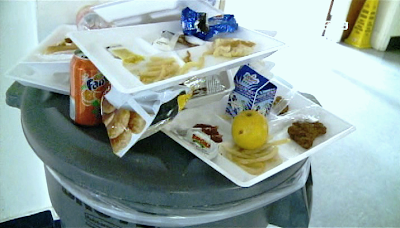 By Edward Copeland
I apologize to anyone who looked forward to reading my take on Parts 3 and 4 of HBO's documentary series The Weight of the Nation. Once again, the fates conspired against me as they seemed to do with alarming regularity. I posted what I could. It will be airing for a while, so I hope I can finish it at some point because important things need to be said. Unfortunately, I already know that my Wednesday has been shot to hell by interlopers determined to turn me into a professional patient. I won't be able to write a nice piece about the debut on HBO of the best part of the entire series: The Weight of the Nation for Kids. Geared for families, the first installment called "The Great Cafeteria Takeover" premieres Wednesday on HBO at 7 p.m. Eastern/Pacific and 6 p.m. Central.

Unlike the mammoth project that it's connected to, "The Great Cafeteria Takeover" tells the inspiring tale of students in a New Orleans school district following Katrina who form a group called Rethinkers and fight to change the meals in the schools' cafeterias. No one feels forced to fudge statistics — they just tackle the problem and solve it. I looked forward to adding my personal tales not of school food but hospital food and what these places do to cut costs. If you've been fortunate and avoided hospital stays, you probably don't realize that patient care ranks far from No. 1 on hospital administrators' list of priorities. I wish I had Rethinkeers on my side. It made me miss Treme and reminds me how I won't be able to recap both it and Boardwalk Empire if both series air at the same time and I don't get cooperation from a lot of people.

Today. I tried my best to finish my review of Parts 3 and 4, but about 3:30 this afternoon — following a morning doctor's appointment — I started getting disoriented again and nothing I wrote made sense. I had to lie down. Sunday night, I'd forced myself to stay up until the early hours of the morning and then worked most of Monday and still didn't get the review of Parts 1 and 2 posted until about 20 minutes before Part 1 aired. Tonight, my dad came in and woke me up at 7 p.m. I'd slept all that time — what usually happens when one of these episodes occurs.

I live in a house, bedridden, cared for by aging parents whose own bodies are falling apart. They deny it, but they think what I do online is a joke. They don't understand the process of writing and when I ask to be left alone because I want to make a deadline, one of them inevitably says something along the line "It's not as if you're being paid." Apparently, there would be no other reason to do such a thing. We've also switched aide services tic give me a bath and it comes with a nurse, only scheduling is a bitch and they want to turn you into a professional patient, always trying to find problems where there aren't any.

Some of you who have followed me for a while probably notice how everything I write now seems to get longer. It isn't intentional. I think subconsciously I keep writing out of fear that when I stop, it will be for good. Then I'll really lack a point for perpetuating this farce.