'The ability to forget is a gift from God' 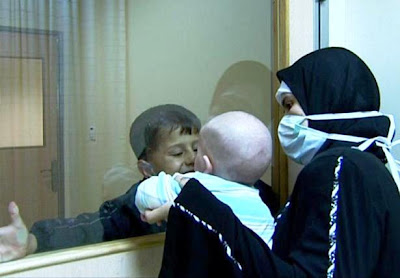 By Edward Copeland
Raida Abu Mustaffa, the Palestinian mother of a four-and-a-half-month-old baby boy suffering from an auto-immune disorder, says the title of this post to Shlomi Eldar, the Israeli journalist chronicling the baby's story when the two get into a discussion of the differences in their religions. It's a shame that forgetting couldn't be a simple solution to the centuries-old conflicts in the Middle East but Precious Life, the documentary Eldar made from the story does cast new lights on the search for peace through the story of a very sick little boy. After playing many film festivals last year, Precious Life premieres tonight on HBO.

Raida and her husband Faozi have faced this crisis before. The genetic condition that baby Mohammad suffers from also caused the deaths of two earlier daughters since they could not receive the care necessary where they lived in Gaza. Without an immune system, the baby essentially would be like those famous cases of people forced to live in plastic bubbles, but with improved technology, he can survive in less-restrictive isolation rooms and if the right bone marrow donor can be found, Mohammad might be able to restore his immune system and allow him to live a normal life. That, however, is impossible when you live in Gaza.

The only hospital in the area that can perform the procedure is in Israel and Israeli Dr. Raz Sommech gets Raida and Mohammad admitted and urges Eldar to publicize the case, in hopes that it might spark some kind of sense of common good will between Israelis and Palestinians. The biggest sticking point standing in the way isn't the enmity between Jews and Arabs but the fact that even if a bone marrow match can be found, the operation costs $55,000.

Sommech begs the parents to make an appeal on television, but they won't do it. Eventually, they relent as long as Dr. Sommech is the only person who goes on the air. The appeal works. A single, anonymous donor puts up the money and Raida is surprised to learn it's an Israeli man whose son was recently killed while serving in the Army. "The Israelis do strange things for us," Raida says. When they eventually get to talk to the donor on the phone, he tells them that since his son's death, he has chosen to sanctify all life.

In fact, during their long stay in the Israeli hospital, the Palestinian family feels weird. When Israeli soldiers in full uniform come bearing gifts for a Jewish holiday, young Palestinian cousins hide in fear because they only know to hide from Israeli soldiers. They aren't used to seeing them smiling and bearing gifts. The Abu Mustaffas actually have been getting harassment from their neighbors back in Gaza because they accept help from Jews, which make their Arab friends suspect they could be collaborators or worse.

The blockade of Gaza by Israel causes many problems along the way. When the first cousins prove not to be a match for Muhammad, they can see no way to get 27 other cousins across the border to test so they have to get blood samples in Gaza and have them couriered across the border to the hospital for testing. Luckily, they find a match, but renewed conflict with Israeli forces entering Gaza prevents the matching cousin from getting out immediately for the operation. When she gets their, she's stunned by the modern look, including grass, which she's never seen before.

The documentary takes a turn when Eldar and Raida seem to be having an innocent talk about their religions and who Jerusalem belongs to and Raida professes a hard-line view of her Muslim faith, proclaiming that life means nothing to her and that she hopes Mohammad grows up to be a martyr. It gets Eldar so mad, that he's ready to quit the project and the doctor has to talk him down, explaining she's been through so much she's probably lost her mind. Later, Eldar realizes she's also speaking to her community at home so they don't think she's turned on them because she's allowed Israelis to help her.

Another twist happens with the actual war when Israel invades Gaza in 2008 following a barrage of missile strikes from Hamas. Eldard has to cover the war from the TV studio, but Dr. Sommech gets drafted into service and the Abu Mustaffas are back home in Gaza by this time. One moment, shows an on-air reunion between the parents, the doctor and the journalist via cellphone. To make matters worse, Mohammad's condition suddenly deteriorates and they have to try to get him back to the hospital during the security crackdown.

There's even some suspense at the end when Raida turns up pregnant again and they have to keep her at the Israeli hospital to give birth, just in case the new child has the same condition the others did.

It's a moving, interesting documentary. If there's a weakness, it seems to me the father blends in the background and we don't get to know him well at all. We also never hear if the family faces reprisals from other Arabs once they return to Gaza for good.

Precious Life, which was on Oscar's short list for best documentary feature last year and won best documentary at Israel's equivalent of the Academy Awards, debuts on HBO tonight at 8:30 p.m. EDT/PDT and 7:30 p.m. CDT.