Welcome to the Sweet Life 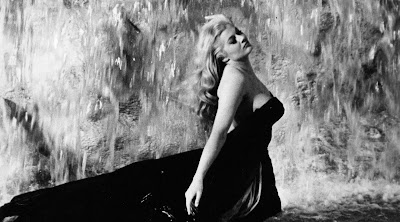 By Jonathan Pacheco
Instead of focusing on the fast pace of a life where being awake until dawn is not only ordinary but expected, Federico Fellini portrays the Italian nights of La Dolce Vita, released in the U.S. half a century ago, as if they were long dreams, odd and a bit random, difficult for the dreamer to completely comprehend, but always indicative of deeper fears and desires.

Marcello (Marcello Mastroianni), a gossip journalist in the urban jungle of Fellini's black-and-white Rome, shadows the celebrities and glitterati (as well as the wannabes) to the extent that he's practically one of them. He's a mainstay at the clubs and parties partially because what he chooses to write could dramatically damage or boost the careers of anyone in the room (one funny conversation has him revealing that, depending on how much one might be willing to pay, he could crown a young actor as the next Paul Newman or even — more expensively — the next Marlon Brando). Yet at home, desperate for his attention and affection is Emma (Yvonne Furneaux), his emotionally flimsy fiancée, a woman as fragile as they come. Her sole obsession is Marcello, but his thoughts always are elsewhere — either on his job, or more so on the women he follows — and all Emma can do (beyond suicide, which she has attempted) is pray to the Madonna for the gift of Marcello’s undivided love.

The love he does have for Emma only shows in the most desperate of times; otherwise, he’s out living the supposed “sweet life,” which, as we come to find out, he doesn’t really know how to define, and each dreamy episode in the film seems to confuse him even more. The life he truly yearns for surely can’t solely consist of the undying love he receives from Emma because half the time it suffocates him, her mad, maternal, sickly love disgusting in his eyes. There are intense pleasures such as his long night with the flighty but undeniably intoxicating Swedish-American actress, Sylvia (Anita Ekberg), a buxom goddess and a wonder of curves who takes to slowly dancing in the Trevi Fountain, her constant laughter and love for life inspiring almost all who see her to rise up and follow her in dance. Yet when dawn finally arrives, it comes with a slap to her face from her fiancé Robert (Lex Barker), who’s got a punch in the gut ready for Marcello, as well.

On and on, the journalist keeps searching, and for a man in a business where vulnerabilities are exploited and pasted on the front page of tabloids, Marcello openly shows a surprising amount of insecurity and doubt during his quest, but it’s never met with the comforting responses he hopes for. He expresses the possibility of striving for the kind of life his old friend Steiner (Alain Cuny) lives, with kids, a vast home, and a group of socialite, artist and writer friends who spend their evenings drinking and shallowly philosophizing, but the typically comforting Steiner is quick to warn Marcello of the traps of a rigid, predictable, enclosing lifestyle. Not long after that Steiner takes his own life as well as those of his two children — another punch to Marcello’s gut.

During a nighttime excursion into an old dusty castle with a group of aristocrats, Marcello speaks to Maddalena (Anouk Aimée), his occasional partner in bed, through an echo chamber connecting two separate rooms, giving him the courage to voice his desire to be with a strong, independent woman like herself, not knowing that as Maddalena listens in the other chamber, another man kisses and gropes her. Even still, just minutes later, the emotionally confused Marcello finds himself seduced by yet another woman in the group, never able to decide who he truly wants to be.

La Dolce Vita’s most painful and personal episode has Marcello’s father (Annibale Ninchi) in town looking to spend a night with his son. We and Marcello see perhaps his own future as his father insists they go to a cabaret to have a little nighttime fun. It’s a little embarrassing, but cute, how out of touch and old-fashioned his father can be, and we wonder if that will be the currently stylish, happening Marcello 30 years from now. His dad charms a French dancer with great legs before going back to her place, where he suffers a mild heart attack. In this extraordinary scene, Marcello is seemingly his childhood self trapped in an adult body, pleading for his father to come back home simply to rest and talk, but his father sits still in a chair, staring out the window, almost oblivious to the despair in his son’s voice. It’s as if Marcello were Ebenezer Scrooge, transported to his younger years by the Ghost of Christmas Past; he can plead all he wants but his father, the same man who was never available growing up, simply can’t hear him. In a brilliant move by Fellini, Marcello’s father is shot almost exclusively from behind in this scene, hiding his face from us, strengthening the film’s dreamlike qualities while subtly disturbing the audience. Indeed, the entire film has a little bit of an unnerving quality that’s only truly felt long after the film’s final frames, and that, like a quiet, still dream, becomes difficult to shake.

Comments:
It's been so long since I've seen this but having just watched Absolute Beginners, there are some aspects that I can see as homages to it if I'm remembering correctly.