And never the tween shall meet? 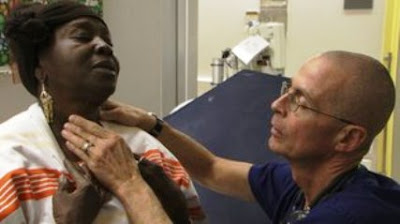 By Edward Copeland
Saturday will mark the fourth anniversary of the Virginia Tech massacre, when one troubled young man with guns he purchased legally went on a rampage on the campus that left 33 people, including himself, dead. Two-time Oscar-winning documentary filmmaker Barbara Kopple (Harlan County, U.S.A., American Dream) uses the Virginia Tech tragedy as a starting point for her new work Gun Fight, which premieres on HBO tonight. While the film certainly contains compelling moments and talks to both sides of the gun control fight, the arguments really have stayed stuck in cement for so long that it's doubtful that anyone's position on either side will change after seeing the film.

One of the main subjects of the documentary is Colin Goddard, who was shot four times during the Virginia Tech horror and was one of only seven people who got out of his French class alive. Goddard, because of his experience, joined The Brady Center to Prevent Gun Violence. He shows emails he received after mass emailing politicians in one of the many states considering allowing students to carry guns on campus, which makes the usual argument that if he or one of his classmates had been armed, things might have been different.

"I love how he know that. When you are sitting there and thinking about it and writing it, it's simple, but when you're there and a man's pointing a gun at you and about to you, it's another thing."

There's also interest in what former NRA spokesman and gun lobbyist Richard Feldman, who became a pariah in the gun rights community by leading the gun manufacturers to make a deal with the Clinton Administration on child safety locks. As he says, the NRA views compromise as a dirty word. It reminds me of a poli-sci paper I wrote in college on the NRA that I titled "The Right to Be Overbearing About Arms."

That was more than two decades ago and that's part of the problem with Gun Fight. Nothing ever changes. We've had plenty of new tragedies since Virginia Tech with new calls for reasonable gun laws, but they go nowhere because the NRA has such a stranglehold on the politicians in terms of campaign cash and turning out voters.

In the end, Gun Fight will illuminate the viewer as he or she watches and then the next day, every thing will go back to dysfunctional way it is.