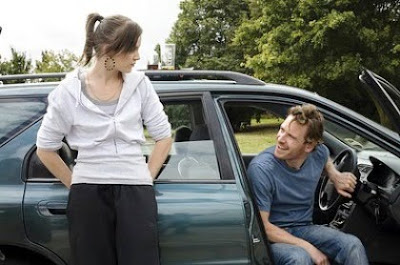 By VenetianBlond
Fish Tank won a Cannes Jury Award in 2009 and the BAFTA Award for Best British Film in 2010. Andrea Arnold’s second feature, it’s a fearless endeavor by both the writer/director and the actors. The director trusts that she can create a feature by observing moments, and the actors create their flawed characters with incredibly natural performances. Given that the lead, Katie Jarvis, had never acted before, it was perhaps the only performance she could have given. It’s a wonderful thing that it was brilliant.

15-year-old Mia lives with her mom (who looks young enough to have been Mia’s age when she had her first daughter) and sister in a rundown apartment complex in Essex. She fancies herself a hip-hop dancer, so she practices her moves when she’s not picking fights, fighting back when a fight is picked with her or screaming at her mom and sister. She’s been kicked out of regular school and referred to reform school. Her mom brings home Connor, played by Michael Fassbender, and it’s clear that Mia is struck by his physicality and maturity. Her screamed insults slide off of him, and he insists on relating to her as a human being.

She sees an audition notice in a window and Connor encourages her to make the audition DVD. He tells her she’s a great dancer. All she ever hears otherwise is how awful she is, so she does indeed go for it. When things go wrong, they do in unexpected ways. Mia wins an in-person dance audition, which is surprising because she’s neither talented nor particularly passionate when she dances. When she gets there, it’s not what she expects. Connor does give her the attention she craves, but it’s not just inappropriate, it’s downright wrong. The third act has a twist and then Mia’s impulsiveness takes her in a dangerous direction.

Jarvis stalks through the film as if she dares the very air to touch her. Her defenses are so strong, she attacks without reason just to avoid having to deal with anyone, but the actress also conveys the pain underneath her behavior and it’s not hard to see where it comes from given her mother’s devout lack of parenting. When she’s relaxed, she looks like the little kid she has just so recently been. Fassbender almost brings an actor’s touch to his performance, but he manages to keep it dialed back and just let the relationships unfold. He’s got a tricky job to do, from playing the mother’s party boy, to being Mia’s ally, and then becoming more.

Although Fish Tank is not particularly plot heavy, the film unfolds inexorably. There’s just no way that things will go right for this family. Even the very sky lowers down upon them, but that makes the sweet moments, when they occur, that much sweeter. It’s too bad the film is marred by a clunky final shot, too obvious by half. It’s as if the director could sustain her audacity for only so long. Credit where credit is due, however, for everything that came before.

Comments:
A good movie, elevated considerably by Fassbender. Sort of a grittier, contemporary "An Education."