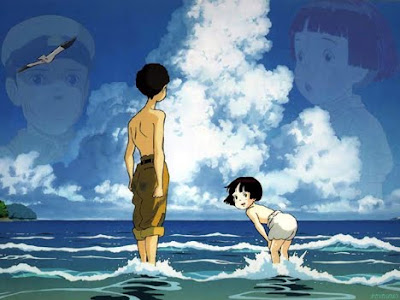 By Squish
The opening line of Grave of the Fireflies is "In 1945, on the night of September 21, I died." This character, a teenager of about 16, starves to death in the street, surrounded by commuters walking around him.

The rest of the film is a telling of how Seita reached this point. We return to his family home. His father is away, an officer in the formidable Japanese fleet. His mother and 5-year-old sister live in a typical wooden-homed village. Soon the American fire bombers raze their home and their mother. Seita and Setsuko are homeless, but still have an aunt in another village that they move in with.

This new life begins well enough, but as rations thin and their aunt begins resenting the children for their stomachs, things get difficult. Though some of the film focuses on the relationship the two have with their aunt, most of Grave of the Fireflies is about Seita and Setsuko's days together, with the "futility of war" theme as one of the least-muddied messages you've seen in any film ever made.

The film has plenty of joyous moments, sunny days spent idle bathing, scavenging and eating, but as the despair of their situation grows ever more dire, those happy moments only serve to make the tragedies all the more poignant. The animation is absolutely beautiful and the added recurring symbolism of fireflies adds a wonderfully poetic touch to the story. Seeing the warm glow of the creatures against the night sky juxtaposed against a sky filled with firebombs deserves a gracious tip of the hat.

What stands out most for me is the voice acting of Ayano Shiraishi. Quite obviously she was as young as the 5-year-old girl she portrayed, and after this second viewing, I still believe her voice acting is one of the tenderest, most pathos-filled voices I've ever heard. Should you pick up this DVD animated by Studio Ghibli, do yourself a favor and watch it in its original Japanese with subs, as the English-dubbed version grossly pales in comparison.

Grave of the Fireflies currently sits in the center of the IMDb Top 250 bell curve at No. 129, a well deserved position in the grand scheme of film.

The biggest tragedy of Grave of the Fireflies is that it hasn't had the benefit of being given the Blu-Ray treatment. Let us hope this is remedied soon.