If you want to swim, you have to get in the water 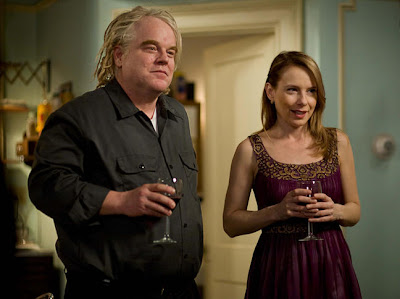 By Edward Copeland
As great a city as it is and despite its large population, no city makes a single person feel more alone than New York. That's certainly the case for a middle-age limo driver named Jack (Philip Seymour Hoffman, making his directing debut) in Jack Goes Boating.

Jack's job as a limo driver comes courtesy of his uncle, who owns the company, and that's where he's developed a friendship with Clyde (Ortiz), a fun-loving, superconfident guy who is determined to change Jack's luck with women. Clyde's wife Lucy (Rubin-Vega) is similarly inspired to help find a match for Connie (Ryan), a co-worker at the funeral parlor where she works, so the spouses conspire to bring these lost, awkward souls together.

Connie, to put things mildly, can be a bit of a strange duck, with a run of bad luck, including being assaulted on the subway and being felt up by her boss. Ryan plays the part to eccentric perfection, especially at the film's climax when she must finally take charge of an unbearable situation at a dinner party.

Jack comes tailor-fit for Hoffman. He's a man not just uncomfortable in his own skin, but uncomfortable in skin in general, but he's determined to accomplish things such as learning to swim since Connie mentioned wanting to go boating when the weather's better. He also thinks that he should cook for her and Clyde gives him the name of a pastry chef he knows at the Waldorf Astoria, leaving out the fact that the man used to date Lucy years ago and Clyde still harbors bad feelings about it.

The action culminates with the big night when Jack prepares to unveil his new cooking skills at a dinner party for the two couples, only Clyde's drunken jealousy and a shared smoking of hashish turns things into a disaster. The four actors all turn in superb performances, particularly Ryan and Rubin-Vega when she finally gives Clyde the dressing down he deserves.

As a director, Hoffman shows some visual flair and, unless you knew ahead of time, it might not be readily apparent that Jack Goes Boating began life as a play and not just as a small indie.

It's not a great film, but its performers definitely make it worth seeing.