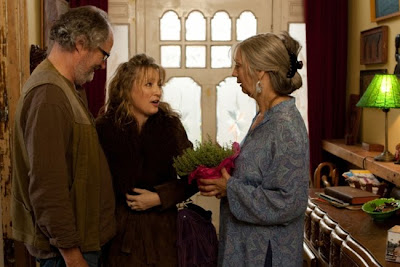 By Edward Copeland
When a new Mike Leigh film opens, it's wrong to say you "watch" it. "Eavesdrop" seems to be a more appropriate verb, especially in the case of Another Year.

With Another Year, Leigh isn't telling a story as much as letting you observe a handful of characters. They aren't particularly fascinating characters, at least in usual movie terms, but seem defiantly ordinary. However, Leigh's fictional characters and the talented performers who inhabit them never fail to capture your attention and hold onto it.

Tom and Gerri (Jim Broadbent, Ruth Sheen), a longtime, happily married couple, serve as the center of the small universe around which Another Year revolves. Tom works as a engineering geologist, Gerri as a counselor and they have a 30-year-old son, Joe (Oliver Maltman).

Even though the film will keep its focus on Tom and Gerri and those who orbit their galaxy, they aren't even the first two characters we see on screen. Instead, Leigh opens as one of Gerri's colleagues Tanya (Michele Austin) counsels a woman, Janet (Imelda Staunton, in a great two-scene cameo) about her insomnia and dissatisfaction with life in general. When Tanya asks Janet to rate how happy she is on a scale of 1 to 10, Janet answers, "One."

After Staunton's character vanishes after her two early scenes, some viewers may wonder what the point of her scenes were, but she's there to set up Another Year's theme: Happiness, or the lack thereof, specifically in the form of Gerri's friend and co-worker Mary (the marvelous Lesley Manville).

Mary could be a tragic figure, except unfortunately there are too many Marys in the world (and even worse, not enough Toms and Gerris, though even they have their limits). Mary is single, easing past middle-age and a functional alcoholic — and she clings to Tom and Gerri as if they were a life preserver which, in a way, they are.

It's easy to see why Mary relishes the time she spends at her friends' home — the warmth it emits practically emanates from the screen and wraps itself around the viewer as well. Mary dreams of a life that includes a mate, but her fantasies exceed her dreams. She puts off the advances of another damaged friend of Tom and Gerri's, Ken (Peter Wight), and somehow has imagined herself as a possible mate for Joe.

One of the film's best scenes comes when Joe brings home his hyperactively buoyant new girlfriend Katie (Karina Fernandez) and Mary drops by (unexpectedly, as she usually does) and Leigh builds tension around the simple serving of a cake. Leigh films it in a series of slow closeups of all the actors in the room, escalating the strain that lies beneath the surface.

For a plotless film such as Another Year, the success or failure of the enterprise largely falls upon the strength of the casting and Leigh doesn't have a weak link in his ensemble.

Manville is a wonder, milking the humor and pathos out of Mary, hitting just the right note at the right time. She can make you feel for Mary one moment and make you want to slap her silly the next.

The always dependable Broadbent gives the best performance he's given in ages as Tom and Sheen proves just as good as the level-headed Gerri and as a pair, Sheen and Broadbent make a believable couple.

In addition to all the other performers named above, fine work also comes from David Bradley as Tom's older brother, facing life as a widower, and Martin Savage as Tom's troubled nephew Karl.

Leigh has the audacity to tell the truth that not everyone's life turns out well and that some marriages do miraculously go on blissfully for decades and to mix them in the same movie.

While I was writing this review, wanting to doublecheck one character's name and the performer who played her right, I was surprised by the negative reviews of Another Year that I found that found it "smug," full of caricatures (one admitted "hating" all the characters) and even criticized the acting — and some of these critics were ones who fell all over the torture called Blue Valentine or the disaster Nicole Kidman inflicted upon Rabbit Hole. I guess a movie marriage must be in a state of disrepair or there's something wrong with the film.

You would think as damaged as the character of Mary (or Ken or Ronnie for that matter) are would satisfy their need for suffering. Who knew Leigh was being courageous by acknowledging that not everyone in the world finds a mate, even for a bad relationship? That people like Mary do become dependent on friends like Tom and Gerri because it's as close to intimacy as they get and it can get on those friends' nerves. It's sad, but it's true.

I've usually found Leigh's films to be hit or miss, but always with solid performances. In Another Year, everything comes together and he produces one of his best efforts, striking every chord perfectly. Most films work best when they don't have any extraneous scenes, but Another Year works so well by taking the opposite approach. Many parts don't seem pertinent as you watch them, but Leigh's thinking several moves ahead of you and eventually you realize why that sequence, like all the others, were absolutely essential.

Comments:
Late getting back to this one to say that I think you nailed it. I especially agre about the pleasure of watching Boradbent play someone normal, human again. It's been too long. This is one of those movies that peaks and valleys between arresting moments and everyday boredome. Thankfully there are enough of the former to make that latter tolerable.

I had to watch this coma inducing piece on separate nights. It had to be taken in small portions ere vomit rise in my throat.

A truly ugly bunch of actors, except Roney maybe, gravitate towards Tom, the inane mumbler and his wife Gerry, the no-chin wonder, seeking solace and reassurance. Why they do so, I could not decipher.

In a lighter vein, Tom and Gerry bear an unmistakable resemblance to Bob and Margaret Fish, of the Canadian/Uk animated television series. That couple, but grown old and insufferable.

Mary's character kept doing ugly things with her mouth/lips, throughout too many of her scenes, or should I say, her too many scenes.

And yet, hers is the most significant character in the film. Her loneliness is palpable. She hungers to be ensconced in what she idealizes as the perfect group/family.

The family's eventual rejection of her, ridicule and hypocrisy towards her, serves to explore the meaning of tribalism.

The final shot of Mary as outsider/beggar at the feast may be tragic; however, I just don't care enough about the lot of them to delve much more into it.

Finally, I finished watching Leigh's "An Endless Year" tonight. It's been a chore, an ordeal. It hurt.

Heretofore, only Rohmer's could inflict such pain on me.

May I say once more how very much I admire your writing.

I don't think they rejected Mary at all. When she had made her scene when their son had brought his new girlfriend, their tolerance level had sort of been reached but at the end they still let her come back. She had stayed away because she knew what she had done was out of bounds. To call characters "ugly" based on physical characteristics seems unduly harsh and it's refreshing to see films that revolve around people who look like those you might encounter every day instead of the types made from kits in most Hollywood blockbusters. I loved Another Year because films don't usually dare to show normal, happy couples or the fact that many people go through their lives alone. It's a well-acted, well-written anecdote for the usual Hollywood myth machine.

Mary was definitely rejected by that band of hideous, smug, self-loving people. I forced myself again to view the final shot of Mary and, yup, indubitably she's an outcast, in no way a member of the tribe and finally realizes she never really was.

The widowed brother is portrayed as a reluctant member, but he's 'blood' and one gets the distinct impression he'll be staying for a long time, or as long as he likes in any case.

As I remember Mary's reaction to the fact she'd been deluded in thinking she could seduce the son was one of deep shame and not a little anger.

Hence, her 'misbehaviour' at meeting the new homely girlfriend, after all the wasted flirting she'd done may be considered entirely natural.

Mary plays many roles. She tries hard to be Gerry's work mate, best friend and confidant. She switches to trying hard to be the daughter Tom & Gerry never had. She made a fool of herself trying hard to become their daughter-in-law etc.

None of the roles succeed in providing her with a real and permanent place in their inner sanctum.

As for the "Hollowood myth machine" I much prefer European films. What Hollowood considers "pretty faces" I often find fake and unattractive. Insert any "Murikan superstar's" name here ______.
Yet there are many ill-favoured actors I find intriguing and lovely to watch. Unfortunately, other than Roney, there were none in this film.

I know. I claimed to be disgusted with this film, but I do go on about it, don't I?

Well, it was you got me started!
It was an honour to receive your reply.