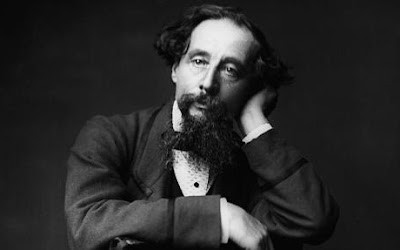 By Damian Arlyn
While perhaps it does seem unimaginative and a downright cliché to say so, nevertheless I must admit that Charles Dickens is one of my favorite writers. And yet the reason I cannot recall when I first was introduced to this wonderfully witty wordsmith is the same reason that it feels vaguely silly to be writing today about the bicentennial of his birth: namely, that it seems as if Dickens has been there always, from the very beginning, right beside me, amusing me with his colorfully unique and eccentric characters, shocking or moving me with his deliciously complex stories and captivating me with his musical and, of course, plentiful prose. Indeed, Dickens is one of the most verbose writers I've ever encountered in my many readings, relaying such intimately atmospheric details (including the location of the pitiful pawn shop where the kettle, out of which the maid just poured the steaming hot green tea for the nervous little boy, was purchased for the beggarly sum of twopence) that he was able to weave a rich, textured and thoroughly engaging world with his words. Arguably, the greatest author of the Victorian era, his influence can be felt in all forms of fictional storytelling even today and a proper tribute to him and his art could not possibly be done satisfactorily without some sort of pathetic attempt to emulate his distinctively loquacious style in the opening paragraph of said tribute. Since I already have embarrassed myself sufficiently with such an endeavor, I shall cease to imitate this great genius and write of his life in my own humble style from this point forward.

Charles John Huffam Dickens was born Feb. 7, 1812, the second of eight children, to John and Elizabeth Dickens. Though his fledgling imagination was stimulated by avid reading, he was forced to leave school at 12 to work at a Boot Polish Factory to help support his family while his father sat in debtor's prison. In his teenage years, Dickens worked as a junior clerk at a law office, but it was his experience as a journalist in his early-mid 20s that led more directly to his ultimate calling. Under the pseudonym of "Boz," Dickens' first novel, The Pickwick Papers, was published in 20 parts over 19 months (beginning in March 1836 and ending in October the following year) after which it was put out in a single volume. This unfolding of the narrative serially and subsequent printing in book form (a common literary practice at that time) was how most of Dickens' novels also would be released to the public and it allowed for a certain freedom and spontaneity in his writing since he did not (as many authors did) write out the entire story beforehand but rather more or less created it as he went along. Pickwick was a huge success, providing Dickens with the money he needed to marry his then sweetheart (Catherine Hogarth with whom he had 10 children), and soon was followed by Oliver Twist (1837-39) and Nicholas Nickleby (1838-39). As with all Dickens' works, it did, however, have its detractors, who criticized the long-winded writing style by suggesting that Dickens was paid by the word…a myth which has, unfortunately, followed the great raconteur to this very day.

One of the major themes found in Dickens' stories was the plight of the poor. Dickens' sensitivity to the subject of poverty was perhaps first inspired by his own experiences in his early life. In particular, the dirty, cruel and oppressive working conditions at the Blacking Warehouse where he worked as a young man disgusted him and opened his eyes to the inhuman manner in which the poorer classes were handled by society at large. This anger at the severe inequality of the day manifested itself in his personal life as well through his philanthropic efforts. He helped found the Urania Cottage (an institution characterized as a "home for the redemption of fallen women"), gave generously to those less fortunate whom he encountered on the street and became, as G.K. Chesterton called him, "the spokesman for the poor." Dickens' commitment to, in the words of Jesus, "do unto the least of these," was tied closely to another major theme in his writing (and one of the first elements I personally connected to as a reader): his faith. Raised as an Anglican and later leaning toward a more Unitarian worldview, Christianity was clearly an important reality in his life and his work. Nowhere is this more apparent than in what is perhaps his most beloved and iconic tale, "A Christmas Carol": a story of repentance, forgiveness and redemption. Though it is true that Dickens didn't always practice what he preached (he had, for example, a decades-long affair with an actress named Ellen Ternan while still married to his wife and his anti-Semitism was demonstrated clearly in his depiction of the Fagin character in Oliver Twist), that does not create doubts in the mind of this reader as to the authenticity of his belief.

In his later years, Dickens' writing became more mature and more carefully planned out (though certainly no less successful) than his earlier works. Stories such as David Copperfield (1849-50), Bleak House (1852-53), Hard Times (1854), A Tale of Two Cities (1859) and my personal favorite, Great Expectations (1860-61) were decidedly more serious, darker, less humorous and less fantastic than his earlier works. Dickens also, despite his clearly failing health, began doing public readings of his own stories. His readings were very profitable (though in his typically liberal style, much of it was donated to worthy causes) and quite compelling since he was apparently a very effective reader. It is said that while enacting the passage from Oliver Twist that describes the murder of Nancy, women would faint in the aisles. Dickens died at home on June 9, 1870 from a massive stroke he had the previous day. He was buried in Westminster Abbey. The nation and the world joined in their mourning of the loss of one of the 19th century's most beloved and prolific writers. Today, the stories he told and the interesting characters he created (many of them inspired by real people whom he actually knew) are virtually immortal. Who doesn't know Ebeneezer Scrooge, Bill Sykes, Madame Defarge, Miss Havisham and many others? Furthermore, the stylized Victorian world that flowed forth from his untiring pen was so unique that, like other visionary artists who would follow him (including Alfred Hitchcock), he was given his own adjective to describe them, "Dickensian." As British biographer Lord David Cecil said of Dickens in 1935: "It does not matter that Dickens' world is not lifelike; it is alive." Today, two centuries after his birth (and more than 140 years since his death) his world still lives.

Comments:
It's such a curse to be interested in so many artistic areas all my life and not having the chance to truly conquer them all. Books and movies always were my main focus. (TV too when I was young, but I'm so selective now there's hardly anything I watch regularly.) Since movies became my major preoccupation, I tried to keep up with my literary side for a while, but my reading really has fallen off. You'd think now, stuck in a bed, not hampered by a job, I could gain on the reading front, but that hasn't been the case. I'm glad I always was selective (and eclective) about music. Sure, that means I couldn't name a Lady Gaga song to save my life, but I'm OK with that. Knowing that I've only read "A Christmas Carol," Oliver Twist and Great Expectations by Dickens, that I find more troubling. Hell, I've even fall behind on my Philip Roths, having not gotten around to read his two most recemt movels. I haven't read Updike's final novel, but that is by choice. I got it shortly before his death and I like the idea of knowing that I always have one more there on standy when I need it. Happy birthday, Mr. Dickens.

I don't know if this helps or not, Ed, but I also find it hard to get up the energy, or set aside the time, to read as much as I'd like to. I've never really been a very good reader (I've always been more "visually-oriented"). I was forced to overcome that obstacle a little when I was in college (where I read more than I ever had in my entire life), but since then I have sort of fallen back into my old ways. What I do find helpful, though, is listening to audiobooks (which I download from audible.com) and I know that Dickens' writing would be especially rewarding and satisfying in that format.