"There will either be dialogue or there will be a coup" 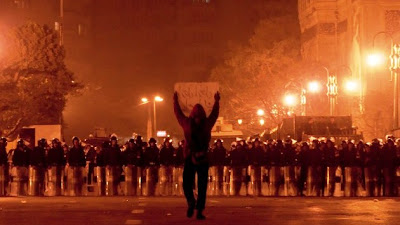 By Edward Copeland
One year ago today, answering the call put out by fellow fed-up Egyptians on social media, thousands of that country's citizens from a broad spectrum of classes and jobs descended on Cairo's Tahrir Square to demonstrate against the 30-year reign of President Hosni Mubarak. Young Egyptian-American journalist Sharif Abdel Kouddous, who attended Duke University in the U.S. and came from a family of famous Egyptian journalists, felt he had to return to his homeland to cover what promised to be a momentous event. The documentary team that followed Kouddous produced In Tahrir Square: 18 Days of Egypt's Unfinished Revolution, which premieres tonight on HBO2.

The short documentary opens by contrasting images of videos of brutal interrogations by Egyptian police with a television interview with Mubarak where he claims that the Egyptian people have the freedom to speak as well as newspapers at the same time he admits he employs harsh punishment as the law allows.

Kouddous, who lives in the U.S., works as a correspondent and producer for the American radio and TV program Democracy Now!, which airs on more than 800 radio and TV stations. The Kouddous name carries real caché in Egyptian journalism going back several generations. Sharif's grandfather's videotaped arrest in January 2011 is considered one of the key events that precipitated the uprising. It was his grandfather's 11th arrest during Mubarak's rule. So much for free speech and newspapers.

The documentary, directed by multiple Emmy winners Jon Alpert and Matthew O'Neill whose most recent project for HBO was Wartorn: 1861-2010, incorporates footage from other sources as well the original material filmed following Kouddous.

The first night of the Tahrir Square protests, Mubarak's forces cracked down hard, even using rifles with green laser sights at night to shoot demonstrators. In all 848 Egyptians were killed, but they couldn't be driven from the square. Some scenes amaze as they break up streets and sidewalks to create rocks to throw back at police and military.

What In Tahrir Square brings out the regular news coverage in 2011 didn't was the access that Kouddous could gain just by his name and the facts that he'd report that led to the breaking point such as the fact that the average Egyptian lives on less than $2 a day while being fully aware of the government corruption and how most of the foreign aid Egypt received ended up in Mubarak's personal coffers.

Because of the Kouddous' prominence. Sharif wasn't part of a family living on $2 a day when he lived in Egypt. The young reporter describes Egypt as a "stratified society" where class plays a large role so he's fascinated when he's in the middle of the Tahrir Square protests to be mingling with people he never would have met while growing up — something he saw a positive vision for a future Egypt.

When Mubarak gives his third address during the protests, Egyptians anticipated that he was about to announce his resignation. Instead, he promised some vague reforms but didn't plan to go anywhere. The crowds went wild — holding their shoes in the air in protest and making plans to march on the presidential palace and the state-run television center. On the eighteenth day of the protests, the country's vice president went on TV to announce that Mubarak was stepping down and the military — which had earlier ceased following orders to fire on demonstrators — would rule a transition government until free elections could be set.

A funny moment comes after the announcement about Mubarak when a jubilant member of the Muslim Brotherhood cheers to Kouddous, "Allah by himself brought down Mubarak." When the man moves past, Kouddous shakes his head and says, "No. We did."

What In Tahrir Square lacks is anything to show that everything ended happily the moment Mubarak stepped down. They don't even include words on the screen at the short documentary's end indicating the recent troubles in Egypt as its citizens have grown impatient with the transition to a form of democracy and still live under military rule. The film also fails to set the scene of fall of the Tunisian leader that preceded Tahrir Square or mention the spread of the Arab Spring into other countries in the region.

Still, those faults don't sink In Tahrir Square as a whole. It premieres tonight on HBO2 at 8 p.m. Eastern and Pacific, 7 p.m. Central.