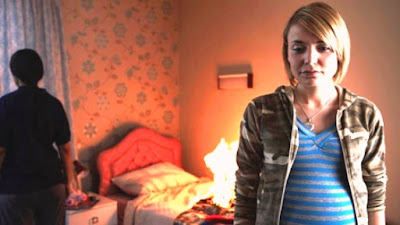 By Edward Copeland
Each year brings documentaries that take an entirely new approach to nonfiction films. In recent years, we've seen that in films such as Waltz With Bashir and Chicago 10 or the questionable merging of fact and fiction in Exit Through the Gift Shop. In 2011, the documentary that takes a new approach to nonfiction filmmaking is The Arbor, which tells the story of the late British playwright Andrea Dunbar and her children. Director Clio Barnard takes a theatrical approach to a chronicle of a playwright and her family by interviewing the surviving figures of the story but then re-enacting the events and having performers lip-synch their words. The approach gives the viewer an odd, unsettling feeling, but it also captivates in its own strange way.

Born in 1961, Andrea Dunbar grew up in the bleak world of the housing project known as The Arbor in West Yorkshire, England, where she indulged in a life full of alcoholism, promiscuity and early creative success, penning the first of her semi-autobiographical plays set in that area at 15 as a school project. Titled The Arbor, the play didn't receive a staged production until 1980, by which time she'd completed a second play, perhaps her best known since it became a movie, Rita, Sue and Bob Too! That play was staged as part of The Young Artists Festival at the Royal Court in London in 1982. Film and television director Alan Clarke was taken by the play so much that he asked Dunbar to turn it into a screenplay, which she did, and Clarke's film version premiered in 1987. Dunbar's third and final play, Shirley, debuted the year prior to that. By 1990, Dunbar was dead, the victim of a brain hemorrhage.

Before Andrea Dunbar turned 23, she had completed three other productions — two daughters and a son by three different men — and it's the legacy of Dunbar's troubled life that she left on these children, particularly her oldest daughter, Lorraine. Lorraine's father is a Pakistani man and her mixed-raced heritage doesn't go over well in the largely racist housing project.

This story would be merely sad and tragic if not for the unique method of presentation that first-time director Barnard employs. Sometimes, it can be quite eyecatching as the actress mouthing Lorraine's story of fire that began in her and her sister Lisa's bedroom tells the story while the visuals re-creates the incident. In addition to having performers act out interview subjects' testimony, Barnard also includes scenes of actors reading sections from Dunbar's plays as well.

By the time The Arbor (the documentary, not Dunbar's play) ends though, the film feels as if it is little more than its gimmick. Outside of the U.K., Andrea Dunbar isn't a particularly well-known playwright and the story of her short life and what happens to her daughter Lorraine certainly is sad, but it isn't one that seems unique enough to warrant a documentary. If it weren't for Barnard's unusual approach to the material, I don't see much reason for The Arbor's existence.